Books: The Story Of Asphalt, As Much A Part Of Brooklyn As Anything 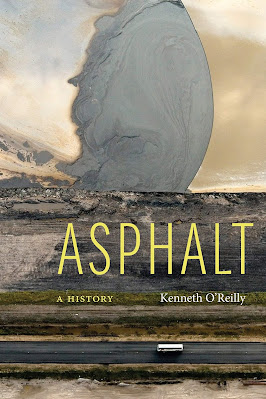 We walk on it, run on it, play on it, and with increased outdoor dining, think nothing of eating a meal at a table on it. This indispensable part of urban life is asphalt.

In the engrossing new book, Asphalt: A History, Kenneth O'Reilly traces the history of this everyday substance from, in both its natural and processed forms, from ancient times to the present.

Asphalt has been used by humanity for thousands of years, going back to when this humble hydrocarbon possibly glues the first arrowhead to the first shaft. It exploded in use, and created plenty of changes in how we live, when it emerged as a pavement.

Since the 1920s, the development of the automobile and blacktop went hand in hand, and allowed an unprecedented amount of Americans to experience the beauty of their land from the Adirondacks to the Rockies and beyond. Blacktop roads, runways, and parking lots make up the central arteries of our environment, which created a distinct "political territory" and a "political economy of velocity."

While O'Reilly makes the argument that asphalt creates our environment, he believes it also eventually will threaten it. Looking at the role it plays in economics, politics, and global warming, O'Reilly explores the contribution of asphalt to the history, and future, of America and the Earth as a whole.

O'Reilly writes of asphalt's increasing amount of uses in this excerpt: "Blacktop in the United States is so visible and so widespread that it sprouted a depaving movement and inspired such questions as this one: Would the suburbs have grown so quickly without asphalt? According to John Stilgoe, a landscape historian, before the blacktop age suburbs existed primarily in the imagination of developers. Now things are quite different. 'Once a property is subdivided,' environmental consultant Robert Lenzner emphasizes, 'asphalt is the last crop.' Beyond covering roads and parking lots in horizontal sheets and lines, over 85 percent of airports that have paved runways feature asphalt. (International airport runways are an exception; they are often concrete, but there are many exceptions beyond Da Nang International Airport.) And asphalt's horizontal sheets and lines are present in such other places as driveways and alleys, palygrounds and golf-cart paths, tennis and basketball courts, automobile racetracks and four-hundred-meter running tracks, the expanse of county and state fairgrounds, and so on.

Asphalt's sloped sheets and lines are most often present on residential roofs in the form of asphalt shingles (especially in North America, where asphalt shingles dominate). In hundreds of other nooks of daily life, asphalt is present if largely invisible. How many people know that asphalt lines many reservoirs, landfills, sea walls, dikes, groins, and funerary caskets; that farmers and others brush it on wooden fence posts to inhibit rot; that automobile manufacturers coat an odd part here and there with aspahlt to inhibit noise and vibrations; that shotgunners scatter asphalt when hitting clay pigeons; that railroad workers use asphalt to stabilize or replace traditional track-bed ballast; or that a German company pioneered the use of asphalt as the central core material for embankment dams? And new uses are always on the horizon. For example, a type of porous carbon derived from asphalt has shown promise in enabling high-capacity lithium batteries to charge faster.

Asphalt Americana is nearly as ubiquitous as blacktop and shingles. It includes, among many other examples, the Asphalt Yacht Club (a clothier for those who move on such blacktop-dependent products as skateboards); Asphalt Jesus (a book); Asphalt Xtreme (a videogame series); Asphalt Orchestra (a marching band); Asphalt Green (a fitness-center complex anchored on the site of New York City's former Municipal Asphalt Plant); Asphalt One (the George H.W. Bush family's campaign bus); a plastic model kit for the U.S. Army workhorse truck during World War II, complete with an asphalt tank in the bed; the asphalt spreaders' boots on the monster in the classic film Frankenstein (1931); a Marilyn Monroe poster for The Asphalt Jungle (1950); and the album cover for the Beatles' Abbey Road (1969). Whether romanticizing blacktop's encompassing presence or despising it, these cultural sightings are nothing new. Willian Dean Howells chronicled his New York City walks a century ago with a reference: 'These pretty, winding growths which I had been finding all the season long among the streets of asphalt.' Nor are cultural nods confined to the United States. The flaneur and other bourgeoisie loungers on derives in Berlin, wrote Walter Benjamin, a Jewish Marxist who fled Germany in 1932, 'botanized the asphalt.' Naturalists of the unnatural environment, they were ever observing, collecting, identifying, and preserving specimens.

Asphalt's second basic characteristic as a material put to use by humanity is its duality. Because asphalt is nearly everywhere we are, it is as contradictory as we are...a substance where incongruities fester. It symbolizes both hope and despair. 'If the whole world were to be covered with asphalt,' Russian writer Ilya Ehrenburg mused in defense of fellow dissident Boris Pasternak, 'one day a crack would appear in the asphalt; and in that crack grass would grow.' Harvard once offered a course that explored the dichotomy between asphalt's omnipresence and its status as a hated material. One recent reason for that hate, given the mining and melting of natural asphalt in Alberta, is the threat of environmental horror. Yet the blacktop that covers so much of the earth's surface not only traps hydrocarbons. It is recyclable nearly in its entirety."