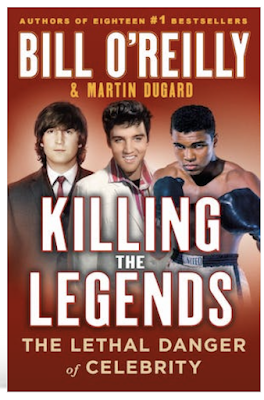 Killing The Legends: The Lethal Danger Of Celebrity

By Bill O'Reilly and Martin Dugard

This is the 12th book in TV journalist and radio host Bill O'Reilly's Killing series, which he has written with Martin Dugard, who has authored several bestselling books of history, including Taking Paris and Taking Berlin. It comes just months after the release of Killing the Killers (click here for our review), which focused on the War on Terror and became a #1 New York Times and national bestseller.

In Killing the Legends, O'Reilly and Dugard focus on the lives, legacies, and tragic deaths of three of the most iconic people of the 21st century, Elvis Presley, John Lennon, and Muhammad Ali.

Elvis was a singer and actor who dominated the 1950s and '60s, Lennon was a member of The Beatles and then had a very successful solo career, and Ali was one of the greatest boxers of all-time. They changed the worlds of music, film, and sports, but their influence went far beyond the entertainment and athletic fields.

They were known and inspired people around the globe, they each became larger-than-life figures, and they were on top of the world until their lives spiraled out of control. Their immense success led to failure, addiction, or unhappiness that led them to reinvent themselves and their talents. In the end, they were all isolated by their fame, and it was their inner circles, full of people they trusted the most, that contributed to their downfall.

"Ironically, these three legends had much in common despite living vastly different lives.

"All three men achieved vast wealth and fame. All possessed talent and charisma. All surrendered their autonomy to others.

"And that capitulation sealed their destinies."

Elvis died suddenly on August 16, 1977 in Memphis, Tennessee, and O'Reilly and Dugard write of his passing, "The King is dead.

"Nobody knows-not yet. Elvis Aaron Presley lies alone on his bathroom floor, his depleted body struck down by years of narcotics and unhealthy living. Death came so suddenly that he could not even call for help or struggle to his feet. Thick red shag carpet muffled his fall from the commode. So, while Presley's girlfriend sleeps peacefully just a few feet away in the master bedroom, she is completely unaware of the corpse on the other side of the bathroom door.

"Elvis, as he was known all over the world, was forty-two at the time of his death. He was once widely acclaimed as the King of Rock 'n' Roll. But by this point, the King, as he was still called by legions of fans, was no longer relevant in the music world. Presley had become an oldies act, still performing hits from a decade and a a half earlier after being displaced from the Top 40 pop charts by bands like the Beatles and the Rolling Stones. Recently, he was also eclipsed by rising stars like Led Zeppelin and Bruce Springsteen.

"Although he still made millions of dollars playing Las Vegas and other concert venues, Elvis Presley was a physical mess. In his early twenties, he was a virile and handsome man, a sex symbol whose hit records and movie roles made him one of the biggest stars on earth. But at the end, that was no more. His slide into debauchery was long and pronounced, and the sycophants who depended on him for money and prestige did nothing to stop his decline. Onstage, Presley, though still charismatic, had become a garish caricature of himself: swollen, obese, and often unable to remember lyrics due to a barbiturate addiction. And while Elvis was still a relatively young man, his drug addiction and gluttony destroyed his overall health and aged his body well beyond its years."

Lennon was killed in New York City on December 8, 1980 while entering the Dakota apartment building near Central Park with his wife, Yoko Ono. The shooter was Mark David Chapman, a twenty-five-year-old security guard from Texas, a huge Lennon fan who was waiting among other fans for him to return. After he shot Lennon and was waiting to be arrested, he opened a copy of A Catcher in the Rye, a book he was obsessed with, and sat down on the curb to read. Lennon was just 41 years old.

Ali died on June 3, 2016 in Phoenix, Arizona, at 74 years old, after suffering for years from Parkinson's disease, a result of the nearly two hundred thousand blows to the head and torso he suffered during his legendary boxing career. Ali's wife, Lonnie, said he went to the hospital with a "little cold," but once his serious condition was quickly diagnosed, his body couldn't fight the infection, and he was moved to intensive care and placed on a ventilator.

"The cause of death is officially septic shock, with some believing Ali's Parkinson's was a contributing factor," O'Reilly and Dugard write. "But as with Elvis Presley and John Lennon, the downfall of this legend was brought on by other human beings."