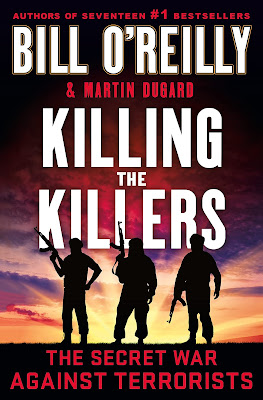 Killing the Killers: The Secret War Against Terrorists

By Bill O'Reilly and Martin Dugard

Bill O'Reilly, the trailblazing journalist who can be heard on WABC Radio in New York nightly, and is the host of "The O'Reilly Update," which can be heard on 225 radio stations, and the "No Spin News" every evening on BillOReilly.com, has added another ledger to his acclaimed Killing series, which now comprises 11 books.

Killing the Killers is a deeply-detailed work on the United States' intense global war and manhunt against the terrorists who executed the 9/11 attacks. The terrorists in Al Qaeda and ISIS's worldwide network executed hundreds of others on American soil and around the world.

A lot of the deeply-sourced information O'Reilly and Dugard uncover creates the most suspenseful book in the Killing series to date, a riveting account on the War on Terror that has never been reported.

In this excerpt, O'Reilly and Dugard write about the raid that killed Osama bin Laden in May 2011: "'Mr. President, an aide tells Barack Obama, 'this is going to take a while. You might not want to sit here and watch the whole thing unfold.'

President Obama is in the basement of the White House's West Wing, in the intelligence command post known as the Situation Room. The time is shortly before 4:00 p.m. A large television screen airs a live feed of the mission in Pakistan, transmitted from drones capable of circling as high as fifty thousand feet. The unmanned aircraft is invisible to the naked eye and is capable of remaining over the target for many hours at a time.

Operation Neptune Spear combines the efforts of the civilian CIA and military Joint Special Operations Command (JSOC). So a similar viewing is taking place in a seventh-floor conference room at Central Intelligence Agency headquarters in Langley, Virginia, watched by agency director Leon Panetta, who has dedicated almost a year to this risky venture. Panetta is in direct contact with mission commander Admiral William McRaven at the SEAL's departure base in Jalalabad.

But seeing the president depart causes others to follow him, into the office of a military adviser. The room is cramped, but that does not stop people from crowding into it, much to Obama's dismay.

Barack Obama wears a white golf shirt and blue windbreaker bearing the presidential emblem. Though knowing full well the operation would proceed tonight, he intentionally played golf earlier, to avoid a departure from his normal Saturday routine. Being president means having your every movement and word scrutinized. Obama did not want to hint toward tonight's operation in any way.

A long conference table covered with open laptops and various drinks fills the center of the small space. Vice President Joe Biden is openly nervous. He and Defense Secretary Robert Gates, who is also present, are ambivalent about the mission. Both men have been asking many questions about its viability, still remembering the 1980 American debacle in the Iranian desert, when eight US servicemen were killed and six aircraft destroyed after a botched effort to rescue American hostages. That incident damaged the presidency of Jimmy Carter beyond repair. There was also Somalia, in 1993, where a Black Hawk helicopter was shot down,resulting in the deaths of eighteen Americans. That incident still is vividly remembered by the public because of a bestselling book and a subsequent Hollywood movie.

Failure tonight would be a disaster far worse than Iran or Somalia. And President Obama would take much of the heat.

Wearing a brown blazer, Secretary of State Hillary Clinton enters the room and takes a seat next to Secretary Gates. Antony Blinken, destined one day to become future president Joe Biden's secretary of state, stands in the doorway. There is very little talking. The air is thick with tension. *(Blinken served as national security adviser to Vice President Biden at the time.)

Everything is going according to plan.

Chalk One hovers over the Waziristan Palace, SEALs poised to fast-rope out the open doors. Suddenly, the eighteen-foot-high stone compound walls and hot night air contribute to a dangerous condition known as 'vortex ring state,' which prevents the helicopter rotors from producing lift. Simultaneously, the tail of the 60 bounces atop the compound wall. Lack of lift pitches the helicopter forward and down toward the ground. The tail wheel acts as a pivot point, forcing the Black Hawk to tilt sharply to the right.

The main rotors dig hard into the loose soil of a vegetable garden. Pilot and copilot strain against their seat belts, helmets and harnesses holding them fast to their cockpit seats. In the cabin behind them, the unbelted SEALs pitch forward, falling onto one another. They struggle to remain inside the helicopter. Slipping out the open doors into the spinning blocks would be a horrific way to die.

Events unfold quickly. The pilots immediately shut down the Black Hawk's two engines. SEALs, many slightly injured, scramble to exit, guns at the ready. The crash has been anything but silent, and the invaders prepare for incoming fire from the compound.

Outside, Chalk Two lands in a field, but takes off the instant the SEALs and Cairo jump out. The dog is immediately let off his leash to search for threats. He has been in combat before and knows the difference between a helpless infant and a lethal terrorist.

The original task of these operators was perimeter defense, but now they move to blow the walls and enter the compound, not knowing the fate of their comrades in the crashed helicopter.

The invading SEALs now see bin Laden's safe house for the first time. They have practiced on a life-sized version at a secret location in North Carolina. But this is the real thing.

'We opened the doors, and I looked out,' SEAL operator Robert O'Neill will remember. Seeing the high walls and knowing what must be done to complete the mission successfully, O'Neill thought, 'This is some serious Navy SEAL shit we're going to do.'"

Click here to read our review of the #1 bestselling-book, Killing the Mob, which was released in May 2021.