Book Chat: With Timothy Malcolm, On How To Take a Baseball Road Trip This Summer 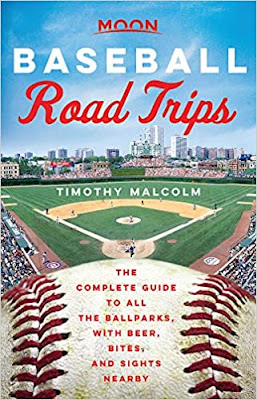 Moon Baseball Road Trips: The Complete Guide to All the Ballparks, with Beer, Bites, and Sights Nearby

Timothy Malcolm, the author of Moon Baseball Road Trips: The Complete Guide to All the Ballparks, with Beer, Bites, and Sights Nearby!, is a lifelong Phillies fan who has been featured on Mets Blog and Yahoo! Big League Stew, has written for the Hardball Times and was a senior writer and editor of Phillies Nation. He currently lives in Houston, and is also the author of Moon Drive & Hike Appalachian Trail, and writers for Backpacker, Outdoor, and Hudson Valley Magazine.

With fans back at the ballpark this season, and the summer expected to be close to normal, it's a perfect time to go on a road trip and check out some of this country's best ballparks, from classic parks like Fenway Park to Wrigley Field to newer gems like PNC Park in Pittsburgh or Camden Yards in Baltimore, or Petco Park in San Diego.

In Moon Baseball Road Trips (click here for info), Malcolm gives a variety of road trip options, such as a Boston to Washington, DC, route, a trek through the Midwest, and an excursion along the West Coast. You can find how to explore cities and discover landmarks like the Babe Ruth Museum in Baltimore, the Rock & Roll Hall of Fame in Cleveland, and Boston Common, where to eat and drink nearby. There also is information on how to see baseball landmarks like the Hall of Fame in Cooperstown, NY, and Field of Dreams in Iowa.

I recently caught up with Timothy Malcolm, and here is our conversation:

Jason Schott: As a Phillies fan, what do you like most about Citizens Bank Park, and what advice can you give New Yorkers interested in making the trip?

Timothy Malcolm: I’ve seen dozens of games at Citizens Bank Park, and I always come back to the views. The Phillies made sure that every seat faces home plate, and there’s standing room with shelves for food and drink all throughout the concourses. It means no matter where you go, you can always check out the game as it’s happening.

One thing I love to do is buy an SRO or cheap-seats ticket and simply walk around the park to find a place to post up. I’ve spent many games standing in the outfield midway called Ashburn Alley, just above the visiting team’s bullpen to listen to fans heckle pitchers and watch the game from essentially the center field camera. I can turn, take a couple steps, and grab a beer and some crab fries. Perfect.

For New Yorkers, I suggest not coming. Just kidding! Honestly, being good natured and letting any playful vitriol roll off is the way to go, and I say that for any situation where rivals might meet. To best enjoy Citizens Bank Park, consider arriving early enough to tailgate along with fans. The Jetro lot adjacent to Lot N is pretty notorious. If you want some grub, Chickie’s & Pete’s crabfries are the way to go; don’t fill up, because after the game, reserve time to get a cheesesteak or roast pork sandwich outside the ballpark. Tony Luke’s is always a good choice, but if it’s your first time, head to 9th and Passyunk and take in the originals: For me, Pat’s is the pick. Wiz wit.

JS: What are your favorite parks? Favorite classic one? Newer one (1990 on)?

TM: I personally love Fenway Park, and that goes back to my childhood. My dad owned a Fenway t-shirt that I loved looking at, and when I was a teenager I saw my first Sox game there. Then I attended Boston University and got to visit the park a bunch, including during its 2004 championship season. It’s the Green Monster, Pesky’s Pole, the snugness of the seating area, the fact that while much of the park has changed in 100 years, it remains cozy, and even the early-season games can feel intense.

Of the newer parks, I really enjoy Oracle Park in San Francisco. The main drawback there is the cost of, well … everything, but it’s placement is incredible. That view of McCovey Cove! Walking along the concourse in right field is pretty special, and hey, I was able to find Russian River Pliny the Elder on tap here.

I’ll also shout out an unlikely candidate, the artist formerly known as Marlins Park, now loanDepot park. Terrible name, but I like its neo-modern architecture with the huge glass windows and colorful artwork sprinkled about. Plus it has a solid food selection and lots of space to stretch out and see the game … though maybe some of that is due to the typical product on the field. Nonetheless, it’s an underrated experience.

JS: How much do you think people will appreciate such a deeply researched and comprehensive physical book in this digital age? It’s one you can spend hours with.

TM: First, thanks for that. And yeah, we all want immediacy and accessibility when we’re traveling, so digital information is hard to beat. But Baseball Road Trips is a product not simply of weeks or months of research, but of my lifelong love of ballparks, cities, and experiencing America. The information here—and there’s a ton of it—is complemented by what I hope is insightful and expert opinion, plus an enormous amount of personal passion. I can vouch for that part. I hope people who want to feel assured in their travels, and also want to feel a connection to the shared experience of watching live baseball, will appreciate the book pretty highly.

Plus, there’s nothing like having a book at your side when on a road trip. I’m the kind of person who keeps his road atlas in the passenger seat—people like that are going to want this book.

JS: What attractions do you like best in New York? Favorite parts of Yankee Stadium and Citi Field? What could each park improve?

TM: I lived in the city for a hot minute and spent a decade in the area, so my favorite thing to do in New York is explore neighborhoods. Give me a day in Astoria so I can visit SingleCut, Bohemian Hall, and Astoria Bier & Cheese, and sure, throw in some time down in Astoria Park to just look at the Triborough.

But for first-time tourists, I’m all about the new Whitney and, naturally, MoMA. Plus, I’ll always recommend that people do the High Line, though maybe on a weekday when it’s a little less busy.

My favorite thing about Yankee Stadium is its accessibility. I’d rather not drive to a ballgame, so having the 4, B and D close by is pretty great. And when I lived in Tarrytown, how awesome it was to walk down to the train station and take Metro North right to the Yankee Stadium station.

That said, the cost of going to a Yankee game is pretty absurd. I’m glad the bleacher seats can be more affordable, but otherwise it can really add up. Plus, I’d love to see a bigger and better craft beer selection. New York has some killer independent breweries, so there’s no excuse not to bring more of them into Yankee Stadium.

I used to be sour on Citi Field, but I’ve grown to love the place mostly on the back of its stellar food selection and its many standing-room areas. Plus, I was a regular customer of Empire State Brews, the one place to get some of the cooler draws at the park (Mikkeller, Newburgh). That said, I was sad to learn that Mikkellerleft Citi Field in late 2020.

My biggest hang up with Citi Field has always been my biggest hang up: It’s aesthetically confusing. Giant scoreboards and an insane number of advertisements, a crisis of identity—though that has improved over the years—but most of all, a sense that it doesn’t know whether it wants to be retro-classic, retro-modern, or contemporary like Angel Stadium. I’ve come to the conclusion that maybe that’s the point: Citi Field is the park for every New Yorker, so it is a little of everything itself. I’m fine with it now!

JS: In cities with two teams (New York, LA, Chicago), do you have a clear preference among stadiums there? Does one of them surprise people? For example, I prefer Angel Stadium to Dodger Stadium, which raises eyebrows

TM: For the most part, I do prefer one park over the other in two-team locations. I’m not sure I have any hot takes in this area, but I’ll at least say, in Chicago, Wrigley Field didn’t wow me and Guaranteed Rate Field has a lot more going for it than people may expect. For example, arguably the best beer selection in baseball thanks to the Craft Kave. That place has a whole bunch of hard-to-score Chicago-area beers. It’s glorious.

As for Wrigley, I like it, but once I got my fill of seeing the outfield ivy and center field scoreboard, I saw a park with a ton of bells and whistles that detract a bit from the nostalgia, and in a way that’s much more forceful than at Fenway. One way to look at it is Wrigley shows the evolution of the game—it’s both a quaint, happy little park and a bloated place with a sparkling-new dining and shopping “experience,” pricy rooftop seats, and plenty of advertisements. You take the good with the shiny. That said, Wrigleyville is great, and once you’re ready to get back to the bars, it’s a fun pre- and post-game hang.

JS: Which stadium surprised you good or bad? Was just what you expected or exceeded them?

TM: RingCentral Coliseum in Oakland. And good. Yes, it’s regularly rated as one of the worst ballparks in the majors. Yes, it’s a lot of concrete and walking, and Mount Davis out in center field is absolutely a monstrosity. But there’s a food truck and beer garden area called Championship Plaza, a fan hangout with a big bar called the Treehouse, and some good local craft beer at the Shibe Park Tavern. There’s also an onsite fruit and vegetable garden!

Plus, the A’s have strong support from younger fans, and you’ll hear a nightly frenzy out in the right field bleachers. I fully enjoyed hanging out at RingCentral.

JS: If people want to attempt their own cross country trip, what path would you recommend? Especially for my readers here in New York.

TM: Some years ago I drove from the New York area to Philadelphia to start an epic trip. I scoured the major league schedule to find a Friday night in Philly, a Saturday night in Pittsburgh, and a Sunday afternoon in Cleveland. If you can do that, try to extend it with stops in Detroit, Chicago, and Milwaukee. Or you can do Detroit, Chicago, and down to St. Louis and Kansas City. From there, try to hit Denver, then make a final climb to the Bay Area.

That may be a tough trip to pull off, but you can absolutely take a week off of work and get to Chicago and back, throwing in an additional three to five games for good measure.

Or, if you don’t want to rush too much over a week, go to Pittsburgh and Chicago (I’d recommend Wrigley over Guaranteed Rate if it’s your first time), before turning around and seeing either Cleveland or Philly on the way back.