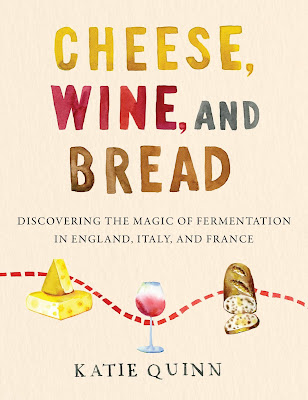 Cheese, Wine, and Bread: Discovering the Magic of Fermentation in England, Italy, and France

Katie Quinn is a video creator, podcast host, and cookbook author who thinks there is a story to be found everywhere and that food connects people. Her YouTube channel, QKatie, has 38,600 subscribers and garnered over five million views. Her podcast title, which is also her personal slogan, is Keep It Quirky, because she thinks life, in the kitchen and out of it, is more enjoyable if you don't take yourself too seriously.

Katie, who has appeared on NBC's "Today" show and on Food Network's "Chopped" and "Beat Bobby Flay," always considered herself a foodie, but a serious accident that resulted in a tragic brain injury caused her to look at food, as well as her entire life, in a different way. As she consumed food to heal, she became more curious about food itself. She wanted to learn more about the role food plays in our identity, our interactions, and our traditions.

When Katie recovered, she spent months as an apprentice with some of Europe's most acclaimed experts to study the art and science of the process.

In the beautifully produced cookbook, Cheese, Wine, and Bread, Quinn looks at how each product is made, from harvest through fermentation, which is the common link of "the trio of life's essence."

It is an artisanal adventure, travelogue, and cookbook, with Katie sharing her stories and the science of these foods to the table, explains the process of each craft, and introduces readers to the people behind them. Some of her adventures include:

In England, Katie becomes a cheesemonger at Neal's Yard Dairy, London's preeminent cheese shop, and it starts a journey in which she goes from a goat farm in rural Somerset to a nationwide search for innovating dairy gurus. Along the way, she discovers the role of women in cheesemaking, shares a recipe for Cheddar Brownies, and contrasts British and continental cheese.

The next stop is Italy, where Katie offers an inside look at Italian winemaking with the Comellis at their family-owned vineyard in Northeast Italy. Making her way around Italy, she witnesses the diversity of vintners, from small-scale vineyards to large-scale producers and explores the industry's new frontier, natural wine.

In France, Katie meets the reigning queen of bread, Apollonia Poilane of Paris' famed Poilane Bakery, apprentices at boulangeries in Paris learning the ins and outs of sourdough, and travels the country to uncover the history of grains and understand the present and future of French bread and global bread culture.