Books: "Clubbie," By Greg Larson, On Life In The Minors 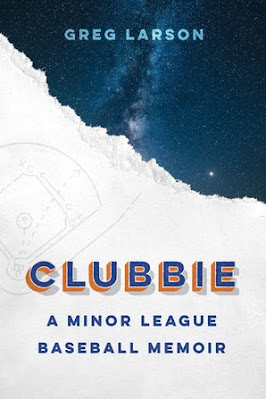 Greg Larson is an author, editor, and stand-up comedian who spent two years as the clubhouse attendant for the Aberdeen IronBirds, an affiliate of the Baltimore Orioles owned by Cal Ripken, Jr. Brooklyn Cyclones fans will know this team from their time playing them in the New York-Penn League.

Larson was a starry-eyed fan when he dove into professional baseball, thinking he entered familiar territory when he became the IronBirds clubhouse attendant, but he couldn't have been more wrong.

It didn't take long for him to see the rituals in the Minors included fights between players, teammates quitting in the middle of games, doomed relationships, and a negligent parent organization.

Fresh out of college when he got the job, Larson held a secret wish of wanting to become a player himself, despite the team's struggles and his own lack of talent. Instead, Larson became a scheming clubbie. He moved into the clubhouse equipment closet, which was his headquarters to make deals involving memorabilia, booze, and a bunch of cash. By the second season in Aberdeen, Larson transformed into a deceptive, dip-spitting veteran, enmeshed into a system that exploited players he considered friends.

The gravitational pull of baseball was so strong for Larson that he kept chasing his dream, at risk of losing his girlfriend, his future, and ultimately, his love of baseball - which changed when the IronBirds incredibly made a run for a championship.

Clubbie features a lot of familiar names, such as then-Orioles manager Buck Showalter and second baseman Brian Roberts, as well as Trey Mancini, who began his ascent to the Majors. It is a book that fans who appreciate the minor leagues, and relishes the chance to see the inner workings of team.

In this excerpt, Larson writes of when Aberdeen in a stretch when they started to play well: "We swept the division-leading Hudson Valley Renegades on the three-game road trip to start July. Powered by some staunch pitching, we gave up only four runs in three games. The offense provided some key hits as well. (Sam) Kimmel brought in the first game's lone run with a double in the top of the thirteenth inning, and slugging first baseman Trey Mancini went five for five on July 3. The guys came home with a 9-8 record, just one game out of first place in the McNamara Division.

What was the missing thing?

'You missed some good baseball games,' Trek said when they got back from a road trip.

'Oh, and we got B.G. coming sometime in the next couple weeks, so just a heads up.'

I nodded. 'You think he'll keep the core of this team together? So, you know, we can maybe do something here.'

We won our Fourth of July game. We won again on July 5, beating the Brooklyn Cyclones with a walk-off error in the eleventh. Mancini, the first baseman from Notre Dame with a goofy smile, had raised his average to a team-best .361. Kimmel was hitting .340 as a DH and part-time outfielder. Sebastian Vader, the wiry right-hander, had eased into the ace's role with a 2.96 ERA. Late-inning relief men Jimmy Yacabonis and Donnie Hart had yet to surrender any runs between the two of them. (Hell, even third-string catcher Jack Graham, B.G.'s nephew, was getting in on the fun. He started one game as the DH, batting ninth in the order, and went 0-4. But, on the bright side, he only struck out once, and his .000 batting average didn't even drop.)

The walk-off on July 5 brought our winning streak to five in a row.

The clubhouse had shifted. When I'd watch the closed-loop video feed of the game on the clubhouse television, players always filtered in and out of the bullpen - often sitting down for long stretches to enjoy the air-conditioning. They used to be idle, almost indifferent toward the game or, at worst, hoping for it to shoot by quickly. Now those small batches of clubhouse delinquents cheered at the television whenever we scored.

Our routines and rituals shifted, too. Jersey selection, which was customarily left to the whims of the starting pitcher, had gone from a solitary choice to an entire team's foregone conclusion: we always wore the cobalt blue alternates with 'Aberdeen' written in silver cursive across the chest, underscored by the flair of a waving pennant. They were my favorite jerseys: not only because they looked good but also because they were much easier to clean than the usual home whites. For good luck we wore those same blue alternates every game of our growing win streak. And after each victory we played Miley Cyrus's 'We Can't Stop' in the clubhouse:

Can't you see it's we who own the night?

Hell, even the food was better. Our postgame meals were now cooked fresh, specifically for us every game - no more leftovers (I had to pay two bucks a head now, unlike the previous year, but it was a small price for guaranteed food.) We ate hearty meals of grilled chicken and veggies or pastas with meat sauce, and sometimes a front office person brought down a tray of soft pretzels topped with crabmeat and cheese for the players.

I even shagged fly balls during batting practice.

When the team came back from one road trip in early July, they didn't arrive until 3:00 a.m., so I didn't have their uniforms washed until 6:00 a.m. But since the bus got in so late, they wouldn't start stretching and doing early work in the cages until late afternoon, which would allow me plenty of time to get things done without being bothered. I slapped on some rubber gloves and set up my meal prep station in my bedroom: a fold-up table topped with two white towels (which I kept separate from the regular shower towels that were in constant contact with guys' ding-dongs). Next to the table was a makeshift garbage can I made by lining an old baseball box with a black garbage bag. I got the watermelon and pineapple cut and covered in saran wrap, tossed it in the fridge, and did the same with lemon juice to keep them from browning. I cracked open a dozen or so canned chicken containers, tediously twisting my dollar-store can opener until aching pain shot through my carpal tunnel. I mixed the chicken with a bit of mayo, salt, pepper, and Old Bay seasoning. I had the whole pregame spread ready by the time batting practice started.

Only hours removed from their late-night bus ride, the guys ambled out of the clubhouse for BP like college students taking the walk of shame, all in their dry-fit black shirts, high black socks, and topped with their blue BP caps. Unlike the previous year, I actually hooked myself up with player gear, so I felt like part of the team. The final clicks of cleats filtered out of the clubhouse, with the last guy carrying his fielding glove on his bat through the wrist strap, the same way we've all done it since we were kids - the same way players have done it forever."