Books: "Hype" By Gabrielle Bluestone, On How People Fall For Con Artists 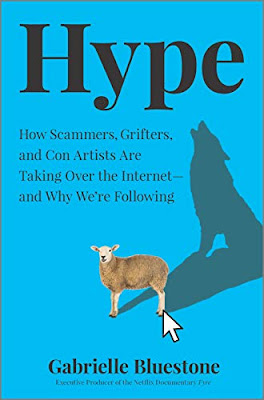 Hype: How Scammers, Grifters, and Con Artists are Taking Over the Internet - and Why We're Following

Gabreille Bluestone is the Emmy-nominated producer of the Netflix documentary Fyre and the associate producer of Different Flowers, winner of the 2017 Kansas City FilmFest Festival Prize. She is also a journalist and licensed attorney from New York, whose writing has appeared in outlets including the New York Times, Washington Post, and Esquire.

The new book Hype is somewhat of an extension of the work Bluestone did on the Fyre documentary, as she examines all the grifts and cons that people continue to fall for, including, yes, what went into the fiasco of the Fyre Festival, when a charismatic entrepreneur, Billy McFarland, sells thousands of tickets to a festival that never happened.

Bluestone delves into the irresistible hype that fuels our social media ecosystem, whether it's from the trusted influencers that sold Fyre or the consumer reviews that sold Juicero. She also conducted exclusive interviews with experts and con artists themselves, including fake heiresses and influencers, scheming "money men" like Elon Musk, WeWork, Theranos, brands like Supreme, social media-enabled online marketing, and the tech industry.

Other trends that are looked into include Robinhood, the scamming hedge-fund app that halted trading to bail out their billionaire investors; WeWoreWhat, whose founder Danielle Bernstein has been allegedly stealing other people's designs; the Love Islanders, who can't stop getting busted on Covid vaccinations; Anna Delvey, the fake heiress who has recently been released from prison and subject to a soon-to-be Netflix docuseries; and former staff members of Mike Bloomberg's 2020 presidetial campaign talk about their interesting (to put it mildly) way they tried to get the former New York City Mayor to go "viral."

In this excerpt, Bluestone writes about the planning that went into the Fyre Festival: "'We're selling a pipe dream to your average losers," McFarland announced suddenly late one December evening. It was in fact, a perfect summing up of his life's work, but McFarland's mind wasn't on a strategy that particular winter day in 2016. In fact, it as a wonder that he was even urpight at all. Earlier in the day, he'd passed out on a Bahamian beach, fully clothed, with a half-full bottle of beer still clasped in one hand in the middle of a work event. Not that he was alone in that exhaustion - all the boys (everyone on the Fyre executive team was male, and all but one, the rapper JaRule, were white) had been celebrating.

Also present that night were ten of IMG's top-earning models, an elite group that included Hailey Bieber (nee Baldwin), Bella Hadid, Shanina Shaik, Chanel Iman, Elsa Hosk, and Alessandra Ambrosio. It wasn't exactly clear if they were still on the clock or not after a full-day photoshoot, but there were still cameras running all around, muddying the otherwise crystal clear waters around them. By that point in the shoot, the Fyre team was already $120,000 in the hole with MATTE Projects, who had been shooting footage for a concert documentary they planned to pitch to YouTube Red, and spending hundreds of thousands a month on the regular use of a Dassault Falcon 7X jet, a $20,000-a-week Dolce Vita villa on Staniel Cay, and nightly parties at the nearby MacDuff's Restaurant and Grille.

Grant Margolin, now Fyre's head of marketing, had officially joined the team from his former role at Magnises in early November 2016. Although he had never attended a music festival before, he had still managed to negotiate a $175,000 salary with added perks that included a driver and access to the Fyre American Express card. The self-priduced documentary had been his idea, and he'd even thrown together an incredibly detailed, nonsensical pitch deck for how he thought it might look.

'Welcome to Fyre: a remote island festival packed with 10,000 guests primed for an exotic adventure. The catch? It's about to be planned, organized, and pulled off by a wild assortment of characters that have little experience in throwing music festivals, but a glowing track record in creating successful business,' Margolin's pitch read. 'WHO? the Fyre core ensemble working to build the festival from NYC / LA / Fyre Cay. WHEN? June 2017 WHY? Why the fuck not? WHAT? A five-part documentary series that corresponds to a different location for each iteration of the festival and it's [sic] corresponding locations around the world i.e. EARTH, WATER, FIRE, AIR.'

McFarland, on the other hand, was far more focused on the models than any production - and focused in particular on the twnety-six-year-old model Chanel Iman. He'd been courting her for months with offers of vacations on private islands, trips aboard chartered jets, and catered Nets game suites, much of it arranged by Margolin at McFarland's request and paid for as a Fyre business expense.

So that was the scene in which McFarland frankly expressed his intentions for the festival - not as an honest admission, but as a way to pressure Iman into getting in the water with him despite her obvious lack of interest. Now the Fyre Festival CEP was implying to the group that a shot of them jumping into the dark ocean was compulsory under their contracts, for which he'd paid dearly...

Under the soothing trap beats of DRAM's 'Broccoli,' tensions rose sharply that night as Fyre's chief talent officer, Ian Browne, put up a rare challenge to McFarland's demands. What good would an unlit video of McFarland running into a dark ocean with Atkins (JaRule's real name is Jeffrey Atkins) and a squad of unwilling models do for the festival? he asked incredulously. But McFarland and Atkins were adamant: they were going swimming, and the girls were coming with them.

Finally the group arrived at a compromise: the girls would dance, as it turned out, rather joylessly, while ankle-deep in the dark surf. The moment was captured by MATTE's cameras, all the way down to the smile that slipped of Iman's face, settling into a grimace.

But the Fyre boys were on an unstoppable high that night, essentially living out their fantasies under the auspices of a business expense. Never mind the convoluted arrangement, which saw the bulk of the company's investments to date poured into a single advertisement for a music festival - itself justified only as an advertisement for Fyre's actual product, an app called Fyre Media. As Fyre Media employees, first and foremost, the guys had already spent months building out the app, a talent-booking platform on which even the so-called average losers could supposedly buy time with their favorite celebrities. Now they were on a deserted island with the hottest models in the world - and they were getting paid to do it.

They didn't know it then, but it was the beginning of the end."