Books: "A Raid on the Red Sea" on How Israel Foiled An Iranian-Palestinian Plot 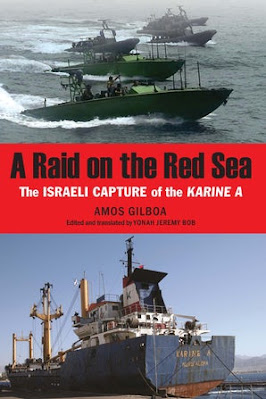 A Raid on the Red Sea: The Israeli Capture of the Karine A

By Amos Gilboa; edited and translated by Yonah Jeremy Bob

Brig. Gen. Amos Gilboa (Res.) is a former head of the Analysis and Production Division of Israeli Defense Forces Intelligence and military attache in Washington. For over a decade, he was a special advisor for methodology in military intelligence and teacher of various intelligence and technology-related courses at the Interdisciplinary Center Herzliya and the Technion University.

Gilboa is the author of several books, including Israel's Silent Defender: An Inside Look at Sixty Years of Israeli Intelligence, and Mr. Intelligence: Arale the Biography of General Aharon Yariv.

Yonah Jeremy Bob, who edited and translated A Raid on the Red Sea, is an intelligence, terrorism, and legal analyst as well as a literary editor for the Jerusalem Post. He is the author of Justice in the West Bank? The Israeli-Palestinian Conflict Goes to Court.

In A Raid on the Red Sea, Gilboa writes about the most successful Israeli intelligence operation since the legendary Entebbe hostage rescue. This first-person account examines illegal gun-running in the Middle East, and gives harrowing details of the secret close-working relations between Israeli and American intelligence in the seizure of the Karine A ship.

At 0400 hours on January 3, 2002, two fast boats of Israel's naval commando unit closed in on the stern of the Palestinian Authority's Karine A. The Iranian Islamic Revolutionary Guard Corps had clandestinely loaded its cargo: fifty-six tons of high-grade, long-range weapons destined for the Gaza Strip. The Israelis planned to seize it, but it went awry when they found nothing but a confused group of Egyptians, Jordanians, and Palestinians. Had they boarded the wrong ship, and was there going to be an international incident disgracing Israel?

The hero of this dramatic story is a woman, a low-level female intelligence analyst who was the first to grasp the grave danger that the Karine A posed. She analyzed tons of disinformation, kept on the scent of the ship, and tracked it from Egypt to Sudan to Dubai.

The weapons were loaded onto the ship near the coast of Iran in the Persian Gulf and were headed to the Gaza Strip to help fulfill the goal of Iran, Hezbollah, and the Palestinian Authority of escalating a campaign of terrorism, which was known as the Second Intifada, against Israel.

It was the first time that Israel captured a large Palestinian cargo ship that was smuggling weapons. Another first was that a military force executed a capture of a moving ship with synchronized forces that climbed onto the ship clandestinely from the sea, and slid from helicopters down special fast ropes to the deck.

The operation was completed due to the joint efforts of Israeli and United States naval intelligence - Mossad and the CIA - that the ship was stopped and calamity averted.

The seizure of the ship led to a fateful reorientation of U.S. policy regarding the Middle East with consequences to this day, from the Israeli-Palestinian conflict to the 2020 assassination of Islamic Revolutionary Guard Corps Quds Force chief Qasem Soleimani.

In this excerpt, Gilboa writes of the aftermath: "During hs visit on Friday, January 4, Bush envoy General (Anthony) Zinni visited Prime Minister (Ariel) Sharon at his farm for a sumptuous breakfast. Foreign Minister Shimon Peres and Defense Minister (Binyamin) Ben-Eliezer were also in attendance. Upon Zinni's arrival in Israel the evening before, he had met with the Israeil intelligence high command. This morning's gathering would now he his first diplomatic meeting during his four-day trip to meet with the Israelis and the Palestinians. His next stop would be with (Yasir) Arafat.

'You call tell Arafat not to worry about his Karine A ship,' saidsharon to Zinni mischievously. 'We're bringing it to Eliat right now. By evening, it will have docked, with all of its weapons.'

Most of the conversation that morning dealt with the Karine A, the PA, Arafat, and terrorism. General Zinni was not the firsty American to hear about the capture of the Karine A. A little before their meeting, Sharon had called Secretary of State Colin Powell to update him.

That afternoon, (head of naval intelligence, Rear Adm. Yechezkel "Hezi") Meshita invited (US Naval Intelligence attache in Israel and key liaison during the Karine A affair) Stephanie to his office. After she arrived, he said, 'Can you connect me with U.S. Navy Intelligence chief Adm. Richard Porterfield?'

It was 6:30 a.m. eastern standard time in the United States. Medhita assumed that the prime minister had updated Zinni that morning about the operations, but he knew it was important for him to call Porterfield directly. 'So get him on the line for me,' he said.

When Stephanie had Porterfield on the phone, Meshita told him about the operation. He also told him that in less than an hour, the operation would be publicly announced and thanked him.

On Saturday, January 5, the new IDI director Farkash updated Sharon that the intelligence clearly showed that Iranian supreme leader Ayatollah Ali Khamenei knew that Iranian weapons were being sent on the ship. Farkash emphasized that this information was hard, and not speculative, intelligence. Many prime ministers were somewhat intimidated by intelligence chiefs and would just accept these kinds of reports. Sharon was different. He asked why Farkash was so sure and what the basis of the intelligence conclusion about Khamenei was.

Hesitating a bit, Farkash said it was mostly based on Unit 8200's interceptions of electronic communications as well as on data from a highly placed Mossad double agent with whom Sharon was familiar (but whose identity remains classified to this day).

Sharon nodded his head and understood.

The signs of the Iranians' handiwork regarding the weapons and the intelligence basis were also strong evidence of two points: first, the personal involvement of Arafat and his top aides in the PA, including Fuad Shubaki; and second, the strategic and operational connection between Iran and the PA, both directly and indirectly, via Hezbollah-Iran's top operative Imad Mughniyeh. The connection started in April 2000 with a series of Palestinian-Iranian meetings in Russia, Oman, and the UAE - all of which took place with Arafat's specific approval. Not only did the Iranians prepare the floating containers for the weapons but also the weapons themselves were loaded onto the Karina A at a small island near Iran and not in Dubai, which was naval intelligence's theory until the ship was captured."