With the baseball season underway, it's a great time to read up on the history of America's Pastime, and a trio of new books step up to the plate: 1962: Baseball and America in the Time of JFK, by David Krell on one of the most historic seasons in baseball's history, which included the debut of the New York Mets; The Pride of Minnesota: The Twins in the Turbulent 1960s, by Thom Henninger; and Lights Camera Fastball: How the Hollywood Stars Changed Baseball, by Dan Taylor, on how the Pacific Coast League team transformed the game in the Golden Age of movies. 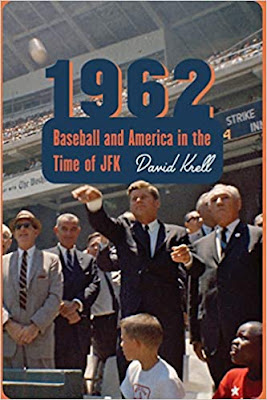 1962: Baseball and America in the Time of JFK

When you mention 1962 to a baseball fan in New York, the first thought goes to that it was the first year of the New York Mets, who marked the return of National League baseball to the city after the departure of the Brooklyn Dodgers and New York Giants. They were led by longtime Yankees Manager Casey Stengel and went on to lose a record 120 games. "Can't anybody here play this game?" is one of many famous quips Stengel said about the hapless team. There was another National League expansion club that season in addition to the Mets, the season saw the debut of The Houston Colt .45s, who later rebranded as the Astros.

New York fans also were overjoyed that the Yankees won their 20th World Series championship, beating the San Francisco Giants, in their first appearance since leaving the Polo Grounds, in seven games.

There also was the opening of Dodger Stadium, the state-of-the-art ballpark in Chavez Ravine, and it was another classic season for the Dodgers. Sandy Koufax pitched the first of his four career no-hitters, Maury Wills set a record for stolen bases in a season, and Don Drysdale won 25 games.

There also was a lot of news beyond the diamond that year, which Krell deftly weaves into the story to create the full picture of American in the summer of '62. President John F. Kennedy stared down the Russians during the Cuban Missile Crisis, First Lady Jackie Kennedy revealed the secrets of the White House in a television special, Mary Early became the first Black graduate of the University of Georgia, and John Glenn became the first astronaut to orbit Earth.

In this excerpt, Krell writes of the Mets and their dynamic owner: "With the joy of a child on Christmas morning, a woman, rather matronly in appearance but impeccably dressed, with a fashionable hat adorning her grayish hair and framing a cherubic face, approached Box 4A, Section 16, at the Polo Grounds during the 1962 baseball season. Once a minority stockholder in the New York Giants baseball club, she mourned when the great Giants-Didgers rivalry left New York City behind and shifted three thousand miles westward.

For Joan Whitney Payson and tens of thousands of other baseball fans, 1962 was a clean slate. An heiress in the Whitney family, the fifty-nine-year-old Payson had the comfort of wealth and the status of society; her family was in the New York 400, an indicator of the city's high-society folks, those who make donations that result in hospital wings, arts endowments, and humanitarian of the year awards. But it was not merely an investment to yield profit, dividends, and financial security. It was a passion. She drove a Bentley with the vanity plate 'MET 1' and a Lark with the license plate 'MET 2' - symbols of adoration, not proclamations of grandeur, ego, or prosperity...

Despite their win-loss record, the '62 Mets hold a place in fans' hearts. So what if their players were aging or failing or not yet ripe for the Majors? They revived National League baseball in a city thirsty for an alternative to the Yankees." 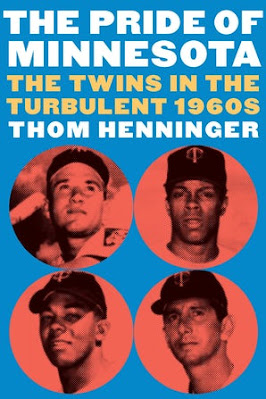 The Pride of Minnesota: The Twins in the Turbulent 1960s

In a kind of a perfect complement to 1962, Thom Henninger, the editor of Baseball Digest and the author of Tony Oliva: The Life and Times of a Minnesota Twins legend, has written The Pride of Minnesota, on how the Twins were a source of pride in the city throughout the turbulent, transformative '60s.

The Twins reached the World Series in 1965, losing in a classic seven-game series to the Dodgers, and were in pennant races the rest of the decade, led by Rod Carew and Tony Oliva. That '65 season was when it all turned, starting with Billy Martin, the legendary Yankee who was at the end of his playing career with the Twins, being hired as the third base coach, which gave them a more aggressive base-running style. Mudcat Grant was the first African-American to win 20 games in the American League, and Oliva won his second batting title.

Carew made his debut in 1967, when the Twins were in a legendary pennant race with the Boston Red Sox, whose "Impossible Dream" season carried them to the World Series. Two years later, Martin took over as manager, and Carew and Harmon Killibrew led the Twins to the American League Championship Series, where they lost to that dynastic Baltimore Orioles team (we know who beat them in the World Series).

After the season, Martin was fires in part for a now-legendary bar fight, and Bill Rigney took the Twins right back to the ALCS, but they fell to Baltimore for the second straight season.

In this excerpt, Henninger writes of the origins of the Twins: "When Calvin Griffith picked up stakes and moved the Washington Senators to Minnesota in 1961, the franchise had finished in the top half of the American League standings just four times since winning its last pennant in 1933. The Senators plunged to seventh place in '34, setting the tone for nearly three decades of uninspiring baseball.

The franchise's fortunes began to turn just prior to departing the nation's capital. Homegrown talents Harmon Killibrew and Bob Allison blossomed into premier sluggers, and Camilo Pascual and Jim Kaat became effective starters around which to build a pitching staff. In a key trade a year before the move to Minnesota, Griffith dealt power-hitter Roy Sievers, in his mid-thirties and soon to decline, to the Chicago White Sox for two promising young players, catcher Earl Battey and first baseman Don Mincher. During the inaugural season of Twins baseball in 1961, Zoilo Versalles emerged as the first of several impact rookies to join the club.

On April 11, 1960, the transplanted Washington franchise made its Twins debut at Yankee Stadium. Minnesota manager Cookie Lavagetto, who moved from Washington with the club, called on Cuban-born Pedro Ramos to start Minnesota's inaugural game. Ramos had already made quite a first impression on Twins fans. With Cuban-U.S. relations quickly deteriorating that spring, the flamboyant and outspoken Ramos livened the final days of spring training by announcing to the world that he might return to his homeland to fight Fidel Castro's revolutionary government. Days later, he settled for whipping the Yankees at the home of the reigning AL champions.

The right-hander tossed a three-hitter and quieted the New York faithful with a 6-0 shutout. He outdueled Whitey Ford - the Cy Young Award winner that year - and Allison broke up the scoreless match by drilling a Ford fastball for a seventh-inning home run, the first in Twins history. Ramos later ambushed the Yanquis with a two-run single of his own. Soon after, Ramos announced that he intended to keep his day job and took himself out of the running for war duty. 'I'm a baseball player,' he quipped, 'not a fighter.'

The Twins victory certainly didn't set the course for the Yankees' 1961 campaign. Mickey Mantle and Roger Maris flirted with Babe Ruth's home run record; Maris topped it with 61. Whitey For finished 25-4 and the Yankees won 109 games and a five-game World Series over the Cincinnati Reds. Meanwhile, the Twins went 70-90, though this was an improvement for a franchise that had averaged 93 losses a year in its final six seasons in Washington, complete with four last-place finishes." 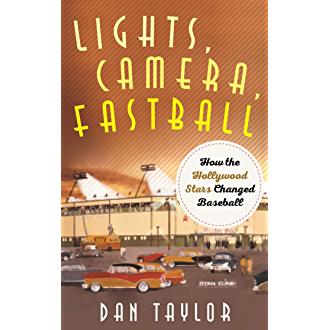 Before the Dodgers and Giants migrated west, the Pacific Coast League was the big leagues to California, and the Hollywood Stars were one of its crown jewel team, and according to Don Taylor in Lights, Camera, Fastball, the most inventive team in baseball history.

The Stars played for 20 years in the PCL, and its celebrity owners, including actor Joe E. Brown, pushed boundaries and challenged existing business norms. They were known for playing in short pants, how they instigated rule changes,employed cheerleaders and movie-star beauty queens, pioneered baseball on television, took planes instead of trains, and offered fans dining options never before seen at the ballpark.

Bob Cobb, the owner of the heralded Brown Derby restaurant and known more famously for inventing the Cobb salad, led the Stars, who played before celebrities such as Clark Gable, Jimmy Stewart, and Barbara Stanwyck at Gilmore Field.

Taylor writes of the stadium in this excerpt: "On February 13, 1939, the years of rumors and off-the-mark reports faded into history. Under a sunny sky Bob Cobb and Victor Ford Collins thrust steel spades into dirt on Earl Gilmore's land in a display of reality. Doubt was pushed aside; skepticism, dispelled. A ballpark was finally comign to Hollywood. Groundbreaking for the new park was done hastily and without fanfare. Once concluded, the motors of tractors came to life, and work began to level the ground. In most quarters the occasion drew praise, but at least one sportswriter heaped scorn on Cobb, excoriating him for failing to hire a publicist who might have turned the event into a more celebrated occasion. The serial entrepreneur answered that only the first game in the new ballpark would be worthy of such festivity and vowed that the event would indeed be one to remember...

The first six rows of seating were box seats - 320 boxes in all - which contained anywhere from four to eight seats, depending on the buyer's wishes. The Gilmore Field boxes were unlike those offered in any other ballpark in the country. Each had a back and sides for privacy, with a small counter on which to set food and eat. The boxes were modeled after those popular with wealthy and celebrity patrons at the Hollywood Park Racetrack and the Hollywood Bowl entertainment venue. Almost every box was bought by a season ticket holder: celebrities, motion picture moguls, and business leaders, in most cases. Unlike the method used at every other ballpark in both the major and minor leagues to identify box seats - a number and letter stenciled on a piece of wood - at Gilmore Field a small plaque with a gold engraved nameplate told which box belonged to Walt Disney, where George Raft was to sit, and which box was for Groucho Marx and his family. Behind the 2,554 box seats were grandstand seats. Eight thousand were originally planned, but the number was later scaled back slightly. Bleachers completed the seating structure. They extended from the end of the grandstands to each foul pole and held in the neighborhood of two thousand fans. The original plan for Gilmore Field totaled seating for 12,500. Once construction concluded, Cobb would settle for 10,000.

At Gail Patrick's urging, two ladies' lounges were constructed. Both mirrored the finest in any of the area's theaters or cinemas. They featured powder rooms with lace curtains and offered free powder and puffs, sterilized combs and brushes, sewing needles and thread, and several mirrors of both the full-length and small variety. The room was staffed two attendants to keep things well stocked and clean, and to serve the female fans. Beneath the stands was a VIP lounge, a private room that offered pregame entertainment and privacy for the Stars' celebrity fans. Cobb's idea was for a band to play in one corner while a bar offered cocktails in another. Before night games a buffet dinner was to be made available."