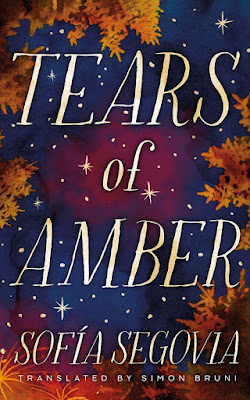 Tears of Amber: A Novel

Sofia Segovia was born in Monterrey, Mexico. She studied communications at Universidad de Monterey, thinking she would be a journalist, when her real love is fiction. A creative writing teacher, she also has been a ghostwriter and communications director for local political campaigns and has written several plays for local theater.

The Spanish edition of Segovia's bestselling The Murmur of Bees (El murmullo de las abejas) was an Audie Award winner and named Nove of the Year by iTunes. The English translation by Simon Bruni, and narrated by Xe Sands and Angelo Di Loreto, was named an Audible Top 10 of 2019 and a Voice Arts Awards winner. Segovia is also the author of Noche de huracon (Night of the Hurricane) and Huracon (Hurricane). To learn more about this remarkable writer, visit www.sofiasegovia.com.

Segovia's newest novel, one sure to warm your heart, is Tears of Amber (Peregrinos is the Spanish version), focuses on two families from different regions of Prussia who flee their villages in an exodus provided by the horrors of World War II. It is hope that carries Ilse Hahlbrock and Arno Schipper, children caught in the crosshairs of war, on an extraordinary pilgrimage in which the gift of an amber teardrop is at once a valuable form of currency and a symbol of resilience. It draws them together against insurmountable odds.

Tears of Amber is inspired by real events, and while it is a Prussian story, it is also a Mexican story, as Segovia told Publishers Weekly, "The protagonists settled in my hometown and I am a close friend of one of their daughters, born in Germany. I had never dared to ask what had been of her parents' during the war, because I knew it had to be a difficult subject. But when she told me about her mother as a little girl in a runaway carriage, holding her brother tight, I was hooked by the images. Then by the amazing, almost-impossible-to-believe coincidences that brought her father and mother together, both alive, not only in body but also in spirit, in hope. Their story lives in them and in their children just a few blocks from my home. They created an amazing, generous, loving Mexican-German family. They are German, but they break the stereotype of the movies and novels: they were not soldiers, they were little kids with hopes and dreams in Prussia when this war, abandonment and exodus happened to them. I wanted to break with the usual way we know WWII. It was a risk I took, looking out of the eyes of German folk and not from those of the usual victims. But I realized that the truth of the despicable Holocaust and the truth of children and families like those in Tears of Amber coexisted and even complement and completed each other. So I wrote it."

Simon Bruni translates literary works from Spanish, a language he acquired through total immersion while living in Alicante, Valencia, and Santander. He studied Spanish and linguistics at Queen Mary University of London and literary translation at the University of Exeter. Simon's many published translations include novels, short stories, video games, and nonfiction publications, and he is the winner of three John Dryden translation awards, for Paul Pen's short stories "Cinnamon" (2017) and "The Porcelain Boy" (2015), and in 2011, for Francisco Perez Gandul's novel Cell 211. His translations of Segovia's The Murmur of Bees and Paul Pen's The Light of the Fireflies have both become international bestsellers. To learn more about Simon, visit www.simonbruni.com.

In this excerpt, Segovia writes about the Hahlbrock family in the depths of the war, in this entry called "The Children's War" from March 25, 1941: "The war continued, and the Hahlbrooks did everything that was demanded of them; they gave everything, but they didn't understand why they had to hand over their daughters' and son's childhoods. But they remained silent, because they had no choice.

The Hahlbrock family lived in a remote corner of the country, essential due to its fertile soil but far from the Prussian capital and its new social and political tenets: Jews were the scourge of the earth; Germany would see to it they were defeated; the Reich was gaining more and more territory; they'd invaded Greece; the battle for France had been a stroll in the park; it wouldn't be long before they overcame the stupid British via aerial bombardment and total control of the seas; the Vaterland would build a greater empire than the Romans.

None of this changed the fact that the cows had to be milked when they had to be milked, that the planting and harvesting had to be done at precise times, that the lambs needed shearing every summer. Everything had to be maintained: the house, the fields, the barn, the stables, the castle. But the countryside had no time for national greatness. Crop infestations didn't care that the government demanded a bigger and bigger cut. Sieg Heil! Wanda and Hatwig yelled at the obligatory meetings and rallies. Sieg Heil! Sieg Heil! Victory was guaranteed; Germany's greatness, assured. Glorious Germany.

They hated the Party meetings. They both thought their time was better spent on the farm, leaving politics in the hands of whoever was interested. But missing meetings was considered worse than missing church. Absence was interpreted as a show of dissent, because politics was the new religion; Adolf Hitler, the new messiah. Friendly neighbors, fellow churchgoers, now wouldn't hesitate to report as traitors anyone who failed to show sufficient fervor in their Nazi saulte.

The Hahlbrocks didn't understand the paranoia, but they understood they had to live with it. So they went to the meetings; they sent their daughter to the youth group - and they did it without complaint. By now, they'd almost stopped complaining even in the privacy of their bedroom for fear that Irmgard would hear them.

And they dreamed of the day when the war would end, when everything could go back to normal; when, as the anthem they were so sick of hearing said, there would be bread but also peace. Peace among Germans, between neighbors.

The Hahlbrocks worked to this end; they contributed in order to reach a better time, a better Germany. So they put up with the chants that Ilse now repeated at her sister's instruction.

'Learn it properly then when you're ten and you can go, you'll be the best.'

She taught her to march just as she'd been taught. She taught her the exercises. She told her terrifying modern fables, hectoring Ilse until she listened to every word.

'Ilse, you must pay attention and learn what to do if you come up against one of those yellow-starred snakes. Come on. Sing the anthem again. And don't mess it up this time.'

'Later. It's time for dinner and we don't sing at the table,' said Wanda.

She was grateful for any excuse to avoid listening to the song they were using to turn their daughters into fanatics.

'We don't even sing church songs at the table; you know that, Irmgard.'"