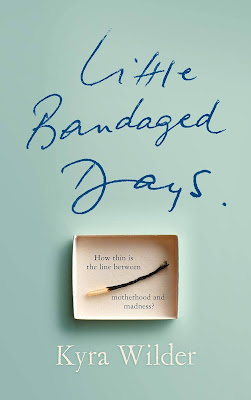 Kyra Wilder is a debut novelist who received her BA and MA in English literature at San Francisco State University. She then worked under Michael Tusk at the Michelin-starred Quince, where she made pasta, and she continued to work in restaurants in New York before moving to Switzerland with her family, where she is currently.

Little Bandaged Days is an emotionally charged debut thriller about motherhood, madness, and the myth of the perfect life. A young mother, Erika, moves to Geneva with her husband and two young children.

They settle into a beautiful new rented apartment filled with gorgeous furniture and a charming world outside her door that is waiting to be explored. However, despite the idyllic setting, she finds herself totally isolated.

Erika has never felt more alone, has trouble sleeping, and her thoughts are confusing, where she's not even sure if they're her own. The demands of two children under two are catching up with her, and once the children are finally asleep, there are just too many hours to fill until morning.

Through it all, Erika can't shake the feeling that something bad is about to happen, and as she descends into madness, the biggest question is what she will be driven to do.

Beautifully written, Little Bandaged Days is unpredictable, compelling, and brutally honest. The painfully claustrophobic story tells the harsh conditions of motherhood and this mother's own identity.

In this excerpt, Wilder writes of what Erika's life, with her husband M and kids E and B, is like after they have settled in: "The weather had been wonderful in June. Now though it was July and we were in the apartment and summer was dragging us through its belly. We could have been the pulpy carcasses of goats swallowed whole by a crocodile. It was that hot inside the apartment. M was always gone. I found his undershirts on the floor ad washed them, put his socks away and left dinners for him on the counter if I thought he might be back after we went to sleep. If I was finding everything to be harder than I thought I might find it, well, I told myself, M was working hard too. I knew he was working so hard and everything would be easier for him, and more equal really, if everything at home was perfect and dinner was cooked well and left ready for him.

Things were going well for M's company. Money was putting down roots and growing and growing inside all of the company's accounts. Fields of fresh green data promised happiness to come. Everything was budding, bright and young and green. There were a lot of people to meet and shake hands with. M was travelling and shaking hands and every time he shook someone's hand he became more like the person he was becoming. The person in a room who could be taken at a glance to be someone in charge of things, of people, of money.

London. Berlin. Rome. I couldn't keep up really. I had trouble remembering when he was gone, and when he wasn't gone but was at the office. Really, I had trouble telling the difference. He dropped packets of candy from where he'd been on the kitchen counter for E. That's how we could tell he'd been away. How we could tell that he was back. The candy packets in the kitchen, with all their beautiful colours and amazing names. Jolly Jellies! Blumen-Zauber. Bombottini. We ate them all, E and me, all the packets. We ate every last thing he brought home and licked the sugar, le sucre, lo zucchero, den Zucker from our fingers, de nos doigts, dalle nostre dita, von unseren Fingren, like baby monsters.

It wasn't as if we weren't very busy, E and B and me. How could we not have been? There was so much to do. I signed up for a fidelity card at the dry cleaners down the street and bought a special zip-up bag with a built-in hanger for transporting M's suits back and forth. I deliberated as to the various ways that I should request his jackets. pants and shirts be handled, wrote carefully down sentences that could be repeated to the brisk lady at the shop. But of course I stumbled instantly in front of her when I tried to read the script, tripping up over all the intricate sounds required to say, I would like. And we would end with me only silently nodding, silently thank-you smiling, and he sniffing and handing me a receipt.

M was always away one way or another. He was always gone. The apartment door was shut behind him each morning when we woke and that was good and fine really. He was getting on with things and we were left inside to our own devices. How wonderful I told E, how wonderfully lucky we are to be free like this, free to do exactly as we please.

We slept all the time, E and me and B, and sometimes we didn't sleep at all. Time was inconvenient, unpredictable. Sometimes it rushed me along and sometimes the minutes wrapped themselves around me, pressing, expecting to be entertained like children, needing something, needing to be fed, as if the hours were animals opening their mouths, the endless parade of minutes lodging like tiny bones in a thousand soft throats. The light never changed. I studied the coins M left on the bedside table like artefacts, his water glasses, the wet towels he left on the floor. I slipped my hand inside all of his pockets before I took his clothes to the cleaners. Perhaps he thought of me too, perhaps we were each of us ghosts to each other. Boo, I could whisper maybe in his ear while he slept. Here I am."