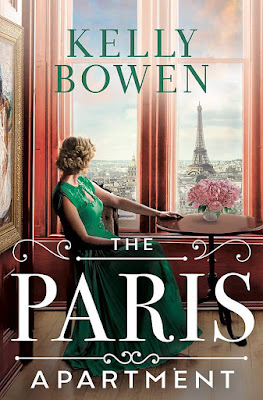 Kelly Bowen is an award-winning author of ten novels and five novellas that have been published worldwide and translated into five languages, and she has a passion for telling stories about remarkable women doing extraordinary things that are often overlooked in history. The Manitoba, Canada, native, worked as a research scientist before realizing her dream to become an author of historical fiction. Her writing career began with an entry into a Romance Writers of America chapter writing contest, which earned her a literary agent and subsequently a publishing deal.

The Paris Apartment is about a young woman who inherits a Parisian apartment untouched since World War II and discovers clues about her grandmother's secret life. It was a past that had bravery and valor that was not revealed until now.

This compelling story is told in two seemlessly interwoven timelines, first in contemporary Paris as Aurelia Leclaire discovers that her grandmother's apartment contains a host of priceless artwork, a secret room, and Nazi photos and propaganda, which makes her fear that the rigid, reserved woman she had known was a Nazi collaborator.

The past narrative reveals the extraordinary, unlikely partnership between two women who have taen different approaches to the war. Estelle Allard, Aurelia's grandmother, endures crippling grief overt the Nazi abduction and deportation of her friend, Rachel, and her family, a Jewish woman Estelle considered a sister. Sophie Seymour lost her husband during a German air raid, and though suffering unspeakable heartbreak from it, turns to life as an English spy, going deep undercover as the Allies seek critical intelligence for Operation Overlord.

To survive, Estelle embraces her socialite upbringing, mixing in at the Ritz with the occupying Luftwaffe officers and gaining their trust. As the conflict drags on, Estelle and Sophie band together on a desperate mission to save Rachel's young niece and obtain and convey key intelligence to the Allies that could turn the tide of the war. It is a story that has been meticulously researched, and is deeply romantic and full of suspense.

The Personal History Behind The Paris Apartment - By Kelly Bowen: From as far back as I can remember, history - and especially the history wound through the branches of my own family tree - has always been a source of fascination for me. As such, I am often the recipient of "old things" found in relatives' basements and attics, an eclectic array of items boxed and marked with a label that always reads "For Kelly."

A number of years ago, one of those boxes that came into my possession contained the diary of my great-uncle, Private Percy William Shields, killed in action on the battlefields of France on September 9, 1918, age 25. In his diary, Pte. Shields wrote in great detail about his wartime experience, offering the reader a vivid glimpse into what he endured during WW1.

Twenty-two years later, both my grandfathers would serve in WW2, n the RCEME and the RCAF respectively, and while they were lucky enough to make it home, they didn't keep a diary. Nor did they speak at all about their experiences, not to their children and certainly not to their grandchildren. The subject was off limits and it was as if those years had never existed.

Except they did exist, of course, and even if my grandfather did not speak of them directly, he did share his service in the RCEME with me in a way that I didn't recognize until I was much older.

By the time I was ten, I could read radio schematics and identify and solder the correct capacitor, resistor, or transistor into place. Together we rebuilt a hulking '38 RCA Victor and a pretty '42 Northern Electric, the latter which he presented to me for my thirteenth birthday.

Those hours fueled my fascination with radios and their many uses during the war, and I found the stories of the individuals who relied on those radios to send vital and clandestine information back to the Allies riveting. The fictional characters of Sophie Seymour and Estelle Allard in The Paris Apartment are based on the very real lives of Pearl Witherington Cornioley, Virginia Hall, Christine Glanville, Nancy Wake, Josephine Baker, and Andree de Jongh.

In 2018, I stumbled across the story of a Paris apartment found locked and untouched since WW2 when its owner, MMe. De Florian fled the occupying Nazis, never to return. I became transfixed by the questions that discovery provoked, and the similarities that were reflected in my own family tree. What makes people choose to either share or keep private an experience that so drastically impacts their life? Is it better to share such an experience in detail with those left behind the way my great-uncle did in his diary? Or is it better to leave the past sealed, sharing only aptitude from those years, the way my grandfather did with me?

There is no right or wrong answer to any of those questions, and the characters in The Paris Apartment must make their own choices, for their own reasons. And for those who come behind, for those lucky enough to uncover the sacrifice and the courage of the generation before them, do those reasons matter?