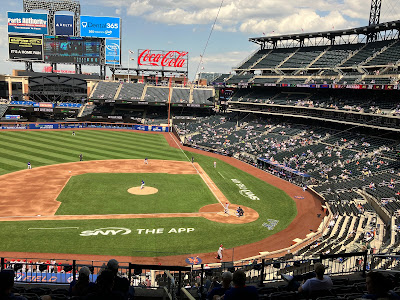 After a rainout on Monday night, the Mets and the St. Louis Cardinals began their four-game series with a Tuesday twinbill. The Mets took the opener 3-1, while St. Louis won the second game, 4-3. The Mets' record is now 24-14, in first place in the National League East, six games ahead of Miami and Philadelphia.

Trevor Williams got the start for the Mets in this one, and he turned in a fine performance in his second start of the season (he has just four other appearances in relief). Since he pitched for the Cubs prior to joining the Mets, it was his 20th career outing, and 15th start, against St. Louis, the most against any opponent. Entering this one, he had a 4-6 record with a 5.64 ERA against the Cardinals in his career.

Williams retired St. Louis in order in the first, and struck out the side in the second before running into trouble in the third. He allowed a leadoff single to Brendan Donovan, and then a one-out single to Tommy Edman. Williams settled down to strike out Paul Goldschmidt and strike out Nolan Arenado.

The Mets have him an early lead in the second when Dom Smith led off with a single, and they loaded the bases with nobody out before Smith came in on a force out hit into by Travis Jankowski. St. Louis starter Miles Mikolas then got out of it by getting Patrick Mazeika to pop out to shortstop and Brandon Nimmo to fly out to right field.

The Mets added to it in the third, and it started with Francisco Lindor reaching on an error by Donovan at shortstop. Jeff McNeil followed with an RBI double, on a hit that he lined by St. Louis first baseman Juan Yepez, that brought in Lindor. After a Pete Alonso pop-up, Smith doubled home McNeil to make it 3-0 Mets.

Williams worked around a Dylan Carlson double in the fourth, with the help of two strikeouts, to end his afternoon. The big right-hander went four innings, and allowed no runs on four hits and no walks, with six strikeouts.

Jake Reed was first out of the Mets bullpen, having just been called up from the minor leagues for this game, and he entered in the fifth. He walked Donovan to start off the inning, and then Edman also drew a free pass with one out. Once again, Goldschmidt was up with two on and one out, and once again, he could not deliver, striking out this time, and same for Arenado, who flew out to left to end the threat.

Reed then retired St. Louis in order in the sixth inning, and closed it out by getting Carlson to ground one back to him.

Mikolas, despite the tough start and the Mets running his pitch count up early (24 in the first inning), settled in and held the Mets at bay until he was lifted after six innings. He entered this one with a 3-1 record and a 1.49 ERA, and the Mets were able to get three runs (two earned) on seven hits and a walk, with five strikeouts.

Seth Lugo relieved Reed, and he retired St. Louis in order in the seventh, and notched a strikeout of Reed. Drew Smith pitched the eighth, and in a continuation of the trouble he had Sunday, allowed a solo homer to Goldschmidt to make it 3-1 Mets.

Edwin Diaz come on in the ninth, and after striking out Yadier Molina and Carlson, he ran into some trouble. Tyler O'Neill singled, and Donovan drew a walk, but Diaz revved it up and struck out Harrison Bader to end it, and earn his ninth save of the season.

Reed, with those two solid innings of relief, was the pitcher of record in the fifth inning, and with that, he earned the victory, his first in the Major Leagues.

The Mets greeted old friend Steven Matz, who they were facing for the second time this season, with a home run to left off the bat of Mark Canha, the second hitter of the game.

That made it 1-0 Mets, and their starter, Taijuan Walker, ran with it, as he breezed through the first three innings, yielding only a single to Paul Goldschmidt in the first.

St. Louis’ next hit came from Brendan Donovan to lead off the fourth, and he came in to score on a double from Goldschmidt.

The Mets took the lead back in the bottom of the fourth with Eduardo Escobar hit a solo shot to right field with two outs in the frame to make it 2-1 Mets. This continued the big day for the Mets third baseman, as he also had two hits and a walk in Game 1.

The Cardinals got that run back and then some in the fifth. Andrew Knizner singled and came into score on a Tommy Edman triple to tie it at 2.

Donovan then walked, and Goldschmidt followed with his second RBI double in as many innings to bring home Edman and make it 3-2 Cards. Walker then got Dylan Carlson to fly out to center field, intentionally walked Corey Dickerson to load the bases, and then retired Tyler O’Neill to end it.

That was it for Walker, as he went five innings, and allowed three runs on seven hits and two walks, while striking out four.

Matz responded to being handed the lead by striking out the side in the fifth. Since it was the Mets’ 7-8-9 hitters (J.D. Davis, Travis Jankowski, and Tomas Nido), making ur two full times through the Mets lineup, he did not come back for the sixth.

St. Louis turned to Andre Pallante in the sixth, and after he got Brandon Nimmo to ground out, he walked Canha, Francisco Lindor, and Pete Alonso to load the bases, and that made for a quick ending to his night.

Genesis Cabrera came on to face Escobar, who already had a home run on the night, but this time, he went fishing at a pitch low and away and struck out. Jeff McNeil then popped out to third base to end the frame.

The Mets had quite a scare in the seventh inning when Brandon Nimmo hit a grounder to shortstop with two out and a runner on, and after the throw just beating him, he came up lame after he ran through the bag. He was diagnosed with a bruised right quadriceps.

In the bottom of the eighth, with Ryan Helsley on for St. Louis, the Mets rallied. Lindor walked, and then it appeared as if Escobar struck out to end the inning, but a passed ball allowed him to race to first to keep the inning going. McNeil singled home Lindor to tie it at 3.

Joely Rodriguez, who came on for the Mets at the end of the eighth, stayed on for the ninth, and he walked Donovan and Carlson, and left with them on base with one out.

Adam Ottavino came on and he struck out the first batter he faced, Nolan Arenado, but he then gave up a single to O'Neill to bring home Donovan and make it 4-3 St. Louis.

Giovanny Gallegos, who should be known to New York baseball fans as the pitcher the Yankees sent to St. Louis for slugger Luke Voit in 2018, came on to close it out. After he got Travis Jankowski to ground out, he walked Dom Smith and gave up a single to Luis Guillorme in his first at-bat of the night (he took Nimmo's spot in the order).  Gallego then struck out Canha and Lindor struck out to end it, and he earned his seventh save of the season.