The Yankees split their Mother’s Day Sunday doubleheader with the Texas Rangers, as they won the first game, 2-1, on a walk-off home run by Gleyber Torres, and dropped the second game, 4-2.

The Yankees entered action amidst a historic start to their season, as it is just the seventh time in their history that they have won 18 of their first 25 games. In the other six instances - the most recent of which was 2003 when they started 20-5 - they reached the World Series, winning it all five of the six times, with the only exception being 2003.

The Yankees' 18-7 record entering Sunday was the best in baseball, tied with the Los Angeles Dodgers, who were also 18-7 through Saturday.

This was the Yankees' first time on the field since Wednesday in Toronto, when a 2-1 loss to the Blue Jays broke an 11-game winning streak. The Yankees went five of six on that road trip, as they swept Kansas City and took two of three in Toronto. Thursday was an off day and the first two games of the series with Texas were postponed due to the massive rain storm.

Boone said of how the team handled the layoff and how Sunday's games begins a stretch in which the Yankees play 23 games in 22 days, "We should be fine. Most of the guys were in Friday, whether it was throwing, doing some hitting, treatments, whatever, and then everyone was in to work out and do our advance stuff yesterday, so not too worried about that. Obviously, now 23 in 22, that's a grind, but such is the big league season. We'll kind of weather it and expect to thrive."

Gerrit Cole started the first game, coming off an eight-day layoff after his outing on April 30 in Kansas City. That night, he threw six shutout innings, scattering five hits and two walks, while notching six strikeouts for his second win of the season, and second quality start.

Boone, in his pregame press conference, said of how likely he was to let Cole go deep in this one, "He's in a good place to do that, so again I think the day kind of dictates that, and the outing kind of dictates that, you know, where is he physically as the day unfolds. Ideally, we get into the game deep with him and puts us in a good spot moving forward. You know, the game will dictate that."

Cole was superb, as he went 6 1/3 innings, allowing just one run on five hit with 10 strikeouts. It was his 13th double-digit strikeout game as a Yankee, seventh-most in franchise history, with Ron Guidry having the most with 23, followed by David Cone (21), CC Sabathia (20), Al Downing (17), and Masahiro Tanaka and Whitey Ford, who each have 14.

Texas put the pressure on Cole early, as Marcus Semien and Adolis Garcia each had singles in the first inning, but Cole got out of it by striking out Nathaniel Lowe. In the secon, Cole worked around a leadoff double to Mitch Garver and a two-out walk to Andy Ibanez by getting a Brad Miller groundout to end that inning.

That started a stretch in which Cole retired 10 straight Rangers, through the end of the fifth inning.

Rangers starter Dane Dunning matched Cole, and kept the Yankees off the board until the sixth when Aaron Judge singled, raced to third base on an Anthony Rizzo hit, and scored on a sacrifice fly by Giancarlo Stanton to make it 1-0.

Cole, despite being at 105 pitches, came out to pitch the seventh inning, and he struck out Garver to start it out. Calhoun was up next, and he deposited one into the right field seats, just inside the foul pole, for a solo home run to tie the game. That was all for Cole, who reached 114 pitches with that one.

"I just don't want to walk him there, but I also don't want to give up a homer," said an agitated Cole in his press conference after the game. "I've had a lot of good battles with him dating all the way back to the Pac-12, and I just got beat, but a lot of good today."

In the bottom of the ninth, Gleyber Torres led off, and on a 3-1 count, launched one into the seats in right field for a game-winning home run.

It was Torres' seventh career walk-off hit, and since that came since he debuted in 2018, they are the most in the Major Leagues in that time span. It was his second career walk-off homer, with the first coming on another Sunday in May, as part of a stirring comeback win against the Cleveland Indians on May 6, 2018.

Boone, in his postgame press conference, said of Torres having a knack for big hits late in games, "He does, I'm not sure why. Part of it is he's a really good player and a good hitter, and I think we've seen him time and again, whether it's playoff situations, biggest situations, it seems like he does ratchet up that concentration level a bit. Cold day out there, it was good to see him stick one, that just happened quick, you're thinking of all the possibilities there, and he ends it real quick, it was nice."

One of those "possibilities" Boone was alluding to was that Yankees closer Aroldis Chapman was warming up in the bullpen for a possible appearance in the 10th inning.

Cole said of the game, "Gleyber's seeing the ball really well off lefties right now; it was a great swing. We had some traffic on them, I thought Dunning was exceptionally sharp, have never seen him that good, certainly, and we just couldn't push through. I didn't think that we threw any at-bats away, we stayed locked in, and obviously pushed the last one across that got us the win.

"As far as what we were doing today on the mound, I thought that, really, at times, we could throw any pitch. The wind was affecting the cutter a bit today, I just couldn't get it to really kind of go left due to the wind, and on the flip side, it was kind of blowing the fastball up and away, the crosswind today. I thought we used the elements well."

Giancarlo Stanton, who was playing right field in this one, gave the Yankees an early lead in this one with a two-run homer in the third, his sixth of the season.

Yankees starter Jordan Montgomery had that support stand out, as he scattered two hits over the first five to keep Texas off the board.

Texas got on the board when Eli White led off the sixth with a home run just over the fence in right to make it 2-1.

The lefty was pulled after he gave up a double to Jonah Heim to open the seventh.

Michael King, who is arguably the most reliable pitcher in the Yankees bullpen, came on to try to hold the 2-1 lead.

King walked Kole Calhoun before striking out Nathaniel Lowe and getting Andy Ibanez to hit into a force out.

With Brad Miller, who was surprisingly pinch-hitting for Charlie Culberson up, King threw a wild pitch, allowing Heim to score to tie it.

Miller then got the big blow, a two-run shot into the Yankee bullpen to make it 4-2 Texas.

The Yankees had a chance to tie it in the bottom of the seventh, as they loaded the bases against Rangers reliever Matt Moore, with a single by Jose Trevino and a pair of walks, but Texas turned to Dennis Santana to face Aaron Judge and he got him to fly out to end the inning.

The light shines on Yankee Stadium: There was the slightest hint of the sunset amidst the clouds around 7:45 during the eighth inning of Game 2. 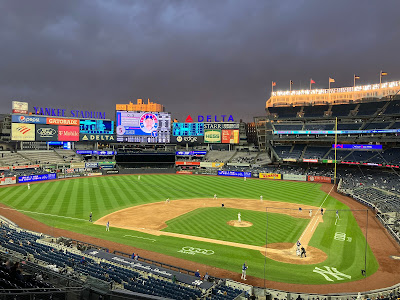 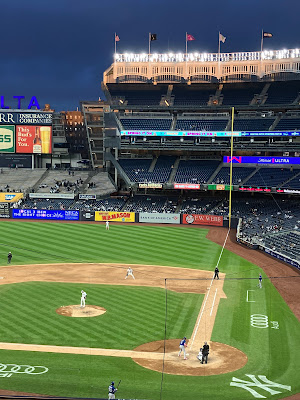