Joel and Victoria Osteen will host a night of hope and inspirations at Yankee Stadium on August 6, their third time holding servies there, Yankee Stadium Events announced recently.

This will be the Osteens' first large-scale public gathering outside of Houston since 2019. The night will include special guests, inspirational speakers, and praise and worship music from sward-winning artists. 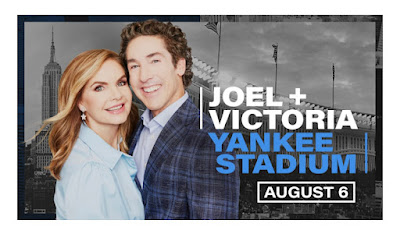 Joel Osteen said in a statement, "Victoria and I are excited to bring this evening of inspiration back to the iconic Yankee Stadium and the amazing people of New York. It will be an esciring time for us to be together again. I believe now, more than ever, is the time for us to shine, to be a voice of peace and hope, and draw closer to God."

Tickets will go on sale to the general public this Tuesday, May 17 at 10 a.m., online at www.yankees.com, www.joelosteen.com, and www.ticketmaster.com. For more information, check out yankees.com/upcomingevents.

The Osteens' most recent appearance at Yankee Stadium was for "A Night of Hope" on June 7, 2014. Their first visit to Yankee Stadium was on April 25, 2009, and it was the first non-baseball event at the new Stadium, which had just opened.

About Joel Osteen and Lakewood Church: Joel and Victoria Osteen are the pastors of Lakewood Church in Houston, Texas - America's largest church and one of the nation's most racially and socioeconomically diverse. Millions have attended Joel and Victoria's sold-out events in arenas and stadiums across the United States and abroad. Over 70 million people connect with them monthly through their digital platforms. Osteen's weekly podcast is a perennial top-10 on iTunes. More than 10 million viewers watch his televised services each week in the United States alone with millions more in 100 nations around the world. Joel is a New York Times #1 best-sellign author and can be heard 24 hours a day on Joel Osteen Radio SiriusXM channel 128.