Books: "Can't Knock The Hustle" On the Brooklyn Nets Navigating A Transformative Time 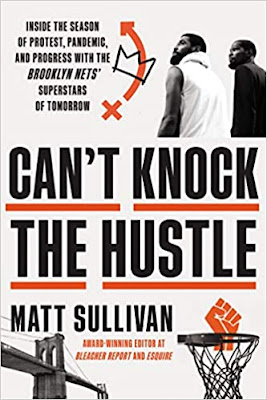 Can't Knock The Hustle: Inside the Season of Protest, Pandemic, and Progress with the Brooklyn Nets' Superstars of Tomorrow

The NBA's 2019-20 season was one of the most historic in the history of the league, as the sport dealt with the coronavirus pandemic, the untimely death of one of the greatest players of all-time, Kobe Bryant, and a burgeoning social justice movement after the death of George Floyd.

One team was at the center of it all, the Brooklyn Nets, and Matt Sullivan, who has been an editor of the New York Times, The Guardian, and The Atlantic, chronicled the team's roller-coaster ride of a season in the deeply engrossing Can't Knock the Hustle.

The season began basically in late June with the signings of free agent superstars Kevin Durant and Kyrie Irving, which made the Nets  the most intriguing team in the NBA. They didn't know what to expect out their high-profile additions. There were questions about adding Irving - who left the Boston Celtics on less-than-amicable terms and had a history of injuries - to what was a cohesive unit, with a teammate calling him "the enigma of the century." Durant was expected to miss most, if not all, of the season, as he recuperated from a horrendous knee injury in that year's NBA Finals with Golden State.

Just as the season was about to tip off in October 2019, there was a controversy surrounding a tweet about China by then-Houston Rockets General Manager Daryl Morey showing support for the Hong Kong protesters. that sent the league into a frenzy, and eventually would see the Nets' new owner, Joe Tsai, and NBA Commissioner Adam Silver battling LeBron James and the players.

On January 26, the NBA and the rest of the world was saddened by the news of Bryant's death in a helicopter crash in California, and Sullivan writes about Bryant's last public appearance at a Nets game on December 21, 2019.

Through it all, the Nets had a hard time getting any momentum, and that led to the firing of their highly-regarded coach, Kenny Atkinson, who had guided the team from the doldrums of the NBA to a playoff team, on March 7.

If that wasn't shocking enough, just four days later, the NBA shut down due to the coronavirus pandemic after Utah's Rudy Gobert tested positive for the virus. The Nets had nine players test positive, and there was a controversy when the team secured tests before they were widely available to the public.

In late May and into June, after the death of George Floyd, the Nets' arena, the Barclays Center, became the hub of protest in Brooklyn, and the yearning of the players to be a voice on civil rights through the summer led to the players to question whether to resume the season at the bubble in Disney World in Orlando in late July or not. At one point, Irving led a boycott of the bubble. While in
Orlando, the Milwaukee Bucks, chose to stage a walk out on their game after the death of Jacob Blake in late August, and the rest of the league supported them, which led every other sport to follow suit and shut down for three days.

Sullivan expands on the theme of activism of the NBA's superstars by venturing away from the Nets, and focusing on LeBron James, and the role he played in everything that happened that season, showing his outsize influence.

Sullivan's in-depth reporting covers the span of 16 months, and includes accounts of when he analyzed Supreme Court documents with Irving, spent a very late night at Durant's house, marched through the streets, and meditated on Zoom with Nets players.

As Sullivan sums up those chaotic months, "Brooklyn's arena became the most recognizable gathering place in a new civil rights movement sprouting quickly across the globe. Basketball managed, in a miracle of leadership and science, to revive an entertainment economy that the virus had disposed of, as the NBA sequestered thousands of people in Disney World to play and protest at the same time. By then, the Nets roster included even more radical disruptors than when the year-long season began."