Books: "Choose Me" By Tess Gerritsen and Gary Braver 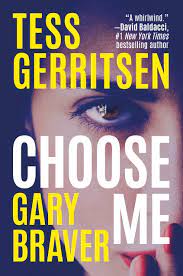 By Tess Gerritsen and Gary Braver

Tess Gerritsen's path to her writing career is one worthy of a novel itself. It wasn't until she was on maternity leave from her job as a physician that she began to write. She has written twenty-eight suspense novels, and they have been translated into forty languages. Her series featuring homicide detective Jane Rizzoli and medical examiner Maura Isles inspired the hit TNT television series Rizzoli & Isles.

Gary Braver, the pen name of college professor Gary Goshgarian, is the bestselling author of eight critically acclaimed mysteries and thrillers, including Gray Matter and Flashback, which was the first thriller to win the Massachusetts Book Award. Two of his works have been optioned into film, including Elixir. As Goshgarian, he teaches science fiction, horror fiction, bestsellers, and fiction writing at Northeastern University.

In their new thriller, Choose Me, the two authors, who have been close friends for twenty-five years, explore the story of an affair that leads to murder, from both the male and female perspectives.

Taryn Moore is a young, brilliant, and beautiful college senior who is desperate for love and will do anything to get it. Jack Dorian is a college professor who is popular with his students and feels neglected by his busy doctor wife.

They find each other irresistible, though Jack immediately regrets his choices and is frantic to put his indiscretions behind him. Then, Taryn turns up dead, after falling from the balcony of her apartment.

When Detective Frankie Loomis, a seasoned law enforcement agent and single mother, arrives at the scene and examines the clues, she believes there's more to the story than suicide. This is especially true when her investigation reveals surprise information that could have been reason enough for a young woman to kill herself, or also a possible motive for murder.

When Frankie discovers details of Taryn and Jack's torrid affair, she considers Jack Dorian to be the most likely suspect. She is certain that Jack is a liar, but is he a killer?