Books: "Winning In Both Leagues" By Frank Cashen, Who Led Mets to Glory 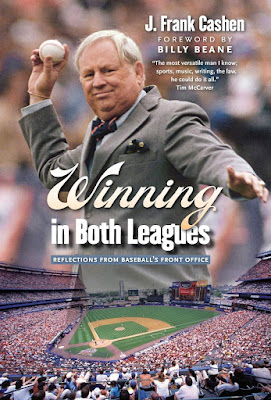 Winning in Both Leagues: Reflections from Baseball's Front Office

Former Mets General Manager Frank Cashen's autobiography, Winning in Both Leagues, which was originally released in 2014, is now out in paperback.

Cashen is most remembered for shepherding the team through the 1980s. He built the team up by drafting stars like Doc Gooden, Darryl Strawberry, and Ron Darling, and made key trades for Gary Carter and Keith Hernandez, to bolster the team, which culminated in the 1986 World Series.

Cashen's career began with the Baltimore Orioles amidst their dynasty in the late 1960s and early '70s. He serves as executive vice president, cheif operating officer, and general manager, working with manager Earl Weaver and players including Jim Palmer, Frank Robinson, and Brooks Robinson.

After that, he was tapped by Mets owner Nelson Doubleday, Jr., to guide the team back to glory after a moribund time in the late 1970s, and he became the only General Manager to win the World Series in both leagues.

The foreword is by Billy Beane, the longtime General Manager of the Oakland Athletics, who was drafted by the Mets under Cashen.

In this excerpt, Cashen writes of the expectations heading into their championship season: "As the 1986 season aproached, we felt the team was ready to make a run at the big prize. In spring training Davey Johnson told his players he expected to win it all. Not only that, he said he expected to dominate. Johnson's orders in Florida in 1986 proved prophetic. The Mets dominated the Eastern Division of the National League, then the NL playoffs, and went on to that historic win over the Boston Red Sox in the World Series.

It was the end of a six-year journey for me. The fulfillment of a promise I made to Nelson Doubleday when he hired me to run his club in 1980 - the world championship!

In my mind, four players stood out throughout the regular 162-game season. Veterans Keith Hernandez and Gary Carter were rock solid all the way. Not surprisingly, so were two younger players - outfielder Darryl Strawberry and pitcher Dwight Gooden.

Carter drove in 105 runs to lead the club in that department and Hernandez hit .310 while earning his ninth straight Gold Glove at first base. Strawberry hit 27 homers and had 93 RBIS while Gooden posted a 17-6 record, striking out over 200 hitters for a second straight year.

There were other luminaries that season, especially pitchers. Lefty Bob Ojeda won eighteen games while losing five and lived up to all the promise I foresaw when I first laid eyes on him at a Minor League game in Pawtucket, Rhode Island. Ron Darling was 15-6 and compiled a 2.81 ERA. Young Sid Fernandez, the Hawaii native, won sixteen and lost six, and a couple of bullpen specialists - Jesse Orosco and Roger McDowell - worked their trade in a special way. The right-hander, McDowell, made twenty-five appearances with twenty-two saves, and Orosco, the left-hander, had twenty-one saves.

The club won 108 games that '86 season, the finest performance every by a Mets club. They took over first place in the Eastern Division on April 23 and never looked back. In early September, the Mets were twenty-two games ahead of second-place Philadelphia and had alreaydy clinched the division title. That, of course, brought on the perennial discussion about whether it is advantageous to win your division title early so your club is well rested for the playoffs, or to win it late so regular-season sharpness carries into the postseason games. That was the case in 2011 when the St. Louis Cardinals improbably made it to the playoffs as the wild card on the last day of the season, then went on to win the World Series. As somebody whose club has won it both early and late, I'll take the former.

The New York press described the '86 Mets as a cocky bunch playing with a swagger. As someone who had seen it before in some of our good Orioles teams, I prefer to say that the Mets performed with a noticeable degree of confidence. They had fun playing and they were fun to watch. Every couple of weeks, it seemed, they were breaking some old Mets mark, and those new records seemed to come with consummate ease. Young ballplayers with talent and ability are not much different from the successful Wall Street types. The '86 Mets came from a background of achievement - in little league, high school, college, and Minor Leagues. There were a stripe above most and they reflected it in the MLB. They werre not showing off; they were confident young men.

We were the toast of the town, and the observant and oft-critical New York press was signing out praises. It was not always so. As a former sportswriter, I understood and appreciated the important job of the press. But being the general manager and spokesman for the Orioles and the Mets quickly taught me that the view is different from the other side. Maybe I'm thin-skinned, but I found it unacceptable for a baseball writer, maybe a year or two out of college, to set himself up as the chief critic of a veteran manager or general manager. To be frequently misquoted does not go down well either, especially if it's deliberate. One time I confronted a reporter who had quoted me without ever having interviewed me. His response: 'I wrote what I thought you would have said if I interviewed you.' In New York the media focus was intense. Everything was magnified. Of course, it was not just the print media. Every time I'd walk on the field at Shea Stadium TV crews were ready to stick a microphone in my face. You had to be ready to respond on the spot and accurately. The toughest job is to be consistent. You had to remember what you had said previously to another reporter. All in all, I can't think of any better way to become a general manager than being a writer and learning the game from the standpoint of who reports it."