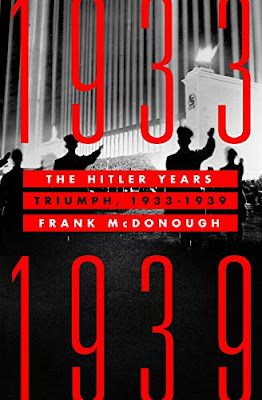 Frank McDonough is an internationally renowned expert on the Third Reich, and has written many books on that era of German history, including Opposition and Resistance in Nazi Germany and The Gestapo. He has appeared on numerous TV programs, including the six-part series, "Nazi Secrets," for National Geographic in 2012 and a ten-part series, The Rise of the Nazi Party, for the Discovery Channel in 2014. He is such a foremost expert on Nazi Germany that the History Channel places his Twitter account, @FXMC1957, in the Top 30 Most Popular Historical Twitter Accounts in the World.

The Hitler Years: Triumph, 1933-1939, is the first volume of a two-part series on the Third Reich under Adolf Hitler, with the second part, Disaster, coming this October.

McDonough begins this epic with Hitler's path to power in the years leading up to his appointment as German Chancellor of a coalition government by President Paul von Hindenburg on January 30, 1933. Hitler had won over most of the population to a renewed vision of the Third Reich, but within a few months, he installed a dictatorship, jailing and killing his leftwing opponents. This terrorized the rest of the population and drove Jewish people out of public life.

The Great Depression was particularly painful for Germany, and Hitler embarked on a crash program of militaristic Keynesianism, which revived the economy and helped the country reach full employment through massive public works, vast armaments spending, and the cancellations of foreign debts.

Germany had been reborn as a brutal and determined European power. These years were marked by domestic triumph, cunning maneuvers, and pitting neighbors against each other. Hitler was biding his time, which set him up for when he would see his ambition realized. What drove Hitler's success also became his downfall, as he had a relentless belief in war as the motor of greatness, a dream of vast conquests in Eastern Europe and an extremely fanatical racism.

In this excerpt, McDonough writes of the conditions in Germany after World War 1 that made Hitler's ascent possible: "Even if Hitler had never come to power Germany would probably have had a right-wing nationalist coalition during this period. Conservative power brokers in German politics had never accepted Germany's defeat in the Great War and they had utter contempt for democracy. A right-wing nationalistic regime, supported by the army, would have almost certainly attempted to revise the Treaty of Versailles, which was regarded by most Germans as a gross injustice, and they may even have done so with the blessing of the British and the French governments. However, without Hitler as leader, it is extremely doubtful that such a conservative-nationalist regime would have resorted to mass genocide founded upon racist and anti-Semitic ideas.

Hitler and his radical National Socialism was therefore central to what happened in Germany from 1933 to 1945. It is impossible to believe that German - or indeed world - history would have taken the same course had Adolf Hitler never lived. Yet Hitler did not create the very specific circumstances that persuaded him to pursue a career in politics and which crowned him leader. Without the Great War and Germany's strong sense of humiliation, the Nazi Party would not have needed to exist.

Germany's defeat in 1918 resulted in the establishment of the Weimar Republic, which lasted from 1918 to 1933. From the very beginning it was beset by economic and political difficulties. It only survived between 1919 and 1933 with the help of the army. Germany was almost bankrupted by the Great Inflation of 1923. Between 1924 and 1929 US loans gave the Weimar Republic some economic stability, but these loans were quickly recalled during the Stock Market crash of 1929. There was a 'run on the banks' in Germany and unemployment soared from 1.6 million in October 1929 to 6.12 million by February 1932. The government could not afford to pay unemployment benefits, which only added to the misery of the population. Those still in work saw their wages cut. There was starvation in rural areas as agricultural prices plummeted. The collapse of the German economy led to a further mistrust of democracy among the people, many of whom now yearned for a strong leader to revitalize the nation.

On to this stage stepped Adolf Hitler. The popularity of his Nazi Part had increased dramatically during this severe economic downturn as he moved from the radical fringe to the political mainstream. In 1928 just 2.8 per cent (810,000) voted for the Nazis. In 1930 this jumped to 18 per cent (6.4 million). By July 1932 the Nazi Party was polling at 37.2 per cent (13.7 million). This proved the peak of electoral popularity before he came to power. In the November 1932 election support for the Nazi Party fell by 4 per cent. Similarly, the German Communist Party (KPD) saw its vote share increase from 10 to 17 per cent between 1928 and 1932. Combined, this meant that by July 1932 the two parties that promised to destroy democracy were supported by 54.2 per cent of German voters...

Support for the Nazi Party came at first from the lower-middle-class voters in rural Protestant areas. By 1932 Hitler was attracting the middle classes in Germany's big cities: white-collar workers, doctors, civil servants and independent traders and small businessmen all contributed to the huge upswing in voting support. Hitler had managed to unite conservative voters. No party in a large democratic state had ever risen from such obscurity so quickly...

Alarmed by Hitler's popularity and the strong performance of the Nazis in elections, the elderly President Paul con Hindenburg tried to establish a right-wing authoritarian regime, which excluded Hitler and the Nazi Party. Article 48 of the flawed Weimar constitution gave him unlimited emergency powers, so he appointed three conservative chancellors: Heinrich Bruning (1930-32), then Franz von Papen (June-November 1932), and finally General Kurt con Schleicher, who lasted just fifty-seven days. All proved deeply unpopular and none were party leaders.

Hitler later claimed to have 'seized power' on 30 January 1933, but in fact his appointment as Chancellor was entirely legal and constitutional. Hindenburg had been persuaded by his narrow conservative group of advisers that Hitler should be given the chance to rule and perhaps he could even be controlled to serve their own ends. So there was no violent revolution in Germany in 1933 as there had been in Russia in 1917 or France in 1789."