"The Box In The Woods" By Maureen Johnson 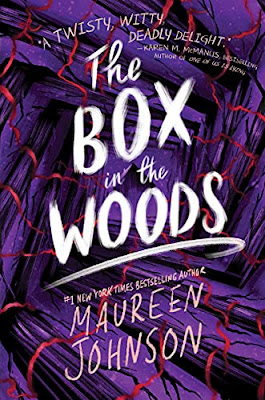 The Box in the Woods

Maureen Johnson is the New York Times and USA Today bestselling author of more than a dozen young adult novels, including the Truly Devious series, the Shades of London series, Suite Scarlett, and 13 Little Blue Envelopes. Her collaborative books include Ghosts of the Shadow Market (with Cassandra Clare), as well as Let It Snow (with John Green and Lauren Myracle), which was also a hit feature film on Netflix.

Johnson is also active in social justice issues and politics both online and IRL. She initiated and organized an open letter in support of trans and nonbinary communities that was signed by more than 2,000 North American writers, inclyding Margaret Atwood, Roxane Gay, and Neil Gaiman, as well as publishers and other members of the literary world.

The Box in the Woods features a character fans of the Truly Devious trilogy (Truly Devious, The Vanishing Stair, and The Hand on the Wall) are familiar with: intrepid student detective Stevie Bell, in a new stand-alone novel. Set at an old-fashioned sleepaway summer camp with a story that unfolds in two timelines - the 1970s and current times - this mystery is darker, bloodier, and more terrifying, although it's tempered by Johnson's signature blend of wit and humor.

Stevie is back home from her boarding school for the summer after the tumultuous events of the school year. She feels listless without a new case to pursue, until her curiosity is piqued by a message from the new owner of Sunny Pines Sleepover Camp, which was once known as Camp Wonder Falls, and the site of the notorious and gruesome murders of four camp counselors in 1978.

The infamous case was known as "The Box in the Woods Murders" because of where and how the bodies were found - and it was never solved. The new owner wants to make a true crime show about the case. He's read of Stevie's sleuthing experience and offers her an invitation to come to the camp under the guise of being a counselor and figure out what's really going on.

Stevie is invited to bring friends from Ellingham Academy if that sweetens the deal. Nothing sounds better than a summer spent all together investigating an old murder case. When someone dies, Stevie is certain the secrets of Wonder Falls are far more ominous than anyone could ever have imagined.

The Box in the Woods Virtual Tour with Maureen Johnson: