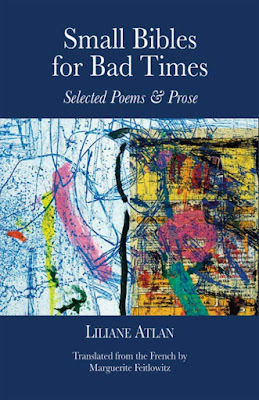 By Liliane Atlan - translated from the French by Marguerite Feitlowitz

Liliane Atlan was a visionary French writer of plays, poetry, and prose, whose work was inspired from having to hide, with her sister Rachel, with a family in the Auvergne during the Holocaust.

As Atlan recounted in Theatre Pieces: An Anthology by Liliane Atlan, which was also translated by Marguerite Feitlowitz: "We had to entertain ourselves. My sister would dress up, would disguise herself. She was the audience. I was the stage: the actors, the author...Everything lived within me: I screamed, gesticulated, died. I would speak out my lamentations, my dirges, my psalms. After the war nothing seemed possible. There was no way out for us. Man and his goals had died in the concentration camps."

After the war, Atlan went on to study at the groundbreaing Gilbert Bloch school, where the teachers had been leaders in the Resistance. This immersion in Torah, Talmud and Kabbalah, alongside science and contemporary literature, helped make her into a genre-defying, feminist, and political writer, active in both France and Israel.

It is hard to characterize Atlan's work, as she is, at once, a "Jewish writer," a "Holocaust writer," and a pioneering theater artist. In the late 1960s, while living in San Francisco, she was introduced to fresh forms of collective theatre creation based on the improvisation that would occur among actors in rehearsal and with the audience in performances.

When she returned to Paris, Atlan employed those techniques in pioneering treatment programs for drug addiction, initially for addicts in post-withdrawal in 1975, and the following year at the Centre Medical Marmottan for in-patients. She was also one of the first, in the early 1980s, to experiment with video, sound, and spatial technology.

Atlan's poetry and prose comprise a very important part of her oeuvre. Small Bibles for Bad Times is the first book that has Atlan's work in English, translated by Marguerite Feitlowitz, and they first met in the 1980s in New York when working on Theatre Pieces.

The prose is presented in English, with the poetry presented side-by-side in French and English. Atlan's work has plenty of dramatic elements, with scenes and vignettes; desires, plots, and characters that are engaged in mortal conflict, sometimes within a single mind.

The poems largely depend on cadence, breath, and beat, and ritual is interrogated even as it is performed. Conventional wisdoms are discarded and mocked, while study is sacred, belief suspect, and genuine lessons exist to be learned the hard way.

Atlan's creative quest is one to "find language to say the unsayable...to [find a way] to integrate within our conscience, without dying in the attempt, the shattering experience of Auschwitz."