Books: The Effect of the Pandemic On Politics Examined In "Aftershocks" & "San Fransicko" 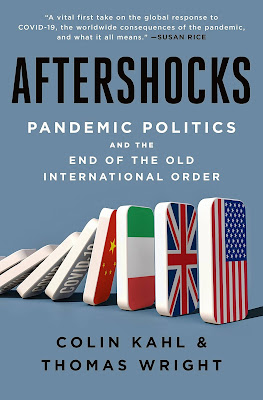 Aftershocks: Pandemic Politics and the End of the Old International Order

Colin Kahl was the national security advisor to Vice President Joe Biden from 2013 to 2017, and was the deputy assistant secretary of defense for the Middle East from 2009-13. He is currently the Co-Director of the Center for International Security and Cooperation at Stanford University, Steven C. Hazy Senior Fellow, and professor of political science at Stanford University.

Thomas Wright is a senior fellow at the Brookings Institution and a contributing writer at The Atlantic. He has written several pieces on the foreign policy of former President Donald Trump, mixing research into the historical record of Trump's remarks over three decades with reporting from contacts inside and near the administration. He is also the author of the book All Measures Short of War: The Contest for the 21st Century and the Future of American Power.

Kahl and Wright, who are two of America's leading national security experts, offer the most definitive account of the global impact of the COVID-19 pandemic and the political shock waves it will have on the United States and the world order in the 21st century in their new book, Aftershocks. It is one of the most riveting and comprehensive accounts you will read on the year 2020, one of the strangest, yet most consequential, years ever.

The pandemic killed millions, infected hundreds of millions, and laid bare the deep vulnerabilities and inequalities of our interconnected world. The economic crash that resulted was the worst since the Great Depression, and the International Monetary Fund estimated it will cost $22 trillion in global wealth over the next few years.

Two decades of progress in reducing extreme poverty was erased in just a few months, and already fragile states in every corner of the world were hollowed out. The clash between the United States and China, which was heating up due to a trade war, boiled over, and the worldwide contest between democracy and authoritarianism deepened.

The pandemic was a global crisis that necessitated a collective response, and yet international cooperation nearly broke down, with key world leaders hardly on speaking terms. Kahl and Wright draw on interviews with officials from around the world and extensive research to show how nationalism and major power rivalries constrained the response to the worst pandemic in a century.

In this excerpt, Kahl and Wright touch on the context of the pandemic: "For the three decades prior to 2020, the world tended to work together during times of crisis - whether it was to deal with the aftermath of the collapse of the Soviet Union in 1991, the initial response to the terrorist attacks of 9/11 in 2001, the HIV/AIDS epidemic ravaging sub-Saharan Africa in 2003, the financial crisis of 2008-9, the Ebola outbreak of 2014, or the rise of the Islamic State in Iraq and Syria the same year - with the United States leading the way. The cooperation that occurred was often incomplete and imperfect, but it did make a difference. This cooperation had been fraying for several years, and in 2020 it was torn asunder. An international experiment ensued: What would happen in a global crisis if world politics was dominated by nationalist governments that refused, or were unable, to cooperate with one another? On the eve of the COVID-19 pandemic, the United States was led by President Trump, an avowed American Firster who saw international politics as a transactional zero-sum contest. Meanwhile, as the United States turned inward, Xi Jinping shattered hopes that China would become a responsible stakeholder in the global order as he quashed dissent at home and increasingly bullied other nations abroad. Brazil and India, once bastions of democracy and multilateralism, had taken an illiberal turn. Britain and the European Union were engaged in a bitter divorce. And while humanity was more interconnected than ever, a hyperglobalized world was also awash in economic, cultural, and political grievances and besieged by viral disinformation and conspiracy theories, courtesy of new technologies and willing accomplices, including some of the world's most powerful people." 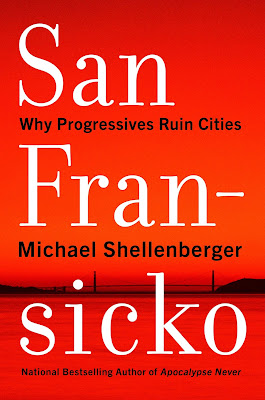 Michael Shellenberger is an invited expert reviewer on the upcoming Assessment Report for the United Nations' Intergovernmental Panel on Climate Change (IPCC), the bestselling author of Apocalypse Never, and a Time magazine "Hero of the Environment." He has written on energy and the environment for, among many outlets, the New York Times, the Washington Post, the Wall Street Journal, and Nature Energy, for two decades.

In the new book San Fransicko, Shellenberger examines what has gone wrong in his home town of thirty years, San Francisco, and other West Coast cities. He reveals that the underlying problem isn't a lack of housing, money for social programs, or political will. The heart of the chaos comes from a radical Left ideology that promotes lawlessness, defends addiction, and undermines the foundational values of civilization.

Shellenberger, who is a progressive, has spent most of his three decades in the Bay Area advocating for the decriminalization of drugs, affordable housing, and alternatives to jail and prison. The reality is that, with Democrats unable to solve the endless crime, poverty, and inequality, San Francisco is known as the epicenter of the homeless zombie apocalypse, and its massive, open-air drug markets spread across the state, with overdose deaths rising to over 70,000 from 17,000 20 years ago.

This is what led Shellenberger to take a deep dive into the roots of the crisis, and he discovered the homelessness crisis is really an addiction and mental health crisis. San Francisco, and other West Coast cities like Los Angeles, Portland, and Seattle, tolerate hard drug use, including by severely mentally ill people, but also subsidizes it, both directly and indirectly, by attracting vagrants from across the United States. Instead of fighting crime, it is enabled by progressives.

Shellenberger is out to find out why this has to be the case. The pandemic only made these severe crises in America's cities more dire, and he examines it with the same dexterity that he did the climate change issue.

In this excerpt, in comparing this to his work on the environment, Shellenberger writes: "It was anarchy of a different sort that motivated me to write San Fransicko. During the pandemic, a growing number of people in floridly psychotic states were screaming obscenities at invisible enemies, or at my colleagues and me, on the sidewalks or in the street, as we went to and from out retail office in downtown Berkeley, near the University of California. Others were angrier than ever, often inexplicably. One morning a young man came up to me as I was unlocking our front door and coughed in my unmasked face. Another man threatened to assault a colleague. In both cases our mistake appears to have been that, rather than averting our eyes, we had looked at the men.

Many of the problems stemmed from COVID-19. California's prisons, jails, and homeless shelters were under orders to reduce their occupancy. Fewer people were being arrested for public intoxication and aggressive behavior. More people started sleeping in front of our office, the boarded-up secondhand clothing store next door, or the former S&M shop next to it, frequently leaving their trash and waste for us to clean up in the morning. And we started finding people passed out on the sidewalk, sometimes with their pants arounf their knees.

But none of these problems started with the pandemic. Between 2008 and 2019, eighteen thousand companies, including Toyota, Charles Schwab, and Hewlett-Packard, fled California due to a constellation of problems sometimes summarized as 'poor business climate.' California has the highest income tax, highest gasoline tax, and highest sales tax in the United States, spends significantly more than other states on homelessness, and yet has worse outcomes. 'I came out here in 1983,' said HBO's Bill Maher to Representative Adam Schiff in the fall of 2020. 'I found paradise. I love California. I do. I don't want to leave. But I feel like I'm living in Italy in the '70s or something....I don't know what I'm getting for my super high taxes.'

I was as confused as Maher. Though I have been a progressive and Democrat all of my adult life, I found myself asking a question that sounded rather conservative. What were we getting for out high taxes? And why, after twenty years of voting for ballot initiatives promising to address drug addiction, mental illness, and homelessness, had all three gotten worse? And why had progressive Democratic elected officials stopped enforcing many laws against certain groups of people, from unhoused people suffering mental illness and drug addiction in San Francisco, Los Angeles, and Seattle, to heavily armed and mostly white anarchists in Seattle, Portland, and Minneapolis?

I wrote San Fransicko I didn't have the answers to those questions and I felt I needed them. What I discovered in the process was that much of what I and other progressives had believed about cities, crime, and homelessness was all wrong, and we needed to get it right."