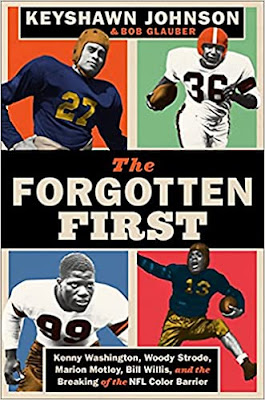 By Keyshawn Johnson and Bob Glauber

Keyshawn Johnson, the former wide receiver who played 11 seasons in the NFL for the New York Jets, Tampa Bay Buccaneers, where he won a Super Bowl ring in 2002; and the Dallas Cowboys. He was the first overall pick of the 1996 NFL Draft by the Jets after a stellar college career at USC, where he led the Trojans to the 1996 Rose Bowl. He was recently named the co-host of ESPN's morning radio show and makes regular appearances on their other shows, NFL Live, First Take, and Get Up!.

Bob Glauber has been the national football columnist for Newsday, a daily newspaper in Long Island, New York, since 1992, after four years covering the Jets, Giants, and the NFL since joining the paper in 1988. He received the 2021 Bill Nunn Jr. Career Achievement Award by the Professional Football Writers of America for long and distinguished contributions to pro football through coverage. Glauber's other book, which was released in 2019, was Guts and Genius: The Story of Three Unlikely Coaches Who Came To Dominate the NFL In The '80s (click here for our review).

The Forgotten First tells the story of the four incredible men who integrated football - Kenny Washington, Woody Strode,Marion Motley, and Bill Willis - their lives, the racism they experienced as Black players entering a segregated sport, the burden of expectations they carried, and their many achievements.

The Los Angeles Rams' signing of Washington in 1946 made him the league's first African-American player and spawned the integration of the sport. Not long after Washington signed, a concerted effort by influential Los Angeles political and civic leaders led the team to sign his UCLA teammate Strode. Interesting to note is that they both were UCLA football teammates with Jackie Robinson, who broke the color barrier in baseball with the Brooklyn Dodgers the following season, 1947.

Soon after the Rams made their moves to integrate the NFL, Paul Brown and his fledgling Cleveland Browns, who were in the All-America Football Conference at the time, signed running back Marion Motley and defensive lineman Bill Willis.

It was a long wait for Washington and Strode after their college farewell for the UCLA Bruins, against the rival USC Trojans, in front of 103,000 fans at the Los Angeles Memorial Coliseum on December 9, 1939. Washington completed one of the best seasons in college football history, as he played nearly every minute of every game to lead UCLA to a 6-0-4 record and nearly beat a USC team that had more talent, swagger and history. The game ended in a 0-0 tie, which let USC get a berth in the Rose Bowl and go on to earn the national title over Tennessee. The Bruins' best chance coming on a thirteen-play drive led by Washington, who played left fullback, which gave him prime responsibility for the passing and running game, with Robinson and Strode key contributors, and which was halted by USC at the goal line.

That day, the NFL was holding its annual draft for the 1940 season, but Washington and Strode didn't hear their names called. In the 22-round draft in Milwaukee, all 200 players selected were white. Tennesse fullback George Cafego was the first selection that day, and five halfbacks, Washington's position, were among the top ten selections.

Johnson and Glauber write in this excerpt: "The Forgotten First is the largely untold story of integration in pro football, a painful chapter in the country's most popular spectator sport. It is the story of the first group of players to break the color barrier, the people who helped them get there - and the people who tried to block them.

A year before Jackie Robinson became the first African-American to play in the major leagues, Washington, Strode, Motley, and Willis helped pave the way for the players to come after. While Robinson's transformative story is an iconic piece of sports history and American culture, the first year of integration in pro football is mostly overlooked and doesn't carry nearly the same impact as Robinson's journey.

Each year on April 15, every Major League Baseball player celebrates Jackie Robinson Day by wearing his No. 42 jersey to commemorate the day he played his first game for the Brooklyn Dodgers at Ebbets Field in 1947. It was the first time a Black man had played in the big leagues in more than fifty years.

Even the most casual sports fan knows it was Robinson who broke baseball's color barrier.

Yet chances are even the most diehard football fan can't tell you the first African-American to be signed by an NFL team. It was Kenny Washington with the Los Angeles Rams on March 21, 1946, followed by his teammate Woody Strode a few weeks after that. Bill Willis was invited by Brown for a tryout with the Browns that summer, and he and Marion Motley soon made their own history by integrating the AAFC.

Washington, who played alongside Robinson in football and baseball at UCLA, made history against the wishes of the league owners, and only after public pressure was brought to bear on then-Rams owner Dan Reeves when he moved the team from Cleveland to Los Angeles.

The impact of Paul Brown's actions on integrating pro football was much more closely aligned with that of Dodgers general manager Branch Rickey in Major League Baseball in terms of intentionally bringing Willis and Motley to the Browns. It was Rickey who made the bold decision to sign Robinson to a minor league contract in 1945 that led to his Major League career two years later, even though Rickey knew there would be harsh blowbackk from fans and opposing players, and even some of Robinson's teammates. Rickey felt the combination of Robinson's talent and character would live up to the moment, as he once told Robinson he wanted a man who 'had guts enough not to fight back.'

Brown, however, was reluctant to attach the kind of racial significance that Rickey acknowledged. Even so, Willis and Motley knew the sacrifice made by their coach and the ramifications it carried, and they were grateful he would stand up for them and give them a chance. Motley and Willis would go on to produce Hall of Fame careers along with Brown, one of the most innovative coaches in sports history, who has a place in Canton alongside two of his greatest players.

'This story needs to be told over and over and over, so our young people see how all of this led them to where they are now,' said former Brown Pro Bowl guard John Wooten, the longtime executive director of the Fritz Pollard Alliance, an organization dedicated to promoting coaching and executive diversity in the NFL. 'That's the history. That history is not told enough in my opinion.'

Wooten is right. Not enough people know the story of these men, and I - Keyshawn - speak from experience.

I grew up in the same city as Kenny Washington and Woody Strode, played high school football twelve miles from Lincoln High School, where Washington was a legend. I played my USC home games at the Los Angeles Memorial Coliseum, walked off the same field one last time, just like Washington did to those roars of more than 103,000 people on that December afternoon in 1939.

But I'd never heard of Washington or Strode, never realized what Motley and Willis had to go through to blaze the trail for the players, like me and so many others, who came after them.