Books: "We Want Bama" On Possibly The Greatest College Football Team Ever 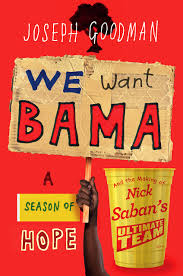 We Want Bama: A Season of Hope and the Making of Nick Saban's "Ultimate Team"

The Alabama Crimson Tide had one of their best seasons ever in 2020, as they went 13-0, punctuated by their putting up a combined 107 points against SEC powerhouses LSU and Florida, and rolling past Ohio State 52-24 in the national championship game.

This would be incredible any year, but even more so in 2020, a year marked by a pandemic and a national reckoning on race. That is all chronicled in the engrossing new book, We want Bama, by Joseph Goodman, sports columnist for the Birmingham News, Mobile Press-Register, Huntsville Times, and AL.com.

Alabama head coach Nick Saban called his 2020 championship squad, which gave him his seventh title, the "ultimate team" because, as much as they dominated on the field, it was their actions off of it that set them apart. The Crimson Tide players leveraged a power and influence born of Southern pride to push back against a hateful legacy or racism that a populist president was using to divide the nation.

The players left their training facility and, led by Saban, they marched to a campus doorway made famous by another political demagogue and showed what people can accomplish when they fight together for a just cause. They replaced former Alabama Governor George Wallace's "Segregation forever!" with a different message, written by one of the players, Alex Leatherwood, "All lives can't matter until Black lives matter."

This phrase came from an essay that became a declaration of college football players' value system to the country. It was turned into a video, in which his teammates, including quarterback Mac Jones, receiver DaVonta Smith, offensive lineman Emil Ekiyor Jr., and cornerback Patrick Surtain II participated in. Saban also gave his full support.

This provided a symbol of rebalancing of the relationship between players and their schools in college football, as Goodman writes: "In 2020, a nation witnessed a shift in the evolution of power for college football from the system to the individual, and then the Alabama football Crimson Tide took the new power and formed one of the greatest teams of all time through sacrifice for each other. And they didn't even have to play the season. And they had to stay isolated in their apartments and sit through the COVID-19 pandemic to do it. No Galettes ever, in other words."

Alabama football "isn't for everyone," as people around the team like to say, but the phrase that really caught on in 2020, hence the title of the book, is "We Want Bama." It became college football's battle cry, and "then it transformed into America's meme that represented testing yourself against the best in every walk of life," as Goodman writes.

"The maniacal pursuit of college football perfection is an American drug, and people pay thousands and thousands of dollars every year to be part of that high. In that world, there is not a more American place than Alabama. In 'Alabama the Beautiful,' it is football at all costs all of the damn time. Even during a pandemic. The best players from around the country (and one from Canada who will clean knock your teeth out) devoted their lives to one another, what they believed in, and the love of football at the University of Alabama in 2020.

"And for a maniacal coach who controls everything in his bubble, a pandemic isn't a crisis. It's an opportunity to find every advantage possible.

"It's your choice to either hate that or love it, but know that everyone in Alabama - and for that matter, everyone in the South - regardless of their political affiliation or philosophical trappings or, more important, college football team loyalty, understands the game and loves it for how unbelievably unifying it is in its craziness...

"When conferences around the country were cancelling college football in August 2020, pretty much everyone in the South understood that the game was going to be played by the schools in the SEC. The conference planned for it all along and didn't blink when the Big Ten and Pac-12 announced fall football was a wrap because of 'new research' linking the coronavirus to cardiomyopathy...

"He's worth every penny, by the way, and the reason is not because of winning so many football games, but rather the enormous wealth all that winning has brought the University of Alabama in student enrollment, alumni donations, and national clout.

"Across the country, but especially in the SEC, telling the college experience is tied directly to football. No one has done that better than the University of Alabama since it plucked Saban and Mrs. Terry away from the Miami Dolphins. The University of Alabama's student population grew from 25,580 in Saban's first year in Tuscaloosa (2007) to 38,103 in 2018. That's so much damn cornbread for a poor Southern state."

We Want Bama is one of the best books you will read on the greatest college football coach of all time and his wonderful teams, and you will also enjoy this recent releases as well:

Dabo's World: The Life and Career of Coach Swinney and the Rise of Clemson Football, by Lars Anderson (Grand Central Publishing; hardcover, 272 pages; $28.00) on the life of the two-time National Champion Clemson football head coach Dabo Swinney (click here for our review).

The Forgotten First: Kenny Washington, Woody Strode, Marion Motley, Bill Willis, and the Breaking of the NFL Color Barrier, by Keyshawn Johnson and Bob Glauber (Grand Central Publishing; hardcover, 288 pages; $28) on how the Los Angeles Rams' signing of Kenny Washington made him the league's first African-American player and spawned the integration of the sport. Not long after Washington signed, a concerted effort by influential Los Angeles political and civic leaders led the team to sign his UCLA teammate Woody Strode, and the Cleveland Browns signed running back Marion Motley and defensive lineman Bill Willis. (Click here for our review)

It's Better To Be Feared: The New England Patriots Dynasty and the Pursuit of Greatness, by Seth Wickersham (Liveright; hardcover, 528 pages; $30. (Click here for our review) Seth Wickersham, a senior writer at ESPN, has written one of the most definitive books on the successful pairing of head coach Bill Belichick and quarterback Tom Brady, as well as team owner Robert Kraft, It's Better To Be Feared. They teamed up to win a record six Super Bowl championships in their 20 years together with the Patriots before Brady bolted to the Tampa Bay Buccaneers in March 2020 and promptly won another championship with his new team. Wickersham captures this two-decade quest for glory, with Belichick and Brady's unrivaled brilliance, ambition, and ruthlessness. They both are more similar than would appear, as they both united in their shared quest to prove people wrong.

A Season in the Sun: The Inside Story of Bruce Arians, Tom Brady, and the Making of a Champion, by Lars Anderson; featuring a foreword from Coach Bruce Arians; William Morrow, hardcover, $28.99 (Click here for our review). This book documents the Tampa Bay Buccaneers' 2020 championship season, and how Tom Brady and head coach Bruce Arians built a title team. Brady was able to lure his old Patriots tight end, Rob Gronkowski, out of retirement, which was the first thing many people thought he would do when he relocated to Tampa Bay. He also convinced running back Leonard Fournette and wide receiver Antonio Brown, his brief teammate in New England in 2019, to sign on and complete a solid offense to go along with an already-established quality defense. For Brady, this was a new challenge, as he entered this season at 43 years old, playing long past what is the normal retirement age in the NFL, and he would be going it alone without New England head coach Bill Belichick by his side. Arians was also on a mission, as he came out of retirement to coach in Tampa Bay in 2018, at the age of 65, in search of the one thing he had not yet achieved, a Super Bowl championship.