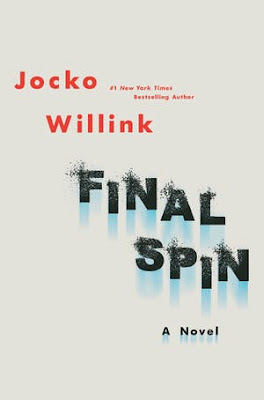 Jocko Willink was a Navy SEAL for 20 years who rose up through the ranks to command the Task Unit Bruiser, the most decorated Special Operations Unit of the Iraq War. After he retired, Willink co-founded Echelon Front, a premier leadership and management consulting company. He is author of the #1 New York Times bestsellers Extreme Ownership, Leadership Strategy and Tactics, Discipline Equals Freedom, and The Way of the Warrior Kid children's series. In addition to these wonderful works, he created and hosts the top-rated podcast, JOCKO PODCAST.

Willink has now written his debut novel, Final Spin, a fast-paced thriller that's a story of love, brotherhood, suffering, happiness, and sacrifice. It is also a story about life, told in a very unique prose, with the book presented as if it were produced on an old typewriter.

Final Spin is focused on Johnny, who shouldn't be in a dead-end job, or a dead-end bar, or a dead-end life, yet, here he is. Johnny has a hamster wheel existence, as he stocks warehouse shelves by day and drinks too much whiskey and beer at night.

Johnny fills the time between living in his childhood home, making sure his alcoholic mother hasn't drunk herself to death, and tending to his idiosyncratic older brother Arty, whose job at a laundromat dominates his existence.

It's basically rinse and repeat for Johnny, until the monotomy of his life takes a hit when the laundromat where Arty works is about to be sold. The laundromat is the one thing that gives Johnny happiness, so he takes measures into his own hands to prevent that from happening. Johnny and his friend, Goat, devise a plan to get the money to buy the laundromat, but things don't always go as planned.

In this excerpt, Willink, writing in Johnny's voice, chronicles his main character's place in life, and you will get a sense of the poetic style Final Spin is written in:

"How did I end up here? I'm smart. I'm funny. I look pretty damn handsome if I do say so myself.

But here I am.

And it seems this is where I will always be: nowhere.

It is not an apartment, but it looks

Not clean, but not

Then there is the decor. Pictures hung neatly on the walls. They are strange. Or at least indicate a strangeness that is hard to interpret. Harmless, but different.

Pretty damn handsome for an unkempt young man who stays up too late and eats the wrong foods and drinks more beer and whiskey than he should.

He looks at his brother.

He tries to remain restrained,

but it can be hard after all

'What the hell, Cleaner? Man, I told you about these shirts.' Arty looks distraught. Johnny sees. Johnny cannot stay frustrated. After all, this is Arty, his brother. And no one could really be mad at Arty.

'What? Is it not clean?' Arty replies, earnestly concerned, wondering if he has somehow failed his brother.

'I know,' Arty cuts in. 'It's a hundred-percent cotton t-shirt. I used a warm-warm cycle. It shouldn't have shrunk at all. I'm always careful about that.'

'Forget what, Johnny? What's wrong?' This is killing Arty. The one thing he was supposed to be good at. And it seems like he messed it up.

'Arty,' Johnny replies as kindly as he can, 'It's just that...it's a t-shirt. You don't press t-shirts. You don't put starch in T-shirts, buddy.'

'But the creases are sharp, aren't they?' Arty replies, wondering what on earth the problem could be.

'The creases are sharp,' Johnny concedes, 'but that's not the point. You don't put military creases in T-shirts. I've told you this before, Arty.'

'But why? Cotton holds the starch really well.'

Johnny starts to get frustrated again. He's been down this road before.