Books: "Her Name Is Knight" By Yasmin Angoe 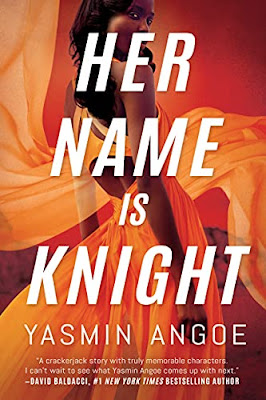 Her Name Is Knight

Yasmin Angoe is a first-generation Ghanian-American from Northern Virginia who grew up in two cultural worlds. She was a middle and high school English teacher who currently works as a freelance developmental editor. In 2020, he received the Sisters in Crime Eleanor Taylor Bland Award for Emerging Writers of Color and is a proud member of SinC, Crime Writers of Color, and International Thriller Writers.

Her Name is Knight is Angoe's thriller debut, and it draws on her African heritage and her love of family and Tribe for her groundbreaking thriller debut.

Nena Knight is an elite assassin with an unspeakable past, and she in on a mission to topple a human trafficking ring and avenge her family. She was stolen from her Ghanian village as a child, giving her plenty of motives to kill - now that she is working for a powerful business syndicate called the Tribe, she gets plenty of chances.

When she is in Miami, Nena ends up saving a life, and emerges from it a changed woman, hopeful for a life beyond rage and revenge. Tasked with killing a man she has come to respect, Nena struggles to reconcile her loyalty to the Tribe and her new purpose.

This is a character rarely seen in genre fiction, as he is a Black woman, written by a Black woman. Nena is a heroine on par with classic protagonists like Jack Reacher, Ethan Hunt, Jason Bourne, and Jack Ryan. Angoe says of that, "Ginger Rogers said, 'I did everything Fred (Astaire) did, only backwards and in high heels.' And that could apply to Nena Knight and what she's able to accomplish in my book."

Nena's story is entirely fictional, but Angoe aims to highlight human trafficking and how its horrors are closer and far more common than people could ever imagine. Angoe explains, "I also wanted to explore the idea of how people go about reclaiming power that was stolen from them. Africa has been plundered, colonized, devalued. Countless numbers of its people were enslaved. And so in my novel, the goal of the Africa Tribal Council, the powerfully clandestine organization for whom Nena works, is to unify and empower Africa to take back its power and be a force that the world recognizes as equal to them. To make One Africa."

Everyone has a Tribe. Her Name Is Knight is an homage to mine.

I am a Ghanian American. My parents came to America to attend college - my mom for business and my dad for architecture. Theirs is the story of many an immigrant. They met and had me, but my dad had to quit his education in order to support his new family. Eventually, my grandma took me to Ghana to live with her so my mom could finish school. I was in Africa for a couple of years before returning to the United States, to my parents.

I straddled between two very different worlds, deeply entrenched in my Ghanian culture, but yearning to be like my American neighbors and have Pizza Hut and mac and cheese for dinner instead of kontomire, spinach stew and rice, or peanut butter soup and fufu. I lost my native languages (ga, Twi, and Ewe - three of the many dialects spoken in Ghana). I attended the local school, made American friends, and became more and more assimilated.

It wasn't until my dad passed away in 2012 that I realized my determination to Americanize had caused me to miss out on a rich culture full of traditions, folklore such as the story of the spider Anansi, tribes of warriors and queens, beauty, color, dance, and pride. I finally understood how lucky I was to be a Ghanian, and to be the daughter of a man who was willing to sacrifice everything for his family.

To help me grieve, my mom shared stories about my dad's past. He'd come from a prominent family in Ghana, and if he'd stayed and become chief, and I'd been born there, I would have been the equivalent of a princess. I was captivated by imagining him as a chieftain and ruling a village.

My father is the root inspiration for Her Name is Knight. Nena Knight's biological and adopted fathers have a protectiveness, love, sensitivity, and fierceness for their children that my father had for me and my siblings. Nena's village and her family are a tribute to my own, and to so many African families like mine.

Her Name is Knight is a thriller, but at its core, it's a story about family (the one you're born in and the one you choose). I wanted to write about a woman who holds a deep sense of pride of her heritage, who becomes incensed when it, and everything else, is taken from her, and so she does something about it. I wanted to write about grief and loss, laid bare. About survival and oppression. About family, especially family, especially fathers and their daughters. It's an homage to my heritage, my Tribe, that I spent so many years never truly appreciating.