Books: A Tribute To Trailblazing Journalist Cokie Roberts From Her Husband, Steve Roberts

Cokie Roberts was one of the intrepid news journalists,a fixture on national television and radio for more than 40 years, known most for her work at NPR and ABC, including on the Sunday morning show This Week.

In addition to being a journalist, she was a daughter, a wife, a mother, an advocate, and a historian. In Cokie: A Life Well Lived, her husband of 53 years and bestseller co-author, Steve, captures her trailblazing life, in terms of her many accomplishments and a devotion to helping others. For Steve, Cokie's private life was as significant, and inspirational, as her professional career.

There are also reflections from those closest to her on her impressive mind, wit, infectious laugh, and the tenacity that sent her career skyrocketing. She started in local news, at WNEW channel 5 in New York before a stint at CBS News as a foreign correspondent. Cokie joined NPR in 1978, where she joined up with Nina Totenberg and Linda Wertheimer, and they were dubbed "the Three Musketeers" Nina and Linda led the way before Cokie added to what they built, and they all flourished because NPR featured women more than the other broadcast networks.

Cokie was originally hired by the legendary ABC executive Roone Arledge, who ran the news division and Monday Night Football, to appear on This Week in 1987. Up until that point, it was anchored by David Brinkley, George Will, and Sam Donaldson. She was such a hit that she became the co-host with Donaldson in 1996, and and stayed on the show until 2002. She was 58 years old at the time, and it was the same year she was diagnosed with breast cancer, which only reinforced her decision to move on from the Sunday show. Soon after, Cokie joined the board of Save the Children, the worldwide relief organization, the start of her rewarding work as an advocate.

A question still asked by many when they have daily decisions and dilemmas is, "What Would Cokie Do?" She was committed to celebrating and supporting other women, which was evident in everything she did, and her generosity and passion drove personal and professional endeavors.

In this excerpt, Steven V. Roberts writes of his wife: "Cokie died on September 17, 2019, a week after we celebrated out 53rd wedding anniversary. When I gave a eulogy at her funeral in the Cathedral of St. Matthew the Apostle in downtown Washington, my aim was simply to tell stories - some funny, some poignant, all personal- to illustrate her truly remarkable life. There were a thousand mourners in the church that morning, but countless others heard the ceremony on TV, and the reactions I received were overwhelming. People were hungry for more stories about her - her origins and her impact, her generosity and her goodness. So that's why I decided to write this book.

Cokie lived much of her life in public, by the accident of her birth and the choice of her career. Her parents, Hale and Lindy Boggs, both served in Congress, representing the city of New Orleans for a total of fifty years. The Speaker of the House, Sam Rayburn, was a frequent dinner guest during her childhood in the 1950s (in the home I still live in), and President and Mrs. Johnson came to our wedding in 1966 (in the garden of that home). Many obituaries referred to her as the ultimate 'Washington insider,' even as 'Washington royalty.' but her professional success flowed from her own tenacity and talent, not family connections. She wasn't a full-time journalist until she was thirty-four years old, but she made up for lost time, crashing through glass ceilings at NPR and ABC with her impressive mind, impish wit, and infectious laugh. 'The laugh, wrote Lear's magazine, 'distinguishes her from the self-important chin-tuggers of her trade, makes her someone people connect with.' She loved hearing fro young women who had followed her on the radio or watched her on TV or heard her at their school and said to themselves, 'I can be Cokie Roberts. I can be that smart, that confident, that powerful.' Diane Sawyer, a colleague at ABC and a fellow graduate at Wellesley, once said, 'She made you brave.'

In another way, however, she wasn't royalty at all. She was accessible and approachable,' a 'suburban housewife,' as she often called herself, or an 'everywoman,' as she told Lear's: 'People think I'm sort of sensible and like them and go to the grocery tore and worry about tuition.' But every woman didn't have her propensity for puncturing pomposity - especially if it came from a man, as it usually did. Me included. 'Her ability to call foul on something that didn't make sense, it just endeared her to people,' said ABC executive Bob Murphy. David Westin, who headed ABC News during much of Cokie's tenure there, put it this way: 'She was just Cokie. She knew the stuff, she knew the material, she knew it better than everyone else. And she would tell you what she knew. But she also had, and it sounds lofty, a moral compass to her about right and wrong that she brought to her reporting that stopped short of moralizing.' George Will, who shared ABC's Sunday-morning program with her for many years, mentioned Roone Arledge, who preceded Westin as head of ABC News and originally hired Cokie: 'Roone had this genius for understanding what felt good to viewers. And Cokie felt good. She just brought an ease and confidence and comfortableness. One of the things Roone understood was that television has you in strangers' living rooms. So you better not make them uneasy. And Cokie was a good guest in a stanger's living room.'

Then in midlife she became a storyteller, publishing her first book at age fifty-four: We Are Our Mothers' Daughters, which reached number one on the New York Times bestseller list. Four other bestsellers followed (five if you include a children's version of one history book), all of which focused on researching and resurrecting the contributions women have always made to American history, while seldom getting the recognition they deserve. As Catherine Allgor, head of the Massachusetts Historical Society, told me, 'The biggest thing that she did was let Americans know there was a history out there they weren't aware of. That just made a huge difference.'" 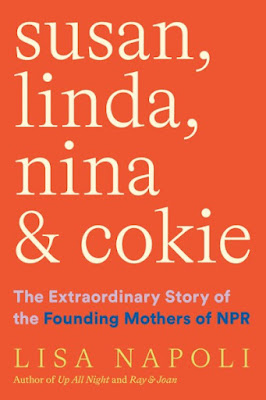 Another remarkable book about Cokie Roberts that was released earlier this year is, Susan, Linda, Nina & Cokie: The Extraordinary Story of the Founding Mothers of NPR by Lisa Napoli (Abrams Press; hardcover, 352 pages; $28.00).

Cokie Roberts was one of four beloved women, along with Susan Stamberg, Linda Wertheimer, and Nina Totenberg, who made National Public Radio into one of the best news brands in the country.

When the pioneering nonprofit came along in the 1970s, it opened a door to serious journalism, and they blew it wide open. These four women, who had deep and enduring friendships, blazed a trail to becoming icons.

This was in an era in which the news business was still a backwater of male chauvinism where a woman might be lucky to get a foothold on the "women's pages." Overall, women in the workplace were still relegated to secretarial positions or entirely locked out of jobs, so to see women so prominently covering news was quite a statement.

Lisa Napoli documents their remarkable lives, and how different these four women were. Cokie Roberts was born into a political dynasty, and felt the tug of public service after roaming the halls of Congress as a child. Susan Stamberg lived in India with her husband who worked for the State Department. She was the first woman to anchor a nightly news program, and pressed for accommodations to balance her work and home life. Linda Wertheimer was the daughter of shopkeepers in New Mexico and she fought her way to a scholarship and a spot on the air. Nina Totenberg was the network's legal affairs correspondent who invented a new way to cover the Supreme Court.

Napoli, a Brooklyn native who had a long career in print, radio, and TV, working at the New York Times and MSNBC among other places, tells this story through extensive interviews and using her vast connections in news and public radio. It is an insider's account about four women who became the ultimate insiders at a time when they were largely kept out.