Books: "Answers In The Form Of Questions" On Jeopardy! 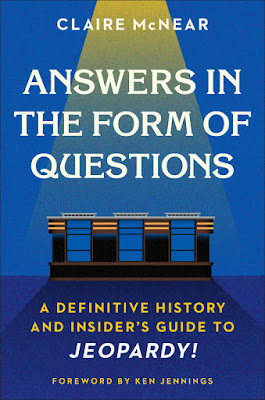 Answers In The Form Of Questions: A Definitive History and Insider's Guide to JEOPARDY!

Claire McNear is a sports and culture columnist for The Ringer, where she has covered very diverse things from a Property Brothers cruise to the Washington Nationals' 2019 World Series run. Like many people, she was brought up watching Jeopardy! every night, and she started this book, as well as her regular column on the show for The Ringer, to attempt to realize her lifelong quest of shouting out the answers before her parents.

In the entertaining new book, Answers In The Form Of Questions: A Definitive History and Insider's Guide to JEOPARDY!, McNear examines the training, which sometimes can take years, that goes on before each contestant has taken a step onto the show's iconic stage.

"I've found that Jeopardy! is a sport - one with a prospect pipeline, coaches, training boot camps, a hall of fame, and more, and by the time a contestant makes it to the Jeopardy! stage, the odds are good that they've been working toward it for years," McNear says. "The show now finds itself in a rare moment of transition, and I'm so excited to take readers behind the scenes to see who and what has made it the institution that it is."

Jeopardy! has been on the air, in some form, for nearly 50 years, and with Alex Trebek as host since 1984 until his untimely passing this fall, became a cultural touchstone. The acclaimed Trebek hosted over 8,000 episodes and a record 38 Daytime Emmy Awards.

Ken Jennings, who was one of the greatest players of all-time on the show, has been guest-hosting since early January, and he writes the introduction to this book.

"Jeopardy! is a magic trick," Jennings writes. "It's been performed over eight thousand times, every weeknight for the last three and a half decades. But the trick goes off so smoothly every time that you never see the strings. You're probably not even aware that you're watching magic. The show appears simple, effortless - even mundane, at this point...But at home, you're seeing only a tiny part of the trick. It takes months of complicated preparation and a small army of people to produce a single half hour of Jeopardy! A lot of hard work goes into making television look this easy."

McNear immersed herself in the world of trivia fanatics who spend years training for their chance to compete, drilling themselves on Norse mythology and isotopes and rigging homemade buzzers to perfect the art of ringing in.

Notable Jeopardy! champions, including Jennings, James Holshauer, and Buzzy Cohen will appear to explain their strategies, such as: when to hunt for Daily Doubles or bet it all, and what makes a "good" Final Jeopardy wager. The people that make the show possible, including the writers and producers, help break down what the show looks for in aspiring contestants.

Readers will be a fly on the wall, from the early-morning clue assembly in Jeopardy!'s famous library to the moment contestant stumble out of the studio with their winnings.

There are fun tidbits too, such as: without Weird Al Yankovic's melancholic ode "I lost on Jeopardy," Jeopardy! might not exist today; Alex Trebek became famous for hosting this show, but he also hosted Wheel of Fortune, Classic Concentration, The Wizard of Odd, and To Tell the Truth?, and that Jennings and Holzhauer are tied for the ten highest Coryat scores in Jeopardy! history.

If you spent each night shouting the answers at the screen and figuring out the Final Jeopardy question while the iconic "Think" music plays, Answers In The Form Of Questions is the book for you and will make you appreciate the show as it carries on into a new era.