Baseball Books: "Escape From Castro's Cuba" & "The Best Team Over There"

Baseball season is upon us, making it a good time to read up on the history of the game, its most compelling personalities, or stories about the sport's effect on the world. Two new books fit the bill, Escape From Castro's Cuba: A Novel by Tim Wendel, and The Best Team Over There: The Untold Story of Grover Cleveland Alexander and the Great War by Jim Leeke. 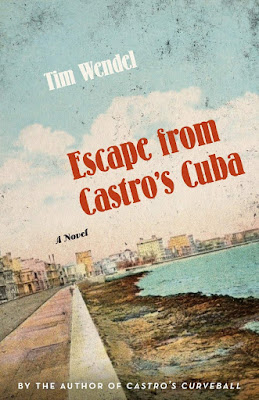 Escape From Castro's Cuba: A Novel

Tim Wendel is the author of fourteen books, including Castro's Curveball (Bison Books, 2006) and Summer of '68: The Season That Changed Baseball - and America - Forever. He is a founding editor of USA Today Baseball Weekly and a writer in residence at Johns Hopkins University. His work has also appeared in the New York Times, the Washington Post, National Geographic, Psychology Today, and Esquire.

In Escape From Castro's Cuba, the gripping read that's a visionary sequel to Castro's Curveball, we find that Billy Bryan, the former Washington Senators Minor League catcher, has returned to Havana with a small role in a movie being filmed on location. It doesn't take him long to realize that this place and his past remain as star-crossed as when he played winter winter ball in the Cuban capital decades before.

Billy, going against his better judgment, becomes entangled in a scheme to spirit a top baseball prospect off the island, which leads him to be adversaries with his old friend Fidel Castro. Despite being in his final days, the dictator remains a dangerous foe, as does the Cuban sports machine and the Mexican crime syndicates that now direct baseball talent toward the Major Leagues in the United States.

Once again, Billy has to navigate the crosscurrents of the so-called City of Columns, where the sunsets from the Hotel Nacional along the Malecon breakwater are as beautiful as ever, but where the alleyways in Old Havana still fan out, crooked and broken, like an old catcher's fingers. 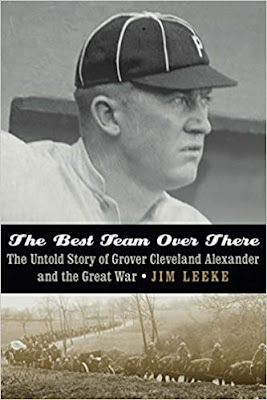 The Best Team Over There: The Untold Story of Grover Cleveland Alexander and the Great War

Grover Cleveland Alexander is known as one of the greatest pitchers of all time, with 373 victories in twenty seasons, and in the new book, The Best Team Over There, Jim Leeke tells the story of his service in World War I.

This part of "Pete" Alexander's story is largely forgotten, even though his military service is the demarcation point between his great seasons with the Philadelphia Phillies and his years of struggle and turmoil with the Chicago Cubs and St. Louis Cardinals.

Alexander served in the 342nd Field Artillery Regiment, which included plenty of athletes and major leaguers in their ranks. Naturally, it fielded a great baseball team, but it also faced hard service during the final weeks of the war. After the November 1918 armistice, the unit undertook occupation duty in Germany.

Leeke, who is a retired copywriter and creative director, and also served in the United States Army, examines this crucial period closely, and how it dramatically changed Alexander's life. There is a detailed look at where Alexander was stationed, how he was trained, how he withstood the effects of combat and shelling, how he interacted with his fellow athletes and soldiers, and how the war changed his baseball career.

In this excerpt, Leeke writes about Alexander's Army unit: "The 342nd Field Artillery (FA) distributed its athletes throughout the six batteries and headquarters company. Pvt. Pete Alexander's new home was Battery F, in which Potsy Clark and Jick Fast were lieutenants. Their battery commander was Capt. John J. O'Fallon of St. Louis, considered by some 'the best captain in the whole reservation.' Alexander had been in the army only about long enough to know how to speak the lingo, pack his barracks bag, and march in step to the depot. He already understood teamwork. He would pick up a soldier's other skills across the water in France.

Many of his half-trained comrades were eager to go. 'The boys are all anxious to go to France, England or even right into Germany just to get away from this place for this is one of the hottest, coldest, and also the dryest places I have ever been in," T.B. Thompson of Battery E wrote home. The Missourian added, 'I heard a man say the other day that we boys were all 'Jewelers.' I asked him why, and this was his answer: 'Because you are going to put a new set of works in the 'watch on the Reine.' Other doughboys in the regiment echoed the sentiment. One lieutenant canceled a subscription to his hometown newspaper by writing, 'I am going to Berlin for the summer.'

The French would reequip the batteries overseas, so the 164th Fueld Artillery Brigade left all its guns and horses at Camp Funston. The three regiments left the cantonment separately.  The 340th FA and 341st FA departed on June 2. The 342nd FA left the next day, a Monday. With 75 officers and 1,336 enlisted men the regiment was somewhat understrength, having sent about a hundred men a month to replacement detachments since January. Heeding the ancient military axiom to hurry up and wait, Alexander and his barracks mates rose from their bunks at three o'clock in the morning, then didn't board at the depot until afternoon...

Unlike many of the young Missourians around him Alexander had traveled extensively by rail before entering the army. He had traversed the Northeast and the Midwest with the Phillies and gone to California for spring training with the Cubs. Alexander had even gone to sea while barnstorming to Hawaii in 1914. A crowded troop train wasn't the Major Leaguer's usual mode of transport. Walter Maranville could have told him about travel in the armed forces; the Braves' quick little shortstop was not serving on a navy battleship. 'The Rabbit has been across to the other side as convoy to transports twice,' The Sporting News reported, 'and says it's [a] great life and that he thinks it would do some ball players who kick on Pullman berths and $5 a day hotels good if they would take a swing at it.'

The army rushed troops to the Atlantic embarkation ports from cantonments all over the country. The Germans had launched a series of dangerous spring offensives and could still win the war. Over half a million doughboys headed for the seaports during June alone. Their journeys were long, tedious, and meticulously planned. 'What road the train would traverse from a junction point on through the next stage of its journey was not left to chance or to the state of traffic,' a World War I history records. 'Every arrangement has been made in advance for the progress of that train from point of origin to terminal.'

Alexander's regiment attracted a good deal of comment once the coaches had rattled through a city or town. 'Grover Cleveland Alexander, the famous pitcher, now a member of Battery F, 342d Field Artillery, 89th Division, passed through St. Louis last night on his way from Camp Funston to an eastern camp,' The St. Louis Star reported."