This is President's Week, a good time for a midwinter's break, and there are three new novels out Tuesday that are perfect to curl up with: Black Coral, by Andrew Mayne; A Fatal Lie by Charles Todd; and Missing And Endangered, by J.A. Jance. 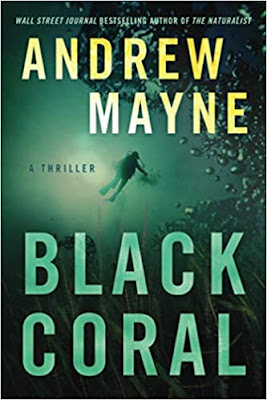 Andrew Mayne is an Edgar-nominated author, Thriller award finalist, star of Shark Week, and A&E Television's Don't Trust Andrew Mayne, where he has performed his unique brand of magic on five continents. He's the author of more than a dozen thrillers, works of science fiction, and books on writing. Mayne's novel, The Naturalist, was an Amazon Charts bestseller and spent six weeks as the top book on Amazon.

Mayne's new novel is Black Coral, the suspenseful follow up to his hit thriller, The Girl Beneath the Sea, and the stakes are raised for Sloan McPherson and her Underwater Investigation Unit. They have discovered a van at the bottom of a murky Florida pond, and sealed in this watery tomb are the bodies of four teenagers who disappeared thirty years ago after leaving a rock concert.

Authorities at the time thought it was just an accident, but to Sloan, thinks seems like it was murder. Every piece of evidence they collect looks like the link to a string of cold case vanishings throughout Florida. Clue by clue, Sloan navigates the warm, dark waters where natural predators feed, knowing that the most dangerous one is still above the surface, natural and dormant.

When a fresh young kill is found in the Everglades, Sloan fears that her investigation has reawakened a monster. How will she be able to catch someone who's a genius at hiding in plain sight? By acting as prey, and the dangerous gambit might be working a bit too well. She's being lured into a deception of the madman's own design, and the question is who is setting the trap, Sloan or the serial killer? 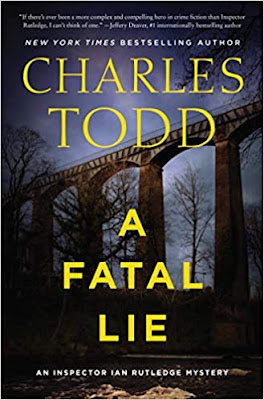 Charles Todd is the New York Times bestselling author of the Inspector Ian Rutledge mysteries, the Bess Crawford mysteries, and two stand-alone novels. A mother-and-son writing team, they live on the East Coast.

The latest installment of their series on Rutledge is the suspenseful A Fatal Lie, in which we see a peaceful Welsh village thrown into turmoil when an unidentified body washes ashore. The man fell from a great height, possibly from the aqueducts over the river, but it wasn't the fall that killed him.

Inspector Rutledge is called in from London to investigate, but the clues the the man't identity don't give him much to go on. What he does have - a small faded military tattoo on the man's arm and an unusual clothing label in his jacket - leads him to dicover the man's name, Sam Milton.

It's still not clear how Milton died and who could have wanted him dead, but the more Rutledge digs into the deceased man's life, the more mysteries emerge. There's a woman's suicide and a child's tragic disappearance, which proves that while Milton was a good man, there were plenty of dark secrets.

To prevent more lives from being lost, Rutledge must retrace Milton's steps. The truth could change everything, but the only certain thing is that, at the end of the road, a killer is waiting. 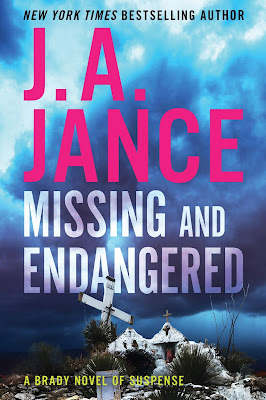 Missing and Endangered: A Brady Novel of Suspense

J.A. Jance is the New York Times bestselling author of the J.P. Beaumont Series, the Joanna Brady series, the Ali Reynolds series, five interrelated thrillers about the Walker Family, and one volume of poetry. Born in South Dakota, she grew up in Bisbee, Arizona, and now lives in Seattle with her husband.

Missing and Endangered is the latest installment of the Joanna Brady series, and in this atmospheric mystery, we find that the Cochise County Sheriff's professional and personal lives collide when her college-age daughter is involved in a missing persons case.

When Jennifer Brady returns to Northern Arizona University for her sophomore year, she turns into a big sister to her new roommate, Beth Rankin, a brilliant but sheltered 16-year-old girl. Beth had been homeschooled, so college is her first taste of unfettered freedom, and Jenny is concerned that she is both too naive and a rebel.

Jenny's worries are justified, and one day Beth vanishes, which prompts Jenny to alert campus authorities, local police, and her mom, Sheriff Joanna Brady, who quickly calls in a favor.

Beth is found, but Jenny's concern has put her directly in the sights of a criminal bent on revenge. As Christmas vacation approaches, Jenny invites Beth, who is also squabbling with her parents, to the Brady home.

Joanna is certainly sympathetic to Beth's plight, but she also is caught up in a sensitive case, an officer-involved shooting that has placed the lives of two children in jeopardy. This has left her stretched thin to hunt for a fragile young woman who has recently gone missing and is in danger.