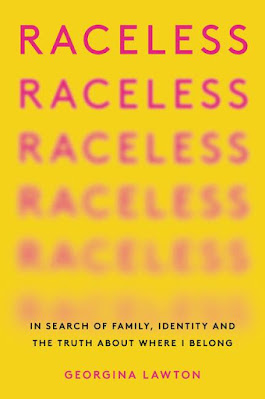 Georgina Lawton is a journalist, speaker, and writer, whose work has appeared in VICE, Marie Claire, Refinery29, Bustle, The Times, Stylist, and Time Out, and was previously a columnist for The Guardian.

In the new memoir Raceless, Lawton goes on a journey of self-discovery, looking at her path marked by secrets and stereotypes, having been raised by white parents with no explanation as to why she looked back, to examine how racial identity is constructed.

Lawton was raised in a sleepy English town, and was no stranger to homogeneity. Her parents and friends were white, and she had no reason to think she was any different - until she became a target of prejudice as she grew up due to her brown skin and unique hair.

In a household that was insistently color-blind, with no acknowledgment of her difference or access to black culture, she lacked the coordinates to make sense of who she was. The cruelty she experienced, mixed with her family's inability to recognize her racial identity, instilled a curiosity in Georgina that needed to follow.

After her father's death and propelled to action by her grief, Lawton decided to unravel the truth about her parentage and the racial identity her family long denied her. She went to live in black communities around the world, heading to the United States, the Dominican Republic, Nicaragua, Cuba, South Africa, and Morocco. It was in these countries that she was able to explore her identity and learn what it meant to navigate the world as a black woman.

Drawing on her personal experiences, the stories of others, and speaking with psychologists, sociologists, experts in genetic testing, and other individuals whose racial identity have been fraught or questioned, Lawton began to understand how we identify ourselves. It is an exploration of the fundamental question: what constitutes our sense of self?

Lawton spent time in New York City, renting an Airbnb in Crown Heights in the summer of 2016, and she writes of her experience: "I spent six months squeezing every last drop of juice from New York City and loved it. I marveled at the dizzying sense of opportunity everywhere I went and how I could step into a whole other country simply by crossing the road: entire neighborhoods separated for Italians, Russians, Jamaicans, Hasidic Jews. My stomach could travel the world in global cuisines without ever leaving Brooklyn. Both London and New York share a fascinating energy brought about by a fusion of cultures, but whereas London sometimes feels reluctant to to embrace the melange, New York would simply fall apart without it. Or is it simply that London is not defined by the physical boundaries of racial separation, and is a city that therefor is less bothered by it? At that time though, I needed to be bothered by race, I craved conversation around its meaning in relation to who I was. One thing I knew for sure was the difference in humor, in day-to-day interactions, was palpable. My city was sardonic and introverted, but New Yorkers were unashamedly brash and quick-witted - and they actually talked to each other. Subway cars weren't semi-silent spaces of stilted interaction like the London Tube; asking for directions, chastising someone for stepping on your foot, or discussing the far-too regular subway diversions and cancellations didn't result in the same look of repulsion as it would back home, as if you'd just sneezed in someone's face instead of uttering a few words before 10 a.m. If New York is the center of the world, then the subway is surely the center of the center; the urban nucleus which fizzes and whirs with the eclectic energy of the people conducting their lives within its cars. As an extroverted English girl who wasn't used to spending so many days by herself, I loved the random interactions that took place there, finding that they added a bit of color to my days. My accent also acted as an invitation to conversation, which, if I'm honest, I loved. Uber drivers would bestow on me their business card 'in case I needed anything,' free margaritas would appear on counters in rooftop bars - 'Welcome to New York!' - women on their lunch break would tell me their life story after I had asked for directions, teenagers would tell me they liked my hair, and I'd find myself invited to parties, art exhibitions, and theater shows by the people I'd just met. New Yorkers are masters of self-promotion and I marveled at the way people defined themselves by the career they wanted to have, not the one they were currently working in; bartenders were musicians, taxi drivers were actually in real estate, and, inspired by the casual self-assurance, I too began introducing myself to others as a 'lifestyle journalist' instead of the intern-cum-remote-writer that I actually was."