Books: "Your Story, My Story" By Connie Palmen 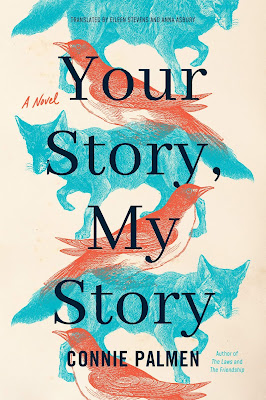 Your Story, My Story: A Novel

Connie Palmen was born in Sint Odilienberg, the Netherlands, and studied literature and philosophy at the University of Amsterdam. The Laws was her debut novel, which was voted European Novel of the Year and was short-listed for the 1996 International IMPAC Dublin Literary Award. In 2019, Vienna, Austria chose it for their "One City. One Book." campaign. She is also the author of The Friendship, which won the AKO Literature Prize, Lucifer, and an autobiographical novel, I.M.

Palmen has built her acclaimed career on writing deeply personal novels that explore the sometimes devastating effect of gossip and biographical storytelling on the lives of her characters. While mourning the loss of her husband, she read Birthday Letters by Ted Hughes, which was published just before his death. She was struck by how poignant and heartfelt the poems were, and felt that they pointed to Hughes' deep love for his wife, Sylvia Plath, and the pain he endured as a result of her death.

It was a pain that Palmen could also relate to, and the more she delved into Hughes' poetry, the more compelled she felt to tell Ted's side of the story. She did just that in the newly-translated novel, Your Story, My Story, where she describes the thoughts, fears, and incantations of this husband, and his deeply tragic bond with the woman who would come to define his life.

In 1963, Sylvia Plath took her own life in her London flat, the culmination of a brief, brilliant life lived in the shadow of clinical depression, a condition that was exacerbated by her tempestuous relationship with Hughes. The ensuing years saw Plath rise to martyr status while Hughes was cast as the cause of her suicide, his infidelity at the heart of her demise. For decades, Hughes never bore witness to the truth of their marriage, which was buried beneath a mudslide of apocryphal stories, gossip, sensationalism, and myth.

Until now, that is, as Palmen's brutal and lyrical confessional paints an indelible portrait of their seven-year relationship, the soaring highs and profound lows of star-crossed soul mates bedeviled by their personal demons. It will forever change the way we think about these two literary icons.

Your Story, My Story is told in Hughes' voice, with Palmen writing here of how he viewed Sylvia: "Hidden behind a facade of crushing cheerfulness was a shy hare with a soul of glass, a child full of fears, nightmarish amputations, imprisonments, electrocutions. And I  - the amorous shaman - adored that fragile, wounded girl, her real self, and wanted to do what a lover's devotion requires: shatter her mask like a tender iconoclast. Because I loved her, it was up to me to rip her out of her shell of falseness - both as a woman and as a writer - to enable her to maker her voice heard. The frightened voice, the angry voice, the maudlin voice with which she whined about trivialities, the muted voice she used to torment and humiliate, the forbidden voice like a raging fury she used to ostracize everyone who had wounded her. Her tongue of stone needed to be able to dance on the meter of her soul, that black soul of which she was justly frightened. It was up to me to raise her from that death.

"What I didn't understand then was that I was also liberating myself.

"Her madness is my madness."