Books: "Dark Towers" On The Saga Of Donald Trump and Deutsche Bank 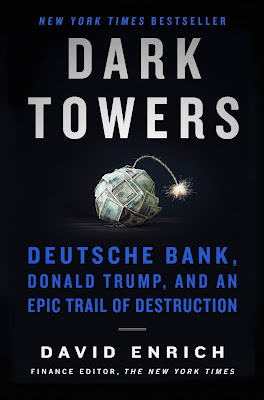 David Enrich has been consistently breaking news about Deutsche Bank in his role as Finance Editor of the New York Times, and now he shares the full, riveting story of the world's most infamous bank and its shadowy connections to Donald Trump's business empire.

Deutsche Bank became the global face of financial recklessness and criminality, and their story became intertwined with Trump, who was a New York real estate mogul before becoming president - his businesses, his bankruptcies, his relationship with Russia, and his unlikely ascent to the presidency.

Deutsche Bank's extraordinary saga goes far beyond Trump, encompassing an entire era of excess, corruption, and illegality on Wall Street. It is a story told in part through the rise and tragic fall of Bill Broeksmit, a top Deutsche executive who killed himself in 2014, and his son's quest to hold the bank accountable after his death.

Enrich starts his tale of Deutsche Bank's history from its propping up of a default-prone American developer in the 1880s, bankrolling the Nazis during World War II - which included the construction of
Auschwitz - and wooing Eastern Bloc authoritarians. Then, in the 1990s, a succession of hard-charging Deutsche executives made a fateful decision to pursue Wall Street riches, often at the expense of ethics and the law.

The one country they did not have a foothold in was the United States, and they found their savior in a self-promoting real estate magnate nearly every other bank in the world deemed too dangerous to touch: Donald J. Trump.

Over the next twenty years, Deutsche executives loaned billions to Trump, the Kushner family (yes, the family of Jared Kushner, who married Trump's daughter, Ivanka), and an array of scandal-tarred clients, including convicted sex offender Jeffrey Epstein.

Enrich writes, "For its first twelve decades, Deutsche Bank had been little more than a lender to German and other European companies and, more widely, a funder of infrastructure and development projects. But these activities weren't very lucrative, and starting in the late 1980s, this proud national icon was seduced by the siren song of Wall Street riches. A crew of Americans - led by a charismatic salesman named Edson Mitchell and his sidekick and best friend, Bill Broeksmit - would arrive to give Deutsche a dramatic makeover. Before long, it was competing alongside hard-charging U.S. investment banks, trading stocks and bonds and peddling complex financial products of all shapes and sizes. English replaced German as Deutsche's official language. The focus of power shifted from Frankfurt and Berlin to London and New York. To the chagrin of the German industrialists, bankers, union leaders, and politicos who had long called the shots, American investment bankers and traders increasingly dominated the bank's upper ranks. High-risk trading became an end unto itself, rather than a means to serve clients.

"This new strategy worked well - until it didn't. Deutsche's investment bankers and traders cranked out one record-breaking year after another, and soon the Wall Street division was responsible for most of Deutsche's revenue and profits. Executives and rank-and-file bankers got rich. So did shareholders.

"But it was an ascent fueled by greed, sloppiness, hubris, and criminality, and when the reckoning came, it was brutal. Deutsche's risk-taking - the product of years of make-money-at-all-costs mismanagement - was out of control. Painful financial decision had been punted far down the road. Its computer systems didn't talk to each other.  Neither did its German and American executives. Managers were incentivized to shirk responsibilities. Different subsidiaries competed against each other for business. Even by the amoral standards of Wall Street, Deutsche exhibited a jarring lack of interest in its' client reputations...

"This is the story of Deutsche Bank's rise and fall. It is about the men who transformed a sleepy German lender into what was, for a time, the largest bank in the world, but who also set the stage for the ensuing catastrophe. It is about one well-intentioned and honest man who tried to save the bank but couldn't save himself, and about his son, who embarked on a quest to understand his father's demise. And it is about the consequences - dead people, doomed companies, broken economies, and the forty-fifth president of the United States - that Deutsche Bank wrought on the world."

Enrich reveals the following about the bank's relationship with Trump: the creation of special purpose vehicles for Trump to secretly purchase or invest in real estate outside the U.S., including in Eastern Europe; matchmaking services in which Deutsche Bank helped line up buyers - including wealthy, well-connected Russians - for Trump-branded condos; a previously undisclosed $500 million loan request in the early 2000s that senior bank executives ultimately rejected because of Trump's reputation; and repeated efforts by senior Deutsche Bank executives to end or curtail the relationship with Trump due to concerns about his links to organized crime and the possibility of money laundering.

There is also a look into what has happened inside and outside the bank since Trump became president, including these revelations: Trump's personal banker, Rosemary Vrablic, was so worried about being scapegoated for the relationship that she printed our confidential bank documents and stashed them in her penthouse; the man who initiated the bank's Trump relationship in 1998 provided Trump campaign advice in 2016; and extensive new details about Justin Kennedy's role as a banker to Trump and as a vehicle to help coax his father to retire from the Supreme Court.
This book was originally released last year ahead of the Supreme Court case on whether the bank must hand over its extensive Trump files to congressional investigators, and by extension, the public. The former president won that case when the Supreme Court chose to send it back to the lower courts that had ruled on it.
Enrich writes a new afterword covering this and other developments on former President Trump's finances, and asks these questions which still remain unanswered, "Was Trump dodging taxes? Was he in hock to or in business with the Russians who helped him win the White House? Had he misled Deutsche about the value of his assets? Were he or his company or his family using their Deutsche accounts to launder money or for other illicit purchases? Was he using the presidency to enrich himself? The answers to those questions - and countless others, many of them hard to even articulate given the paucity of detailed information about Trump's finances - will remain locked inside Deutsche Bank's electronic vaults foe the foreseeable future.
"Unless of course, someone with access to the records decides the time has come to share them. Look me up. My contact information is easy to find online."