Books: "The Women's History Of The Modern World" By Rosalind Miles 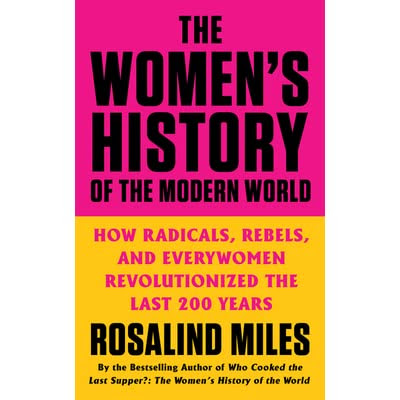 The Women's History Of The Modern World

Rosalind Miles, Ph.D., is a critically acclaimed English novelist, essayist, lecturer, and BBC broadcaster. She is the founder of the Center for Women's Studies at Coventry Polytechnic in England. Miles is the author of Who Cooked the Last Supper? The Women's History of the World, and this book is, in essence, a follow-up to that illuminating work.

This is a major moment for women, as Kamala Harris just become the first female Vice President in American history, and another women, Amy Coney Barrett, was recently appointed to the Supreme Court, along with record numbers of women serving in Congress and as governors across the country.

The Women's History Of The Modern World tells the story of the women who paved the way, going back to the French Revolution and political milestones up to the present day, including the #MeToo movement. It is told in a witty, unique way that makes for an interesting read.

Miles dives deep into a number of prominent female figures, from heads of state and political figures to STEM powerhouses and writers and intellectuals. She covers many women who are "firsts" in their own right and highlights their contributions in a humorous, yet informative approach.

In this part, Miles writes this about Eleanor Roosevelt in a section titled, "What does a first lady do?" - "First ladies before Eleanor had been ornamental rather than useful, but she created for herself something to do, not just something to be. Her activities were all female-centered, from the League of Women Voters and the Women's Trade Union League to the National Consumer League, overseeing the products women used in the home. As first lady, she rewrote the protocol, transforming the role from that of a nonspeaking consort, fashion plate, and political nonentity into that of a vibrant communicator and opinion leader on matters great and small.

"From the first her approach was logical and professional. Ideas had to be supported by facts, aims prioritized, and work organized for results to flow through. And work Eleanor did, as she had done since her husband lost the use of his legs at the age of thirty-nine after an attack of polio in 1921. Franklin's paralysis was airbrushed from any record at the time, for fear that the public knowledge of his disability would spell death at the polls. From then on, Eleanor had to handle the cover-up while acting as his legs, his eyes, and his ears, often standing in for him at events where his inability to walk or to move at all unaided could not be concealed.

"But Eleanor had her own agenda too. During her twelve years in the White House, she displayed both the rigor of her early intellectual training and an appetite amounting to a gift for the nuts and bolts of politics, the dry-as-dust workings of the government machine. Day by day, she read the Congressional Record, studied committee reports, reviewed the drafts of future legislation, spoke at public meetings, and met with congressmen and senators to take the prevailing temperature on Capitol Hill. Night after night, she made her own digests and analyses of what she gathered, assessed the progress of projects in hand, and devised strategies and tactics for the next stage."