Book Chat: With Theo Gangi, Co-Author Of "Kingston and the Magician's Lost and Found" 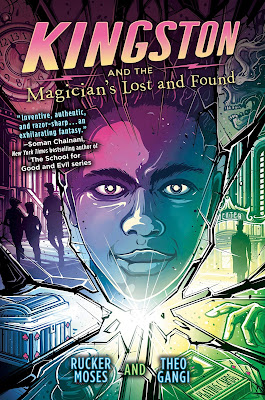 Kingston and the Magician's Lost and Found

By Rucker Moses and Theo Gangi

Theo Gangi is a novelist, and writing teacher based in Brooklyn, where he lives with his wife, young son, and their dog. He directs the MFA program at St. Francis College. He has written several acclaimed novels and short stories, and worked on shows for Netflix.

His co-author on Kingston and the Magician's Lost and Found, Rucker Moses, is the pen name for the combined creative talents of Harold Hayes, Jr., and Craig S. Phillips. They grew up in Atlanta and met at the University of Georgia at Athens. They chose Rucker Moses as their pen name in homage to one of the greatest real-life Black magicians of the early 20th century, Benjamin Rucker, who was more famously known as Black Herman.

The series begins just as Kingston James and his mother move back to the fictional Echo City neighborhood in Brooklyn, where his father was last seen alive four years ago. Kingston's dad was King Preston, one of the world's greatest stage magicians. During the performance of one of his illusions, the trick went disastrously wrong, and King vanished through a shattered mirror. At the same time, the joy in magic that infused the neighborhood faded, leaving Echo City a shadow of what it was.

Now that Kingston is back in town, he is determined to solve the case of what happened to his father, and he calls on his cousin Veronica and childhood friend Too Tall Eddie to help him. When Kingston finds a magic box that his father left behind, he is certain it's a major clue to his whereabouts. His detective work leads him to realize his won magical powers and discover there are dark forces at work. In his determination to save his father, Kingston learns that the most powerful magic is the love and loyalty of his family and friends. The next part of the series is set to come out in the fall.

I recently chatted with Theo Gangi, and here is some of our conversation:

Jason Schott: Please tell me about your book.

Theo Gangi: It is a story about Kingston James, whose father was a famous magician in a fictional neighborhood in Brooklyn called Echo City. Kingston's father disappeared in a magic trick, and at the start of the book, Kingston is returning to Echo City in hopes of figuring out what happened to his dad. It's a kind of magical mystery, urban fantasy story where there's a kind of mystery about his dad's disappearance that unfolds as to doppelgangers, alternate dimensions, lots of magic, and a lot of fun and heart. It was a lot of fun to write, a good family story.

JS: Did you grow up in Brooklyn and, for any Brooklyn kids picking up the book, is there a neighborhood that Echo City resembles?

TG: I grew in Manhattan, my dad's a Brooklynite, and I came back here about 15, 16 years ago,so definitely a New Yorker. I live right on the border of Fort Greene and Clinton Hill...Echo City has a little flavor of Bushwick, some of that brownstone flavor around Clinton Hill, and it has this sort of legend's past and magician's past. I don't think there's any real world parallel because we made it up. They had magic shows in Echo City, and it was a place you would come to visit to see Black magicians in Brooklyn.

JS: Kingston features a lost of the 19th and 20th centuries' greatest Black magicians, a part of history that not much is known about.

TG: It was a lot of fun to do research for this. We discovered these incredible characters, like Black Herman, and Madame Deborah Sapphira, and Henry "Box" Brown, and it turns out there's this incredible tradition of magic in Black communities that's not very well known, so a guy like Black Herman, who sold out shows up and down Manhattan and Harlem, and was good friends with Marcus Garvey; he was a kind of legendary figure, pretty overlooked when it comes to magic history in America.

JS: How did it feel to illuminate such an interesting part of the African American experience?

TG: We had to enlighten ourselves first, you know. We didn't bring it to the project, so then when we started getting into it, we were amazed, and we even talked to magicians who never heard of them. As the book is coming out, we're getting a sense of how buried some of this knowledge is, which is sort of surprising, and so far it's been really interesting. Professional magicians who are aficionados of magic history have told us they've never heard of this, and it does speak to how these narratives can get overlooked, and these really influential figures have been overlooked over the years.

JS: How did you get involved with the incredible team of Rucker Moses?

TG: We linked up through the publisher; they paired us up. I worked with the editor of the book a long time ago, and we wanted to work together, and this seemed like a good fit. It turned out to work really well, and I'm good friends with these guys. They're a lot of fun to work with. They come sort of from the TV world, so they're used to collaborative writing, so I got to learn a lot about what it's like to come up with a story about this, whereas in the fiction world, we kind of go it alone. It was fun to beat ideas back and forth.

JS: How did writing a YA novel differ from your other projects?

TG: I mainly try to let the characters and the voice of the story really kind of guide it, so in my process, it wasn't that different because I approached it the same way I would approach an adult novel from that particular character's vantage point. Process-wise, it didn't change, but as far as the content, it's much different than some of the adult stuff I've done. It's a lot about family, you know, the main drive of the book is the relationship between father and son. In the last book I wrote, the main focus was on a father and daughter, so maybe not all that different, just a different point of view.

JS: I interviewed another YA author, Katharyn Blair, recently who said she felt she could write more optimistically in this genre. Do you agree with that?

TG: Definitely, absolutely, you can be relieved of all obligations to be edgy, any kind of extra action or violence that you might feel pressured to do in an adult thriller. You kind of wind up putting in heart and uplifting stuff, so yeah, it's a much lighter experience...You could go with the reactions of these kids because they're blown away by everything, and writing something magical in a kids' world does feel more natural because they're more prepared for magic to be real.

JS: What do you think kids, especially those in Brooklyn, will take away from this book?

TG: Brooklyn kids, I think, can see themselves in this, and take away that maybe magic is real, and the things that may seem or feel out of reach are possible. Kingston's a big dreamer and he never gives up, and he goes kind of the extra mile to bring his dad back. Even though the adults have sort of communicated to him to accept it and move on with his life, Kingston never does.