Books: "Drowning In Screen Time" On The Ever-Growing Reliance On Devices 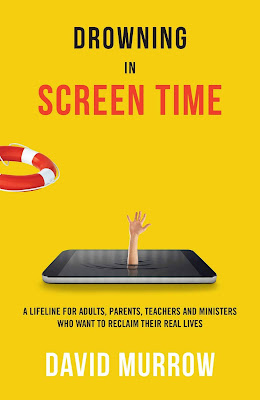 Drowning In Screen Time: A Lifeline for Adults, Parents, Teachers, and Ministers Who Want to Reclaim Their Real Lives

The trend was already heading to people revolving their world around electronic devices, and the pandemic brought that reality into stark contrast.

David Murrow, who has spent four decades working in the screen-addiction business, with his work airing for channels including NBC, ABC, CBS, Discovery, and HGTV, proposes a way back in the new book Drowning In Screen Time.

It is full of positive, practical ideas that can help you keep your digital head above water. It is a rescue plan for parents, adults, teachers, and ministers who want to help others, or themselves, achieve screen-life/real-life balance, built around Five Parables, which Murrow describes as "a big truth wrapped in a little story."

They illustrate to the reader what screens are doing to your family and relationships; why screen content is so addictive; and how to find freedom and confidence in real life. There is a look at how screens change the way people communicate, divide themselves into tribe, and affect relationships.

Murrow has learned from experience, as he writes here: "I was born in 1961, just as screens became ubiquitous in American homes. My father bought his first black-and-white TV a few months before I arrived. If we were home and awake, the TV was on. The Murrows started each morning with the Today show and fell asleep to The Tonight Show. We were the first family on the block to own a VCR - a Betamax purchased for $1,600 in 1977. (That's almost $7,000 in 2020 dollars, adjusted for inflation.)

My father's screen obsession disgusted me. He spent most of his free time absorbed in TV, avoiding real life. I'll never do that, I told myself. I pretty much stopped watching television when I became a teenager. I was proud of myself for conquering Dad's compulsion.

Ironically, I graduated from college and went immediately into the TV business. For the next two decades, I produced screen content but rarely watched it.

Then in 2003, my screen addiction came calling in the form of a PowerBook G4 laptop computer with broadband internet and a wireless router. The combination of portability, Wi-Fi, and the World Wide Web proved irresistible. I carried that laptop to my easy chair in the evening and into my bedroom at night. Unlike my father, whose TV brought in fewer than a dozen channels, my computer provided an inexhaustible supply of entertainment, websites, email messages, and news updates. As a result, my screen time began to rival my father's.

By the late 2000s, more and more of my attention was absorbed by that little thirteen-inch LCD panel. In the process, I was slowly losing touch with the real world. My body was home, but my mind was in cyberspace. I didn't notice my absence, but my wife and kids did. One autumn day, they confronted me about my obsession with screen time. I faced the truth: I was trading away my real life for screen life, just as my father had.

I wish I could say I declared victory that day, but each new screen technology has brought with it unexpected temptations.

About three years ago, a buddy invited me to try Words with Friends. It's like Scrabble, but you play it on your phone. It was an entertaining way to pass the time whenever I had a few minutes to kill: standing in line at the grocery store, waiting at the baggage carousel, or sitting alone in an easy chair. I reckoned I was playing about an hour or two a week, so it was a big deal. I was still getting my work done and spending time with my loved ones.

Then Apple introduced iOS 12, which automatically issues a weekly screen-time summary. When I saw my first report, I dropped to my knees. Over the previous seven days I had blown more than twelve hours playing Words with Friends. Once again, the hypnotic power of a glowing screen had blinded me to my obsession. I was angry at myself for wasting so much time in pursuit of something so meaningless.

I immediately deleted the game. Those first few days were difficult. I instinctively reached for my phone dozens of times. I felt as though I was disappointing my friends for dropping out of matches already in progress. But over time, my desire to play faded. and what did I do with those extra twelve hours a week? I began researching the book you hold in your hand."