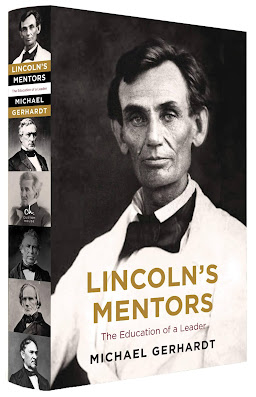 Lincoln's Mentors: The Education of a Leader

Michael J. Gerhardt is the Burton Criage Distinguished Professor of Jurisprudence at The University of North Carolina at Chapel Hill. He has testified more than twenty times before Congress, spoken to the entire House of Representatives during President Bill Clinton's impeachment in 1998, and rose to prominence in December 2019 when he was one of four constitutional scholars called by the House Judiciary Committee during President Donald Trump's impeachment proceedings. In 2015, he became the first legal scholar to serve as the Library of Congress' principal adviser in revising the official annotation of the United States Constitution.

Abraham Lincoln's name has been invoked lately, in the wake of the Capitol insurrection on January 6 and at President Joe Biden's inauguration, as his example can show the country how to heal its current divisions.

Lincoln is known as one of our most consequential presidents, the Great Emancipator who led the country out of the Civil War, but Gerhardt argues that the common view of Lincoln as a self-made natural-born political genius doesn't do justice to him or to history.

In Lincoln's Mentors, Gerhardt uses an original approach, engaging style and vast research to create this vital and timely contribution to our understanding of the sixteenth president. He will attempt to offer a fresh and insightful answer to the question of, How did a poorly educated country lawyer with no executive experience and only a single term in Congress become America's greatest president, leading the country through its moment of maximum peril?

"The giant figure of Lincoln seated in the iconic monument honoring him in the nation's capital captures the myth of Lincoln sitting alone, nearly godlike, contemplating the great issues of his day, head and shoulders above the fray. This is not how Lincoln learned to lead. This book is the story of how he did."

In 1849, Lincoln returned to Springfield, Illinois, after two seemingly uninspiring years in the U.S. House of Representatives, his political career appeared to be over. Distraught, Lincoln's sense of failure was so great that friends worried about his sanity. One thing he did not lose was a relentless ambition to make a lasting mark on the world, and that led him to five men, whose political experience, understanding of the Constitution, and personal guidance helped him chart his path to the presidency - Andrew Jackson, Henry Clay, Zachary Taylor, John Todd Stuart, and Orville Browning.

Gerhardt, a lifelong student of Lincoln and a nationally recognized authority on the relationship between presidents and the Congress, vividly details the impact of Lincoln's mentors throughout his life. He argues that Lincoln was not a god or a myth, but a mere mortal, albeit an extraordinarily gifted one, whose remarkable rise to prominence and power would not have been possible without mentors. Even as an obscure and struggling young man, Lincoln knew he needed mentors, that he could not learn in isolation and the skills he needed to become a great leader.

In nineteenth-century America, it was common for enterprising young men to seek mentors who would serve not only as father figures, but would also teach the skills they needed to succeed. For Lincoln, according to Gerhardt, mentors were something more, as they included not just men he actually interacted with - two such mentors were very important to him - but also three more distant figures who served as sources of inspiration and instruction.

Lincoln relied on them for most of his presidency, and its wasn't until his reelection was secured and the Civil War won, that their influence began to wane. At that point, his confidence in his own political skills, vision for the nation, and rhetorical power was at its height. It was a pinnacle he would not have reached without his five mentors, and without them, Lincoln would likely have remained a small-town lawyer. Without Lincoln, the United States as we know it may not have survived.

"Lincoln's ambition to make an enduring mark on the world led him to five men, whose experiences, political insights, vision of the Constitution, example, and guidance helped him navigate the path to the presidency," Gerhardt writes. "From these five, Lincoln learned valuable lessons on how to master party politics, to campaign for office, to understand and use executive power, to negotiate, to manage a Cabinet, to craft a speech, and to develop policies and a constitutional vision that fit the times and became his most enduring legacy. In the nineteenth century, it was common, particularly for enterprising young men, to find flesh-and-blood mentors, men who would serve not only as father figures but also as teachers of the skills they needed to succeed. Lincoln's mentors were something different. For him, mentors were not just the men he actually interacted with but also sources of inspiration and instruction - men to be emulated, men whose mistakes he was determined to avoid, and men with whom he could argue or take issue without fear of alienation or retaliation. There is no reliable evidence that he ever met two of the men who so profoundly helped him steer his course to the White House. Yet Lincoln referred to these two men as mentors, seeing them as far more than inspirational figures. I have followed Lincoln's lead.

"It is common for those who adore Lincoln to dismiss Andrew Jackson as a mentor because Lincoln campaigned so vigorously against Jackson and his political heirs, Martin Van Buren, James Polk, and Franklin Pierce, and for Jackson's most notable foe, Henry Clay. Yet Jackson bracketed Lincoln's life: he was the president during Lincoln's formative years, and he was the first president to appoint Lincoln to federal office. Jackson was the president who initiated the Black Hawk War, in which Lincoln became captain of a company of volunteers, and Jackson was the only other president who formulated a coherent and compelling case against secession and the only one whose portrait hung in Lincoln's office throughout his presidency. Furthermore, Lincoln agreed with Jackson's declaration of the unique position of the president as the only federal official elected and therefore representative of all the people of the Union. He adapted Jackson's understanding of democracy to the circumstances the nation confronted in a civil war, and he emulated Jackson's suspension of habeas corpus and Supreme Court-defying strategy."

Since you have read Gerhardt's summation of his exaggeration of Andrew Jackson, let's examine Lincoln's four other mentors:

Henry Clay - Throughout his life, Lincoln moved among Democrats who revered Jackson and Whigs who backed Jackson's greatest rival, Henry Clay. Navigating this world honed Lincoln's ability to maintain enduring friendships with men who opposed him politically. In 1832, Lincoln cast his first vote in a presidential election for Clay, not Jackson. A member of the "Great Triumvirate" (along with Senator John C. Calhoun of South Carolina and Senator Daniel Webster of Massachusetts) who towered over American political life for much of the first half of the nineteenth century, Clay served as Speaker of the House, Senator from Kentucky, and Secretary of State.

Until the end of his life, Lincoln proudly proclaimed himself a Clay Whig and praised Clay as his "teacher," "mentor," and "beau ideal of a statesman." Furthermore, he considered himself to be a "self-made man" like Clay. Clay was among the sources Lincoln cited most often before he became president and later as president. Lincoln not only studied and imitated Clay's renowned oratory, but also followed Clay's vision of a connection between the promise of the Declaration of Independence that "all men are created equal" and the Constitution as the implementation of that pledge.

Zachary Taylor - Lincoln's third mentor was the now mostly overlooked President Zachary Taylor. Taylor bookends the years 1849 to 1861 for Lincoln, who eulogized him in 1850. Later, as Lincoln traveled to his own inauguration, he singled Taylor out as the man responsible for "my political education." As Gerhardt observes, that phrase meant something particular to Lincoln and his generation. It referred to what people learned from actual political experiences, rather than from books. Lincoln was idealistic, but he also recognized the political advantages of the tough expediency of several of his mentors, including Clay and Jackson. He not only changed his mind about issues, but also sometimes changed allegiances - even when that meant undermining those who had guided his ascent.

In one of the most notable examples of those shifting allegiances, Lincoln backed Taylor for president at the expense of Clay, even though there was probably no politician who had shaped Lincoln's convictions more than Clay. Lincoln hailed Taylor's stance against secession and cited many of Taylor's actions as precedent for his own, including making record numbers of recess appointments and treating Southern forces as rebels and traitors. Lincoln also followed Taylor in asserting (as did Jackson) that a president must sometimes lead Congress rather than the other way around, in creating national policy.

John Todd Stuart - The fourth mentor was John Todd Stuart, a cousin of Lincoln's wife, Mary Todd Lincoln. Stuart met Lincoln when the young frontiersman was working as an assistant surveyor, and knew his future held the promise of much greater things. A member of Congress and longtime state legislator in Illinois, Stuart introduced Lincoln to law and politics. He served as a model for Lincoln in debating political opponents and conducting himself in the courtroom. Through his social and political connections, Stuart made it possible for Lincoln to meet many of the people who would help him rise. Even after Stuart joined the Democratic Party in 1856, Lincoln continued to respect him and seek his counsel.

Orville Browning - The fifth mentor, Orville Browning, was the least likely of any of Gerhardt's group to have become a counselor to Lincoln. A friend of Lincoln's like Stuart, Browning was also an occasional rival. Nevertheless, they were frequent allies as Illinois state legislators, and Lincoln repeatedly turned to Browning for advice throughout his life. At times, Browning, as well as Stuart, counseled Lincoln about his personal life. Browning and his wife attempted to advise Lincoln through several romantic relationships. including the one they (and Stuart) found the most problematic, which was Lincoln's marriage to Mary Todd.

Moreover, Browning helped found the national Republican Party as well as the state Republican Party in Illinois. He fashioned the Illinois Republican Party platform in 1856, on which Lincoln ran against Stephen Douglas in their celebrated contest for a seat in the U.S. Senate. In addition, Browning's advice after Lincoln was elected president foreshadowed the strategy that Lincoln employed to keep the two promises he made in his First Inaugural Address - namely, not to initiate hostilities with the South, and to protect the Union above all.