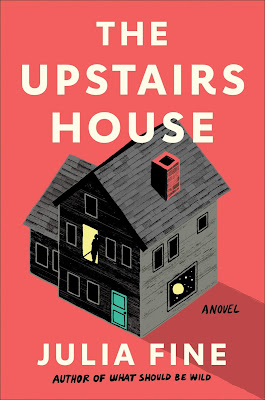 Julia Fine is the author of the critically-acclaimed What Should Be Wild, which was shortlisted for the Bram Stoker Superior First Novel Award and the Chicago Review of Books Award. She teaches writing in Chicago, where she lives with her husband and son.

The Upstairs House is Fine's new work, an unsettling meditation on new motherhood that goes deep into a postpartum woman's psychological unraveling, which coincides with a ghostly arrival.

After the difficult childbirth, new mother Megan Weiler is largely raising her baby alone, her husband too often away for work. she is physically and mentally exhausted, but also plagued by the pull of her unfinished dissertation on mid-century children's literature.

Megan is then visited by her new upstairs neighbor, the ghost of Margaret Wise Brown, the author of Goodnight Moon, whose existence no one else will acknowledge. It seems Margaret has unfinished business with her former lover, the once-famous socialite and actress Michael Strange, and is determined to draw Megan into the fray.

As Michael joins the haunting, Megan finds herself caught in the wake of a supernatural power struggle. Until she can find a way to quiet these spirits, she and her newborn daughter are in terrible danger.

Fine, in this gripping story you won't stop reading, brings these two historical figures and the publishing world to life. The 1940s affair between Strange, who was a cross-dresser, and Brown was an infamous scandal of its time, and here Fine pays their relationship and the world of 1940s children book publishing a rich, dazzling homage. There are even cameos from legendary publisher Ursula Nordstrom and actor John Barrymore, Michael Strange's third husband.

The postpartum haunting by these unusual characters serves as a powerful metaphor for a woman's fraught relationship with her body and mind, and makes The Upstairs House a very compelling read.

The story alternates between what Megan is going through and her trips back in time with Margaret and Michael, such as this part, set at a party in November 1941: "The night is too cold for the terrace, but Margaret, in her dark green dress, has tried. She has escaped the inside of Harrison Tweed's celestial penthouse - New York's velveteen elite clinking martini glasses, plinking out piano ditties, gossiping about bankruptcy and cuckolds and divorce - and now stands shivering on the balcony. Below her the East River sits serene, Welfare Island barely visible through fog. Margaret leans out over the wrought-iron barrier and finishes her drink, leaving the tumbler balanced where the railing meets the building.

"Ostensibly, this party is for nineteen-year-old Diana, who is leaving for Hollywood in the morning, despite her mother's efforts to keep her in New York. But Diana made her exit early. Most of her cohort is also gone, as are all Margaret's close acquaintances. Michael, Margaret's mother, has become her dearest confidante, yet even after two years of these soirees, the others still are not her friends. Especially not Michael's husband Harry's crowd - didactic and judgmental, talking finance and legal justice, puffing their cigars and letting them be charmed by Harry's wife, but never her pupil. Harry himself tolerating Margaret, as he tolerates most of Michael's whims - the poetry he doesn't read, the radio program to which he doesn't listen, Michael's expensive tastes and dilettantism. Margaret is distinctly aware of herself as being tolerated, which makes her uncomfortable, and timid in the company of Michael's high society.

"What she sees now in the vast drawing room: a small group of lawyers in a corner by the tall stalks of delphinium, Harry at their helm - his flat, pleasant face nodding along to the man next to him, only the reddening tips of his wide ears betraying any sort of humor - and a conclave of Michael's devotees strewn about in armchairs by the fire. Michael stands by the painting of herself that hangs over the mantel, which, for better or worse,serves to highlight the difference between the debutante who sat for the portrait thirty years ago and the woman who holds court below it now. Both display the same thick eyebrows, the same narrow nose. An expression of defiant haughtiness that dares one to doubt her. But now Michael is fleshier. Her cheeks are fuller, her jewels more expensive. She wears silk trousers and a long string of pearls, and as she gestures toward the man next to her - a college friend of her son Leonard's - she keeps getting her cocktail ring tangled in the fringe of her shawl.

"'She'll have a chaperone, of course,' Michael is saying as Margaret approaches, 'and I made her promise never to stay overnight with her father. God only knows what goes on there after dark. Still, my poor Diana' - Michael's voice sits on the middle vowel, her eyes cast down - 'the press are going to eat her alive.'

"'But the film studio offered the contract?' asks the college friend, whose name Margaret cannot remember.

"'Of course the studio offered, they want her, everyone wants her - but only to have a Barrymore up on the marquee. They wouldn't sign her under any other name.' Michael's stage whisper carries to the group of lawyers, several of whom now turn toward her. Harry, looking up, offers a bland and thin-lipped smile.

"A member of the household staff appears at Margaret's side with a tray of old-fashioneds. Margaret considers her waistline, then the palpable tension between her two hosts. She takes the drink."