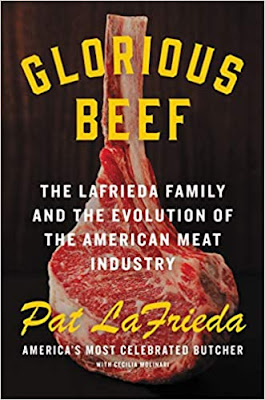 Glorious Beef: The LaFrieda Family and the Evolution of the American Meat Industry

In his new book, Glorious Beef, LaFrieda shares his family's legacy and pulls back the curtain to reveal a behind-the-scenes view of each stage of the process involved in bringing beef from pasture to plate and the truths behind the industry's story of survival and constant evolution.

It all began when Anthony LaFrieda, Pat's great-grandfather, decided to move from Italy to New York in search of a better life, and opened his first retail butcher shop in Fratbush, Brooklyn, in 1922. When Pat's father started working with his grandfather, the family business was located in a small spot inside a worn-down building in the Fourteenth Street Meat Market.

The family held onto their business during a tough period in the late 1990s when rents in the Meatpacking District skyrocketed and small businesses were being taken over by large impersonal corporations. The company kept on growing, and now, nearly a century after Anthony LaFrieda arrived in New York, Pat is at the helm of a company that has stood the test of time, providing meat through wars, the Great Depression, the tumultuous years in the 1970s when New York City was dubbed Fear City, 9/11, unprecedented hurricanes, and the pandemic.

In this excerpt, LaFrieda writes about what you will learn in this fascinating book: "Our national meat industry is an intricate yet remarkably efficient system that feeds millions of people across the country. When I joined the business in 1994, no one really cared about where the meat came from - they just cared about the quality. But the quality is directly linked to how those animals were raised, finished, and harvested.

"I first set out to share what I had been learning on the field with my clients many years ago. The more they knew, the better choices they would make for their businesses and patrons. In order to keep them informed on the latest trends and innovations and the industry's ever-evolving new technology and advances, I need to constantly stay up to date on what is happening in our industry as a whole.

"Beyond that, my meat purveyor role often extends into consulting, with chefs reaching out to brainstorm what they could put on the menu of their restaurants or how they could revamp their old menus to attract more customers. That's how many famous dishes came to be, including the Black Label Burger at Minetta Tavern, the Shake Shack all-natural burger, and our signature Original Filet Mignon Steak Sandwich.

"Most people don't know the amount of time, commitment, and work that goes into the piece of meat on their plate. I'm here to explain it to you. This isn't your average farm-to-table book. It's not for the faint of heart. I want to take you behind the scenes of each stage of the process: the ups and downs, the struggles, the accomplishments, and the misconceptions surrounding beef related to everything from our health and the environment to what you're really buying at the store." 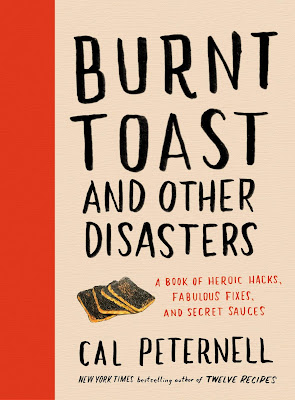 Burnt Toast and Other Disasters: A Books of Heroic Hacks, Fabulous Fixes, and Secret Sauces

Cal Peternell grew up on a small farm in New Jersey, earned a BFA in painting from the School of Visual Arts in New York City, and then found the inspiration to pursue a cooking career while living in Italy with his wife, the artist Kathleen Henderson. He went on to work at various restaurants in Boston and San Francisco before he started a twenty-two year stint as the chef at Chez Panisse in Berkeley, CA, first in the cafe, then the downstairs restaurant. Cal's other books include Almonds, Anchovies, and Pancetta, A Recipe for Cooking, and Twelve Recipes, which was a New York Times bestseller and won an ICAP Award. He launched a culinary-education podcast, Cooking by Ear, in 2018.

In Burnt Toast and Other Disasters, Peternell tackles the problem we all have, where there are some nights you want to make dinner, and it's not an inspiring selection in the refrigerator. Do you waste food, possibly because it might be too close to an expiration date, and time trying to figure out what to make from scratch, or do you just order takeout? He says to step up your game, and transform this cooking conundrum into a great meal.

Unlike chefs at restaurants, who have a full supply of sustainably sourced, 100 percent grass-fed, organic ingredients, home chefs have to contend with with the limits of what they can get at their local supermarket, as well as third-day leftovers that have lost some of their luster.

Peternell, who writes in a witty, engaging style, will give you a bag of tricks to level the playing field, with troubleshooting solutions including: making the best of burned food (Burned your toast? Time to make Cheesy Onion Bread Pudding!); hacking packaged food (with five variations on "Hackaroni and Cheese"); things restaurants often do wrong and you can do better (including pesto, queso, bean dip, ranch, and more); spicing up lackluster vegetables (Brocco Tacos dazzle in both name and flavor); and snazzing up dishes with "special sauces for the boring" (including vegetable purees and an infinite variety of savory butter sauces).

There also are recipes for "Old Man Cocktails" to accompany these meals, including the Bitter Old Man (one part bitter, one part part brandy) to the Wise Old Man (8 ounces water and a good night's sleep).