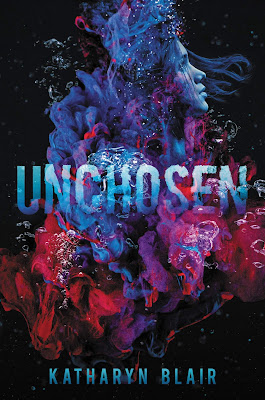 Katharyn Blair is a novelist and screenwriter, and Unchosen is her second novel for young adults. Her debut novel, The Beckoning Shadow, received two starred reviews and was the book of the month club for Book Box Club, Shelf Love Crate, and Beacon Box.

Unchosen focuses on a horrifying curse called the Crimson. It's highly contagious, spread through eye contact, and has turned the majority of humanity into zombies. Yes, it was written before 2020, so Blair was a little bit prescient when she wrote this thriller.

Charlotte Holoway is a survivor and one of a small band of humans, along with her two sisters, in a ragtag settlement in what used to be Los Angeles where they're set to defend themselves from the hordes. Charlotte feels inadequate next to her two sisters: her older imperious sibling, Harlow, commands their crew and has captured the heart of Charlotte's childhood crush, Dean. Her talented younger sister, Vanessa, is considered to be the Chosen One, who, according to legend, can end the curse and save humanity.

In addition to her writing, Blair has had an incredibly varied career, working as a social media coordinator for several films at 20th Century Fox, an intern at her city's Parks and Recreation Department, a gymnastics coach, and, most recently, a writing professor at Azusa Pacific University.

I chatted with Katharyn recently about her new book, Unchosen, and her is some of our conversation:

Jason Schott: Tell me about the inspiration for your compelling new book, Unchosen.

Katharyn Blair: I am the oldest of four sisters, so I grew up with the sister dynamic and I always kind of wanted to see what would happen - I have seen a lot of movies and shows, supernatural ones, with a lot of brother dynamics enough times - I really wanted to see how sisters deal with the end of world. It was basically just a lot of things I love came together and made the story. I'm very interested in, obviously, history, and I thought the piracy code was very interesting. I'm reading a book about female pirates and their history, and it just kind of stuck out to me, stuck in my mind for a while. Then, of course, there's zombies, and I'm a huge "Walking Dead" fan, so I always wanted to do a little twist on that. Those just kind of all came together and then mixed with the idea that somebody would rise up and help them, when she wasn't supposed to, or she wasn't the one picked to; I think we all kind of know that feeling of kind of just being a little shy of the grade. You know, my sister's a prom queen, and I was just kind of 'in high school,' so I know what it's like to be not really cool or not the one that the light shines on, so I wanted to blend that in. I just had to figure out how to blend in a curse and a virus, and I wanted to make sure to  add the human element to it, so that's just kind of how that all came together. I sent a bunch of stuff to my lovely editor, and asked if she thought it could be a book, and it took a couple of months of ironing out, with the screenwriting rules, and I also wanted to kind of do a twist on how it was transmitted. I started to write this in 2018 when my youngest daughter was born, so I started realizing as the coronavirus took over, I was like, 'oh no, I wrote a book about a virus,' bad marketing, but I wanted to have a different way of transmitting it than blood, saliva, or air particles, so I made it eye contact. I thought that would be kind of terrifying, and it was. It was really scary to write.

JS: How much does your screenwriting influence your literary writing?

KB: It is the only way I can do it, actually. I have my MFA in screenwriting, and during that tenure, I was writing novels. I kind of assumed that I wasn't going to be a screenwriter. I'd write things and my professors would be like, 'this would be a really good novel, but you have to figure out how to make it a screenplay,' so it was extremely odd how that came about, and it wasn't until three years after I left the program that I realized that they're completely different, but they can complement each other, novels and screenplays, so I started reading screenplays and really trying to hone that skill, and I only plot my novels using a screenplay format, figuring out structure and the proper twists and turns, where they're supposed to be, and I'd love to make it very cinematic - if it's not cinematic, I don't want to write it. I use the screenwriting rules, which is an odd way of doing things, but I found that it really helps keep the story moving.

JS: Unchosen definitely felt cinematic, and it felt like you jump into the action immediately, whereas other novels it can take awhile to get that suspense.

KB: That's what I was trying to do (laughing). There's a lot of wonderful books in the world, and you don't have to keep reading something you're not interested in. I try and make sure to get to that point quickly, and keep it interesting since I'm one book amongst millions of beautiful crazy, awesome books, so I wanted to stand out.

JS: What inspired you to write YA books, as opposed to novels for a broader audience?

KB: I don't know if it was even a choice, I've always just kind of defaulted to telling the story about young people. In high school, I would write stories in the side of my math notes, and you know, fail math, but my characters would always wind up being 17 or 18, that's just the way I was processing, and that age always kind of stuck with me. I feel like even though I'm 31, I feel like I'm kind of 17. I have three kids and a mortgage and I still feel like I'm in high school. I heard Rainbow Rowell once say that you need that time to then go back and be able to process what that time in your life was like. That's why a lot of women my age who had really hard teenage years feel, ok, it's safe writing about teenage years when they're in their thirties because we took that time to process it and figure out what we would have liked to say had we been able to at that age, and that stuck with me. I'd love to start - just this year, I was figuring out what I wanted to do and branch out, I was talking to my agent about some adult stuff because I'm realizing I can really do both. I'd really love to, but the YA genre is always near and dear to my heart. There are some fantastic adult fantasy novels that are wonderful and breathtaking, and I don't want to be the person that lumps an entire genre together, but so many adult books are like 'I found a bunch of secrets in my dead mother's attic, and they were very sad, and then we got a divorce, and that was it,' so I always gravitated to YA because it always felt more alive...There's something about YA where, maybe it's the age, and they're more hopeful and you want to write for a generation that can change things, so you're not embarrassed about writing a happy ending or a hopeful ending.

JS: Zombies are a major part of Unchosen. Tell me what inspired that.

KB: People always fall into two camps, where they are either kind of vampire people or zombie people. That's just always how I kind of pictured it; people either really like zombies or really like vampires. That's probably not true, but it's the dichotomy I create when I was a kid. I love vampires, I love how they're smart and timeless, and zombies just scared the crap put of me! They just scared me so bad I couldn't watch anything with a zombie. It wasn't until I was asked why I don't write about zombies, and I said I had a really bad C-section with my oldest daughter, where I was bleeding out, she was purple and it was very traumatic, where I could see that she wasn't moving when they pulled her out, and I had really bad - my husband's a psychologist at the VA - and it wasn't until a year later when I was so scared about talking about it that he was like 'I think you have some PTSD from that experience,' and it was a really scary thing to think that if I have another child, I might wind up having a C-section again. So, I got pregnant with my son, and I was like, I'm going to have to do this again, it's so scary. I was sitting at home one night, and I was scrolling through Netflix and I saw 'Fear The Walking Dead' and I was like, I'm already kind of scared, like my life is kind of scary, I might as well do something that scares me a little more, I was hooked! I plowed through 'Fear The Walking Dead' and then I started 'The Walking Dead' and there was just something so refreshing about facing that fear and then watching everybody in that show face their fears and that was just something that I hadn't seen in a long time, and it just resonated with me. I realized I'm a zombie person now; I like zombies because, in every zombie story, people have to face a terrifying thing and they have no choice. It's usually like vampires can hide in society and you can be with them or not. With zombies, it's like 'the world is done' and you have no choice, you have to step up to the plate now, and there's something about it that was like, 'I can do this. again.' I was obsessed with stories of survival and zombies, and I wanted to do something that made it just a little scarier, and I was thinking about 'what would make them scarier? If they could talk, that would be terrifying,' so I made them a mix of a sentient creature and one of the zombies from 'The Walking Dead,' so I had a lot of fun with it.