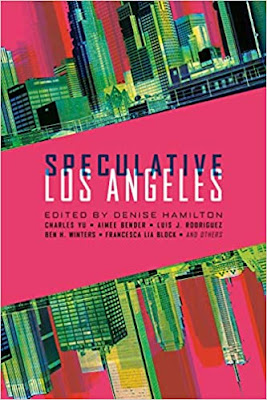 Denise Hamilton is an Edgar Award finalist, author of seven crime novels, and the editor of the best-selling anthology Los Angeles Noir, which includes Susan Straight's Edgar Award-winning short story "The Golden Gopher," and Los Angeles Noir 2: The Classics. Hamilton is a Los Angeles native who refuses to speak only in English, a former Los Angeles Times journalist, a Fulbright Scholar, a noir and sci-fi/fantasy geek.

Speculative Los Angeles, which is edited by Hamilton, is a new city-based anthology series that features all-new stories with speculative, sci-fi, and paranormal themes, with each using distinctive neighborhood settings as a launching pad.

In an essay titled "City Of Illusions," Hamilton writes, "Los Angeles is named after heavenly beings, but here at the continent's edge, it's always been the demons that inflame our imaginations and apocalypse that haunts our dreams.

"As an incubator of the future, we already live with the tropes of dystopian fiction. Reality for us means giants forest fires blazing down to the Pacific; powerful earthquakes; extreme droughts; rising seas; Orwellian surveillance; exploring tent cities of the dispossessed; and of course, Hollywood's dream factory, where the virus of celebrity worship incubated, then spread like a sci-fi pandemic around the world.

"Indeed, one can argue that Los Angeles is already so weird, surreal, irrational, and mythic that any fiction emerging from this place should be considered speculative."

Hamilton commissioned fourteen stories, including one of her own ("Past The Mission," about Encino), to capture that feeling that it's a city that can be what you imagine it to be. It features some of the city's most prophetic and diverse voices reimagining the metropolis in very different ways. These essays feature twenty-first-century changelings, dirigibles plying the suburban skies, black holes and jacaranda men lurking in deep suburbia beachfront property in Century City, walled-off canyons and coastlines reserved for the wealthy, psychic death cults, robot housemaids, and an alternative LA where Spanish land grants gave way to urbanization.

Similar to the Akashic Noir Series book on LA, each story in Speculative Los Angeles is set in a distinctive neighborhood filled with local flavor and landmarks. This speculative fiction is meant to provide a wormhole into other worlds while also commenting on our own.