Books: "A Season in the Sun" on Brady & The Bucs Winning The Super Bowl 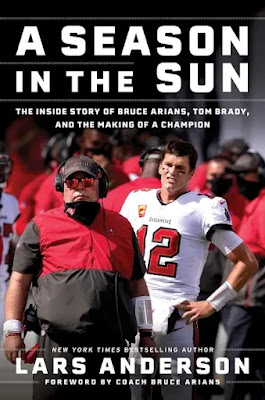 A Season in the Sun: The Inside Story of Bruce Arians, Tom Brady, and the Making of a Champion

By Lars Anderson; featuring a foreword from Coach Bruce Arians

When legendary quarterback Tom Brady decided to leave the New England Patriots after winning six Super Bowls in twenty years for the Tampa Bay Buccaneers in March 2020, it sent shockwaves through the NFL.

This came after the Buccaneers' courtship of Brady, which was so secretive that it was dubbed Operation Shoeless Joe Jackson because the prospect of him joining Tampa Bay was as likely as Jackson emerging from the cornfield in the landmark baseball movie Field of Dreams. The Buccaneers believed that Brady could still be an elite player after a tough finish to the 2019 season, in which the Patriots were bounced in the first round of the playoffs. There is an hour-by-hour account of how the deal went down that is riveting.

The day Brady made it official, March 17, 2020 was admidst the country entering an unprecedented lockdown due to the coronavirus pandemic, which brought a whole lot of uncertainty as to how the NFL offseason would be conducted and if there would even be a season that fall. How the Buccaneers and the NFL dealt with the pandemic is certainly a major part of this book.

It didn't take long for Brady and Buccaneers Head Coach Bruce Arians to get to work putting together a team that would compete for a championship. Brady was able to lure his old Patriots tight end, Rob Gronkowski, out of retirement, which was the first thing many people thought he would do when he relocated to Tampa Bay. He also convinced running back Leonard Fournette and wide receiver Antonio Brown, his brief teammate in New England in 2019, to sign on and complete a solid offense to go along with an already-established quality defense.

For Brady, this was a new challenge, as he entered this season at 43 years old, playing long past what is the normal retirement age in the NFL, and he would be going it alone without New England head coach Bill Belichick by his side.

Arians was also on a mission, as he came out of retirement to coach in Tampa Bay in 2018, at the age of 65, in search of the one thing he had not yet achieved, a Super Bowl championship.

The Buccaneers started off slow, as they got run out on opening day by Drew Brees and the New Orleans Saints. It took a while for Brady to get on the same page with Arians, and offensive coordinator Byron Leftwich, as would be expected for a player who was used to one coach and system for his whole career.

Just as they started to appear to get into a rhythm, they dropped three out of four games - another drubbing by the Saints, 38-3, in Tampa on November 8, and tight 27-24 losses to the Los Angeles Rams and Kansas City Chiefs - to leave them with a 7-5 record in November.

A well-timed bye week was on the horizon, and that was when Leftwich made critical adjustments that completely changed their fortunes, as they never lost again.

The Buccaneers became the first team in NFL history to play the Super Bowl in their own building, and they made the most of it. They completely dominated the defending champion Chiefs, 31-9, to win Super Bowl LV, giving Brady his record seventh ring.

A Season in the Sun is the definitive account of this improbable championship team, as Anderson was given unprecedented access to Arians, giving the reader rare insight into how an elite NFL coach manages his team and a superstar quarterback, which was achieved by essentially making Brady a part-time coach and a part-time general manager. Brady, who never had a personal relationship with Belichick. views Arians as a cool uncle that he enjoys having a beer with, or over to his home for dinner.

There is also a deep dive into Brady's farewell from New England, including scenes of him saying goodbye to Patriots owner Bob Kraft and Belichick. There are also multiple chapters on how Brady is able to be so successful at 43 years old, and how he acclimated to Tampa, including moving into a house once owned by Yankees Hall of Fame shortstop Derek Jeter.

Lars Anderson said of what inspired him to write A Season in the Sun, "In 2016 I co-authored a book with Bruce Arians, The Quarterback Whisperer, and during the writing process we became close. Once the Bucs reached the playoffs last year, Bruce's agent, Mike Fetchko, called me about the possibility of writing a book about Tampa's season if the Bucs won the Super Bowl. I relished the chance to work with Bruce again. Though Bruce didn't help write this book (though he did pen the foreword), he spent hours and hours with me reliving the 2020 season in painstaking detail and paved the way for me to get all the access to coaches and players I needed...

"This is my 12th book, and the reporting for A Season in the Sun was unlike any other project I've worked on. To begin with, I conducted all of my reporting after the Super Bowl - I have to admit, I didn't even think the Bucs would be hoisting the Vince Lombardi Trophy at the end of the season, so this book idea wasn't even on my radar. This meant I had to re-create scenes and conversations through extensive reporting once the Super Bowl was over. And when I did my reporting, I met most of my interview subjects in Tampa at a coffee shop; the facility at One Buc Place was still off-limits to anyone who wasn't a member of the organization."

Anderson said of the Buccaneers' Super Bowl victory, which was unique in many ways, "What made it so extraordinary was that Bruce was the oldest head coach to ever win a Super Bowl and Tom Brady was the oldest quarterback to win a Super Bowl. Plus, the Chiefs were favored and not many people outside of the Tampa organization gave the Bucs a chance to pull off the upset. It was a remarkable reminder that age is only a number and an illustration that, even in the winter of a coach's or player's career, they can still enjoy one last moment of summer."

Also on Tom Brady and the Patriots: It's Better To Be Feared by Seth Wickersham, on the relationship between Brady, Belichick,and owner Robert Kraft, as they put together their dynasty  - click here for our review.