Books: Patriots Dynasty Examined In "It's Better To Be Feared" 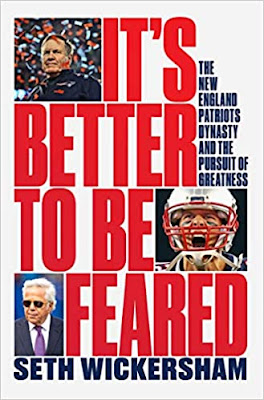 It's Better To Be Feared: The New England Patriots Dynasty and the Pursuit of Greatness

A week ago, the country was captivated as Tom Brady made his return to Foxborough to face his old team, the New England Patriots and their coach Bill Belichick.

Brady and Belichick teamed up to win a record six Super Bowl championships in their 20 years together with the Patriots before Brady bolted to the Tampa Bay Buccaneers in March 2020 and promptly won another championship with his new team.

Seth Wickersham, a senior writer at ESPN, has written one of the most definitive books on the successful pairing, as well as team owner Robert Kraft, It's Better To Be Feared. He covered the Patriots since Brady took over as the starting quarterback in the 2001 season. This book was conceived after Brady left the Pats.

Due to the length of their dynasty, it certainly had peaks and valleys, and the book is divided into three parts to account for that.

The first part covers the three Super Bowl championships they won in their first four seasons together, from 2001 to 2005. The middle part covers the plateau period from 2006 to 2014, in which the team did not win another Super Bowl, losing twice in the title game to the underdog New York Giants, including the first one which spoiled a chance at a perfect season; and exposed scandals that dented Belichick's credibility, including Spygate, when they were found to have filmed the St. Louis Rams' practices ahead of Super Bowl XXXVI in 2002. The final part of this epic focuses on the period starting in 2015, when they won another three Super Bowl championships in five seasons.

Wickersham captures this two-decade quest for glory, with Belichick and Brady's unrivaled brilliance, ambition, and ruthlessness. They both are more similar than would appear, as they both united in their shared quest to prove people wrong. Belichick was coming off a 5-11 season in his first year with the Patriots in 2000 after infamously resigning as Jets head coach before he even coached a game, and Brady was an sixth-round draft pick.

This book examines how Brady and Belichick didn't just transform an afterthought of a team (think how they were in the early 1990s before Bob Kraft became owner and brought in Bill Parcells) into a landmark franchise.

Wickersham looks at Belichick's tactical mind, unique work habits, and strained relationships, including his sincere but unspoken love for his players and a near fistfight with a former assistant coach. This is a mastermind dedicated not only to winning, but showing how you can be an unbeatable team in an era designed to present the emergence of a single, dominant team.

There also is a unique look into what makes Brady tick, starting with his childhood in northern California to his challenging years at the University of Michigan to his astonishing early stardom in the NFL. Brady was driven by an overwhelming ambition to be great, not as an endpoint, but as an unfolding process.

Keeping the dynasty going took a toll on Belichick, Brady, and Kraft, and there were inevitable clashes between the three of them. These conflicts resulted in the best performances, but also let to the dissolving of this dynasty.

One revelation Wickersham divulges it was not much of a shock that 2019 was Brady's last year in New England. His movements that year, including selling his mansion in Brookline that summer, indicated he was ready to move on after not getting a contract extension from the Patriots. Kraft wanted to give it to him, but Belichick said no.

The final game of the Brady-Belichick era at Foxborough was on January 4, 2020 in the opening round of the playoffs against the Tennessee Titans. Brady and his family went into it with a feeling that there was a finality to the game, which the Patriots went on to lose to the Titans. Brady would leave the Pats for the Buccaneers two months later.

Wickersham writes of the aftermath of the game that night: "Belichick stood at a podium, in a state of morbid shock. He had one described a season-ending loss as 'a crash landing,' and now he was tasked with explaining something he had yet to process. He said little, expressing pride in his team and complimenting the opponent. Dead air hung between reporters' questions; nobody tolerated awkward silences like Belichick. His breath - heavy through his nose and into a microphone - was the loudest sound in the room. One reporter asked if Belichick expected Brady would be back in 2020.

'Yeah, we just finished this game,' Belichick said. 'So we're focused on this game, okay?'

The coach glared, narrowing his eyes.

Someone asked Belichick to address the fans that had supported him through 'thick and thin.'

'I wouldn't say it's been all that thin around here, personally. Maybe you feel differently.'

A few minutes later, Belichick exited through the side door. Brady was due to speak next. He usually took his time after games, win or lose, styling his hair and buttoning up his suit until it was just right. But Brady appeared pieced together in a navy shirt and a stocking hat, as if he hadn't even showered. He often looked ill after a season-ending loss and took an inordinate amount of pride in his ability to stifle his raw and honest feelings. This time was different. He was disappointed but unhurried, relieved, almost liberated.

'Who knows what the future holds?' he said. 'We'll leave it at that.'

Brady chatted with a few more reporters, gave a Patriots executive a goodbye slap of a handshake, and soon after emerged from a black curtain behind which only family and friends were allowed. (Gisele) Bundchen at his side, Brady walked quickly, carrying his exhausted daughter like a father after a long day at an amusement park, past Patriots staffers and security, past people who held their phones for a shot of a legend on his way out, before turning toward the parking lot and fading into the foggy darkness.

I left the stadium sometime after midnight and drove north on Route 1, thinking about Tom Brady and Bill Belichick and what had been gained and lost over the past two decades. I had covered all aspects of their careers as a writer at ESPN. I had visited Brady's home and had late-night conversations with Belichick. I knew their friends and enemies. My writing at times had flattered them and at other times had angered them. They are two American originals, two very different men with very different personalities who had entered the world of professional football at different times and thrived in it together more successfully and for longer than anyone else in the history of the sport. They both arrived in New England in 2000, broken and scarred by the fragility of their dreams and driven in a way few can understand, much less articulate, their status in a game comprising mostly random and barbaric events absolutely central to their identities, crowding out almost everything else. From the start, they were extremists within an extreme profession...

The New England Patriots were a subculture within a spectacularly unhealthy world. They were defined by many of the things that defined America during the first two decades of the current century: an embrace of overwork; a refinement of craft to a previously unseen level; empiricism and a love of data, along with the creation and marketing of pseudoscience; tribalism and both its cohesive and splintering features; the pursuit of agelessness; an erosion of ethics; and, finally, a zero-sum ethos toward victory. What made them distinct was their sheer endurance. As everything in the world seemed to speed up and fracture, the team's excellence remained a hard fact of life. The New England Patriots of Tom Brady, Bill Belichick, and Robert Kraft embodied a pitilessness and selfishness and ambition that any maniacally driven person possesses, but which they had in greater measures. By January of 2020, the three of them had become denizens of a football world they could not live without. They blew past all the off-ramps and pushed every norm and boundary and rule until they had helped create a new football world altogether."