Books: "Dabo's World" On One of College Football's Most Successful Coaches 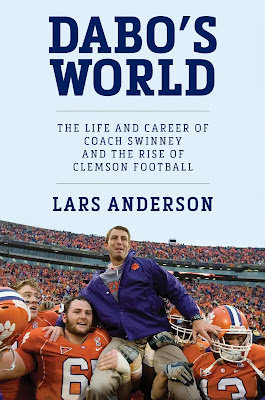 Dabo's World: The Life and Career of Coach Swinney and the Rise of Clemson Football

Lars Anderson is the New York Times bestselling author of seven books, including celebrated works on college football, including Chasing the Bear, The Storm and the Tide, Carlisle vs. Army, and The All Americans.

Anderson's new in-depth look at a college football legend is Dabo's World. This is the first-of-its-kind biography of one of the best college football coaches in the country, Clemson's Dabo Swinney, and it attempts to unlock the secrets to his success, including his coaching methods and his theories for developing players.

Growing up in Pelham, Alabama, Swinney was a huge fan of coach Bear Bryant and his Alabama Crimson Tide. Every Sunday he would watch The Bear Bryant Show surrounded by his father and brothers in the living room of their two-story home after church.

Dabo wore an Alabama hat as he strolled through the halls of his elementary school, as football really got his imagination going. He not only had an interest in football, but became an accomplished baseball player by practicing with his brothers.

The Swinney family's life changed when Dabo's older brother, Tripp, was the passenger in a car accident just a block from the family home. The impact was so horrendous that sixteen-year-old Tripp was thrown through the windshield, and suffered severe head trauma. He was in a coma for weeks, and when he did regain consciousness, he had no memory or recollection of anyone. One day, in an instant, Tripp's memory returned, so a tragedy was avoided.

Just as the family recovered from that adversity, Dabo's father, Ervil, started to see his washing mashine repair shop business fall apart, which led him to taking on major debt and began to drink heavily. He was a violent drunk, and would punch walls, throw lamps, and break windows, even one time throwing the family Christmas tree across the living room. Many nights, Dabo and his mother, Carol, would head to a hotel or sleep in their car deep in the woods to avoid Ervil, as they were too afraid to go home.

Dabo took on his role as the man of the house at a young age, as he  started working at 14 years old, at a job cleaning gutters. A little bit later, when Dabo was in eleventh grade, his parents divorced. By that point, Dabo was playing on the varsity football team at Pelham High School and he reunited with his childhood friend, Kathleen, who would become his girlfriend who told him that he could tell her anything that is going on his life after he was concealing family hardships. Dabo and Kathleen got married in 1994 and have three children.

One life-changing event for Dabo came on February 3, 1986 when he drove with a friend to Pelham High for a Fellowship of Christian Athletes event. Stewart Wiley, a youth football coach who started the FCA Group at Pelham High, encouraged Dabo to become involved with the organization. Dabo, 16 years old at the time, wanted to go to this meeting because the speaker was Joey Jones, an Alabama star receiver who was one of Dabo's favorite players.

Anderson writes, "Dabo expected Jones to tell stories about the football team in Tuscaloosa. Instead, he talked about how he had accepted God into his life and how that changed everything for him. Dabo was so moved by Jones's words - and by the spirit - that he wound up praying with Jones after the talk and accepting Christ as his Lord and Savior. After the meeting was over, Dabo went home, walked into hid bedroom, and wrote down the date in his Bible: 'February 3, 1986 - I dedicated my life to the Lord today, and He will be with me forever.'

"Dabo was born again. Starting that evening, his faith would not only be at the center of his life - indeed be the very core of it - but it would also be the foundation of his coaching. It would always bring him comfort, be his North Star - but it would also one day bring on professional controversy."

Swinney was a three-year starter at Pelham High, a capable receiver who was a Birmingham News Scholar-Athlete winner. He went on to the University of Alabama, where he was a walk-on in his freshman year, and eventually, due to his incredible work ethic, played four games in his sophomore years in 1990, and was awarded a scholarship by Coach Gene Stallings.

Dabo's college life was a unique one, as he asked his mother, who was struggling to work as a sales clerk at a department store, to move into his apartment in Birmingham. One highlight was his mother Carol's cooking on Sunday nights, plate after plate of chicken and dumplings.

By Dabo's senior year, he excelled on special teams, but made the start at wide receiver when Alabama played Miami for the national championship in the Sugar Bowl on January 1, 1993. It was the first and only start of his college career, and it was a way for Stallings to reward Dabo for all of his hard work over four years. Alabama went on to win, 34-13, to earn the school's first championship in the post-Bear Bryant era.

Dabo became the first member of the Swinney family to graduate college, and his father, Ervil, was on hand for the occasion, which gave them a chance to reconcile.

For the next two years, Dabo joined the Alabama coaching staff and completed a two-year apprenticeship as a graduate assistant. In February 1996, Stallings offered Swinney the job of being the wide receivers coach, which he gladly accepted. Mike DuBose replaced Stallings, who retired after the 1996 season, and he retained Swinney.

Meanwhile, scandal started to swill around the Alabama program, which was placed on five-year probation due to a recruiting scandal, and even though Swinney was not directly implicated, he was let go from the school in early 2001.

Swinney then went on to work in the business world, working in a  sales job focused on negotiating leases on retail spaces at shopping malls. After two years of doing that, he found a way back into college football.

Clemson coach Tommy Bowden, who bonded with Swinney years before at the First Baptist Church in Tuscaloosa, called Dabo in January 2003 and asked if he wanted to become the Clemson wide receivers coach. His signature work would also be in recruiting, which made him a natural to take the next step.

By the 2008 season, it was clear that Alabama was on the rise, with Nick Saban at the helm in his second year with the Crimson Tide. Clemson faced Alabama in the opening game of that season, the Chick-fil-A Kickoff Game, which Alabama won 34-10. Things did not improve for Clemson, to the point that Bowden resigned after a dispiriting 12-7 loss to Wake Forest.

In this excerpt, Anderson writes of what Swinney did to set the tone early in his tenure at the helm of Clemson: "Dabo Swinney had been named interim head coach six days earlier on October 13, 2008, and he wanted his players to experience the intoxicating thrill of game day even before they reached the stadium. When he was an assistant, Dabo spent many Saturday mornings before kickoff meeting with recruits in a building away from the stadium. Once these meet and greets were over, he'd stroll through the parking lots, chocka-block with orange-clad fans tailgating from pop-up tents and cars and pickup trucks with Clemson flags sprouting from the flatbeds. Underneath the tents emblazoned with Tiger paws, fans grilled burgers and wings, tossed footballs and Frisbees, and sipped adult beverages. The atmosphere was electric - the sights, the smells, and the sounds overwhelmed Dabo's senses - and that always jolted the assistant coach, spreading a pinch-me smile across his face, filling him with the belief that he was the luckiest dadgum man alive, one who had the best job in America, surrounded every autumn Saturday by the pomp and pageantry and poetry of college football. Now Dabo was determined to have his players feel - really feel, deep down - the full-body shiver of emotions that he always enjoyed during these pregame walks through the parking lots.

So, after becoming interim head coach, Dabo called a meeting in his office with the state troopers who escorted the team buses from the football facility to the stadium on game days. Under Bowden and every other Clemson coach, the buses that ferried the players to the stadium had avoided traffic by taking a circuitous route using rural roads. But Dabo was adamant: He wanted the buses to drive through the middle of campus, through the beating heart of the tailgating fans, so his players could understand how the game was so important to so many. The team had often played lifeless, listless football through the first half of the 2008 season - a who-really-cares attitude had infected the roster and was a major reason why Bowden was no longer the head coach - and Dabo wanted his players to experience the heat of the fans' passion, to let it wash over them and, he hoped, inspire them to play the game of their lives...

For years the buses had simply pulled up to the door and the players - outfitted in sweat suits or whatever casual apparel they felt like wearing (most also with headphones on) - simply strolled inside, unbothered and unseen by fans.

No longer, said Dabo. This was his regime: The buses would stop at Lot 5 on Perimeter Road and the players would walk 200 yards through a cluster of screaming, high-fiving fans, providing the shot of adrenaline the entire program needed. What was more, Dabo mandated that his players wear a coat and tie. He also banned headphones, because his players needed to absorb the rush of sensory overload he had enjoyed on his game-day walks across the lots. Dabo instituted these rules to underscore to his players the specialness and seriousness of the occasion. He called this event the Tiger Walk. The reason for creating it was clear: He wanted his players to internalize the excitement and joy and fervor of the fans, to fully understand that they were playing for something that was far bigger than themselves or even their team.

Does all this really matter when it comes to winning football games? In Dabo's World, yes."