Baseball is a game full of memorable personalities, and there are two new books that capture some vintage stories you are sure to enjoy as Opening Day is upon us: Tony Lazzeri: Yankee Legend and Baseball Pioneer, by Lawrence Baldassaro; and Comeback Pitchers, by Lyle Spatz and Steve Steinberg. 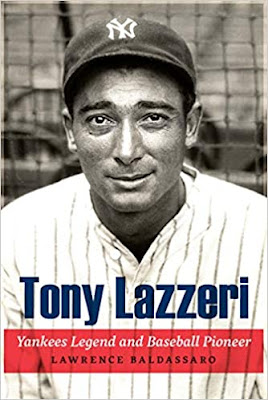 Lawrence Baldassaro is a professor emeritus of Italian at the University of Wisconsin, and the author of many baseball books, including Baseball Italian Style: Great Stories told by Italian American Major Leaguers from Crosetti to Piazza, Beyond DiMaggio: Italian Americans in Baseball (Nebraska, 2011), and The Ted Williams Reader.

In his latest book, Baldassaro has written the definitive biography of Tony Lazzeri, who was a part of the Yankees' legendary Murderers' Row lineup from 1926 to 1937, and became the first Major Leauge baseball star of Italian descent. He paved the way for another Italian-American, Joe DiMaggio, the Yankee Clipper, who began his career in 1936, continuing the Yankees' run of glory.

Lazzeri was an unassuming pioneer, and he played his entire career afflicted with epilepsy. He was the first player to his 60 home runs in organized baseball, one of the first middle infielders to hit with power, and the first Italian player with enough star power to attract a whole new generation of fans to the ballpark.

As a twenty-two-year-old rookie with the Yankees, Lazzeri played alongside such legends as Babe Ruth and Lou Gehrig, and immediately emerged as a star, coming in second to Ruth in RBIs and third in home runs in the American League. In his twelve years as their second baseman, the Yankees won five World Series championships and he was their third-most productive hitter, driving in more runs than all but five American Leaguers, and hitting more home runs than all but six.

Lazzeri is not as well remembered as other Yankee legends, partly because his legacy was tarnished by his bases-loaded strikeout to Grover Cleveland Alexander in Game Seven of the 1926 World Series, which is immortalized on Alexander's Hall of Fame plaque. The Yankees still rewarded Lazzeri with a generous contract heading into the 1927, which is still regarded as arguably the best team in their history, although recent fans would have a great case with the 1998 team that won 125 games, including 114 in the regular season.

Baldassaro writes of Lazzeri's imact, "Considering the virilty and score of national bigotry Italians faced at the time, it is not hard to understand the excitement caused by the sudden emergence of Lazzeri as a role model and source of ethnic pride for people who had long felt marginalized. Here was this son of immigrants who was not just playing at the highest level of the national pastime but was also being recognized as a superior player and a leader of the best team in baseball. And thanks to the increased newspaper coverage of baseball, as well as the rapid expansion of media in the 1920s - radio, movie newsreels, magazines - Lazzeri benefited from the newly created celebrity culture by becoming more widely known to a national audience than any other Italian player before him. That exposure and recognition in turn created greater public awareness of, and gave credibility to, the presence of Italians in the American game. In Lazzeri, Italians found a nationally recognized public figure who could counter the negative images that had been promulgated for decades...

"That is not to say that no Italian Americans had been fans of the game before the arrival of Lazzeri. Fellow San Francisco native Ping Bodie (Francisco Pezzolo) had been popular with fans in his nine-year-career with the White Sox and Yankees between 1911 and 1921, as much for his colorful personality as for his on-field performance. And Babe Pinelli, the Cincinnati Reds second baseman from 1922 to 1927, was cheered by local Italians who formed the Pinelli Rooters Club.

"However, prior to Lazzeri's sudden fame in 1926, the great majority of immigrant Italians, who had little if any tradition of sports in the old country, considered baseball to be a waste of time and discouraged their sons from playing. now suddenly they had someone in the national spotlight they could be proud of. One of their own was even rivaling the incomparable Bambino as the most popular player in the game. Not content to just read about the young star from California, for the first time thousands of first- and second-generation Italian Americans were heading to ballparks throughout the AL, cheering Lazzeri to "Poosh 'Em Up" and waving the Italian flag." 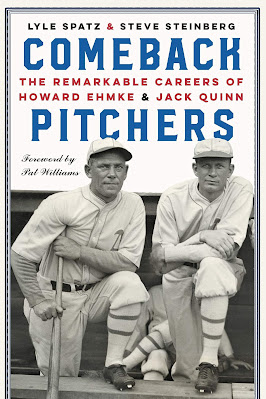 By Lyle Spatz and Steve Steinberg; foreword by Pat Williams

The careers of pitchers Jack Quinn and Howard Ehmke began in the Deadball Era and peaked in the 1920s, and they are forever linked because they were teammated on both the cellar-dwelling Boston Red Sox and later with the Philadelphia Athletics, and were part of their a world championship team in 1929, guided by their legendary Manager, Connie Mack.

As far back as 1912, when he was just twenty-nine, Quinn was told he was too old to play and on the downward side of his career. Because of his determination, work ethic, outlook on life, and physical conditioning, he continued to excel. In his midthirties, then late thirties, he overcame the naysayers. At the age of forty-six, he became the oldest pitcher to start a World Series game. When he finally retired in 1933 at the age of fifty, the "Merhuselah of the Mound" earned numerous longevity records, some of which still stand today.

Ehmke faced the same doubts as Quinn did, and was dismissed by the experts and many teams before battling through arm trouble and poor health to return and excel. He overcame his physical issues by developing new pitches and pitching motions and capped his career with a stunning performance in the first game of the 1929 World Series against the Chicago Cubs, which still ranks among one of baseball's best games. Mack said it was his greatest day in baseball.

Quinn had multiple stints with the Yankees, from 1909 to 1912, and then returned in 1919 as the team was on its ascent, and was part of their American League championship team in 1921.

Spatz and Steinberg write of Quinn's return to the Yankees: "Jack Quinn must have felt an enormous sense of satisfaction when he arrived at the Yankees' spring training came in Jacksonville, Florida, in March 1919. Ten years after he first joined the team in Macon, Georgia, he was back. And he was returning to a club with far wealthier owners than those of the 1909 Yankees. Like Howard Ehmke, he was a survivor, a member of an exceedingly small fraternity of Federal League pitchers who were still in the Majors.

Just before Christmas 1918, Yankees manager Miller Huggins told reporters that he was counting on Quinn to be a regular in his rotation. 'Quinn is a veteran, to be sure,' wrote a reporter, 'but he has remarkable speed, fine control, and a fast ball that promises much for the Yanks.' Just four days earlier Huggins had traded starter Ray Caldwell to the Red Sox, after he concluded that the pitcher's drinking problems and resultant disruptive behavior were not going away. When the Yankees were unable to sign Dutch Leonard, one of the Boston pitchers they received in return, Quinn's importance in the rotation became even greater...

Jack Quinn was already one of the oldest pitchers in the game. While his exact age was not known, it was accepted that he was in his midthirties. (Later research showed he would turn thirty-five that summer.) References to his age, some jocular, began to reappear.  Al Munro Elias, known as the 'Longfellow of baseball statisticians,' said, 'Hardly a man is alive who saw Jack Quinn first arrive [in New York].'

F.C. Lane, the editor of Baseball Magazine, explained why Quinn was able to pitch effectively as he got older: 'A powerful physique, an iron endurance, an easy delivery, and a placid mind are the four cardinal causes of his prolonged activities in the big show.' Quinn had another key element that made him effective: his off-season regimen. While many players relaxed in the winter and reported to spring training business,' he said, 'and keeping myself fit to play it is an all-year-round proposition with me.' Besides a lot of hunting and hiking, he regularly got in front of a mirror and went through his pitching motions...

Quinn had built a reputation as a cold-weather pitcher. He was said to have problems as the weather and the hitters heated up. Perhaps the issue was more mental than physical: after all, he grew up in the searing heat of the coal mines. Yet this season he ran off a five-game win streak in late June and early July. He beat the Cleveland Indians July 10, finally prevailing in a 1-0 game, and led the American League with a 1.40 earned run average.

When Quinn beat the Tigers on June 11, New York fans booed the losing pitcher, Dutch Leonard, who had refused to sign with the Yankees. A month later, on July 14, Quinn again faced Leonard, this time in Detroit, and again pitched well. But the Yankees' offense slumped during a road trip that was becoming 'a prolonged disaster,' and Quinn lost, 3-0. The game was also notable because the mild-mannered Quinn almost came to blows with Detroit's young first baseman and future Hall of Famer Harry Heilmann. When Heilmann mistook Quinn's inside pitch for a beanball, he had harsh words with the pitcher. Quinn came off the mound ready to fight, but veteran umpire Billy Evans stepped between them."