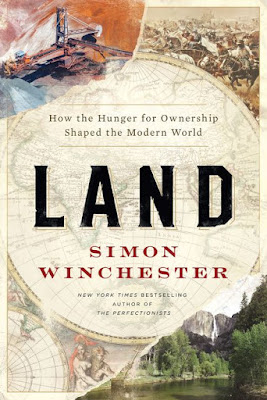 Land: How the Hunger for Ownership Shaped the Modern World

Simon Winchester, the renowned author of The Professor and the Madman and The Perfectionists, explores the idea of property and people's proprietary relationship with land, through human history, how it has shaped us and what it means for the future.

Land is central to our existence, and that is true in all its forms, whether meadow or mountainside, desert or peat bog, parkland or pasture, suburb or city.

Winchester, with his usual keen intellect, insatiable curiosity, and narrative verve, examines what human beings have done, and are doing, with the billions of acres that make up the solid surface of our planet.

Land delves into how we acquire land, how we steward it, how and why it is battled over, and how it can ultimately be shared. The big question Winchester attemps to answer is, who actually owns the land - and why does it matter?

In this excerpt, Winchester writes of how buying land in Connecticut prompted this thinking of how New England has evolved: "Like all land and all landscapes, everywhere, mine has a story to tell. It has not always been owned. Nor, for that matter, has it always been land.

The exposed bedrock in this particular part of North America is extremely ancient. Those benches and ledges of hard and lichen-draped rock that I can see poking out from the thin skin of forest soil, from among the dead leaves and mosses on the floor - as well as the clues offered by boulders piled in the surrounding walls - are considerably more ancient than in most of the rest of the country. They are very more varied, too. In these square miles of rural New York State more than one hundred different rock formations have been described by geologists who, for decades past, have tramped enthralled across these hills and along the river valleys, exploring with their hammers and magnifying glasses and bottles of acid with their compasses and climometers and their all-too-keen eyes.

The story that these New England rocks tell is one of hundreds of millions of years of geological turmoil executed on a titanic scale. It is a tortured and spectacular history that begins with volcanic land formation, then is given over to eons of sudden fracturing, splitting, compressing, heating, pummeling, twisting, folding, and breaking, followed by millions more years of inundations by tropical seas, with the much altered first rocks now covered by thousands of feet of deposited new materials, after which and all in good time there were long periods of slow upward thrusting to the surface, further long drownings, and then immense and violent collisions with other bodies of rock that were either broadly similar to or else very different from the first formed fragments of the volcanic crust.

All of this activity, and all of these processes, helped to forge and deposit what are today's New England rocks - what is today's New England land - and it forced these rocks together in the improbable mash-up of granites and limestones and shales and sandstones and basalts that now extend from the Hudson River valley to the Atlantic Ocean. This part of what in today's world is located well inside the Northern Hemisphere lies essentially halfway between the North Pole and the equator. My three one-billionths possession of the total land-and-sea planetary surface stands at 41.8 degrees north latitude - halfway to the Pole would be 45 degrees, so it is a little to the south of the center point. It is a stark reminder of the topsy-turvy nature of the prior workings of the planet that all of the building that put my land where it is today actually took place in the Southern Hemisphere, close to the old South Pole, thousands of miles away from where the land has ended up today. The beginnings of my tract of land were both long ago and far away.

Very long ago. Basically, the hill up which I came to like to trudge was one very close to - I like to think it actually was - the extreme edge of Laurentia, one of the world's earliest continents. Laurentia was not the oldest of the continents, not by a long chalk - Kenorland, Nuna, Ur are the names give to even older such bodies, with the calculated oldest of them all, Vaalbara, rising from the hot primeval ocean about 3.6 billion years ago, only a billion years, a mere temporal bagatelle, after the world itself first formed.

Laurentia is very much younger than this, and is now known to have been just a fragment of a gigantic supercontinent that Russian geophysicists, specialists in the mind-bending subtleties of tectonic forensics, named Rodinia, the mother ship of the modern world. This huge body of proto-real estate was created about a billion years ago and then promptly - after just 250 million years, a blink of an eye in the cosmic scheme of things - broke into two, giving us first Gondwana, which remained in the south and went on to spawn progeny that included Australia, Antarctica, and India; and then the second, my piece of land's particular birth mother, Laurentia, which then drifted with due majesty, up and into the Northern Hemisphere."