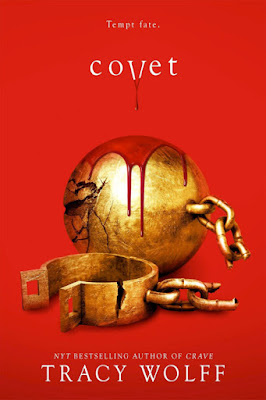 Tracy Wolff is the New York Times and USA Today bestselling author of sixty-four novels that run the gamut from young adult action adventures to new adult romance and from women's fiction to erotica. Tracy, a long-time devotee of vampires, dragons, and all things that go bump in the night, loves nothing more than combining her affection for paranormal creatures with her love of writing tortured heroes and strong heroines.

Last year, Tracy released Crave, the first book in what will be a four-part series. Crush, which came out last fall, was the sequel, and now Covet, which was released earlier this month, is the third book of this incredibly compelling series.

In Covet, Tracy continues to deliver her fresh, fierce, and feminist take on the mythology of vampires, werewolves, witches, dragons, and many more supernatural creatures to be revealed at Katmere Academy, a boarding school for unusual teenagers in Alaska.

Heroine Grace Foster has come into her own power, both literally and metaphorically. She discovers and harnesses her unique supernatural gifts, learns to navigate the baffling social politics of her school's warring factions, and confronts how she really feels about dreamy vampire prince Jaxon and his exiled brother Hudson.

Wolff says of the world she created: "I was so excited to write the Crave series because I've always wanted to do a vampire series. But so many great writers have done vampire books before that I didn't want to attempt it until I had what I thought was a really strong and new story. Then one day, Jaxon and Grace and Flint came along...and here we are! I hope readers feel the enthusiasm, love and energy that went into creating the fantastical world of Katmere Academy. I also hope they see themselves in at least one of the characters - whether that character is a dragon or a witch or a shifter or a vampire, or even a human. I'm a big believer that our differences make us unique and wonderful, but in the end, we have a lot more in common than we think, and it is those commonalities that help us breach even the deepest of divides to create a better world."

The Crave series must be read in order to fully enjoy it, but it is not too long to see how it will turn out, as the fourth and final book in the series, Court, is coming out this fall.