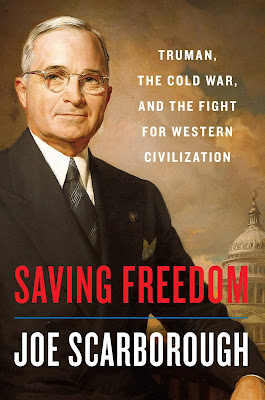 Saving Freedom: Truman, the Cold War, and the Fight for Western Civilization

There are moments where leaders hear the call of history, and that was especially true for President Harry Truman in the 1940s when he was tasked with uniting the Western world against Soviet communism.

"In the long run, the strength of our free society, and our ideals, will prevail over a system that has neither respect for neither God nor man," Truman said of what the United States faced during the Cold War.

To achieve this, Truman first had to rally Republicans and Democrats behind America's most dramatic foreign policy shift since George Washington delivered his farewell address.

Joe Scarborough, former Congressman from Florida and host of MSNBC's "Morning Joe," in his new book Saving Freedom, attempts to ask the question, How did one of the least prepared presidents to walk into the Oval Office become one of its most successful? He recounts the historic forces that moved Truman toward his country's long twilight struggle against Soviet communism, and how this untested president acted decisively to build a lasting coalition that would influence America's foreign policy for generations to come.

Scarborough writes of Truman's enduring legacy, "Ronald Reagan and George H.W. Bush may have expedited and managed the Cold War's end, but it was Harry Truman whom history called upon to engage the Soviet Union in a struggle for world supremacy during a time when most Americans were war-weary and exhausted by their role in resolving the endless tragedies of twentieth-century Europe. Truman knew ignoring Stalin's expansion across Central Europe was as unwise as the appeasing of Hitler's advances across that same continent a decade earlier; and yet, like his predecessor Franklin Roosevelt in the lead-up to World War II, Truman faced resistance from Republicans in Congress and progressives in his own party. Worse yet, many of Truman's own allies considered the new president ill equipped to confront Soviet expansionism and lead America through the postwar crises it would soon confront."

In 1947, the Soviet Union had moved from being America's uneasy ally in the Second World War to its most feared enemy. with Joseph Stalin's ambitions pushing westward, Turkey was pressured from the east while communist revolutionaries overran Greece. The British Empire was battered from its war with Hitler and suddenly teetering on the brink of financial ruin.

Only the United States could afford to defend freedom in the West, and the effort was spearheaded by a president who hadn't even been elected to that office. He ascended to the presidency when the renowned Franklin D. Roosevelt died in April 1945.

Truman would wage a domestic political battle that had the highest of stakes, inspiring friends and foes alike to join in his crusade to defend democracy across the globe.

On March 12, 1947, in an address before a joint session of Congress, Truman announced a policy of containment that would soon become known as the Truman Doctrine. It pledged that the United States would "support free peoples who are resisting attempted subjugaton by armed minorities or by outside pressures."

Before this, for 150 years, the United States practiced isolationism, and it was this radical shift by Truman that proved to be the pivotal moment that guaranteed Western Europe's freedom, the American Century's rise, and the eventual collapse of the Soviet Union.

It was a moment that saw patriotic Americans work together to defeat tyranny, and for Truman, it was a personal triumph over the personal and political struggles that confronted him following his ascension to the presidency. It is an inspiring tale of American leadership, fierce determination, bipartisan unity, and courage in the face of the rising Soviet threat.

Scarborough writes of Truman's continuing influence on world affairs, "The twelve presidents who followed the man from Independence inherited an international stage shaped by Truman's policies. Joseph Stalin's plans for expansion into Western Europe were undermined by containment, the Marshall Plan, the formation of NATO, the Berlin Airlift, and yes, the Truman Doctrine. The thirty-third president's decision to draft the disgraced former president Herbert Hoover to lead America's response to the European refugee crisis following World War II led to the two presidents saving more lives 'than any two players on the world stage.' As Nancy Gibbs and Michael Duffy wrote in The Presidents Club, Truman and Hoover's heroic work in feeding millions left starving across Europe after the war carried with it both a humanitarian and a strategic purpose. 'Bare subsistence meant hunger, and hunger meant communism,' Hoover told Truman. The Democratic president agreed and used the powers of his office to bring and end to that epic suffering that was crippling Europe. Taken together, the words, actions, policies, and legislation of Truman saved millions of lives across Europe and assured that millions liberated from Hitler by Allied forces would remain free in the postwar world. Even the lands enslaved by Soviet communism after the war would eventually be liberated because alliances and international structures left in place by Truman, in time, would lead to the Berlin Wall's collapse in 1989 and the Soviet Union's demise."