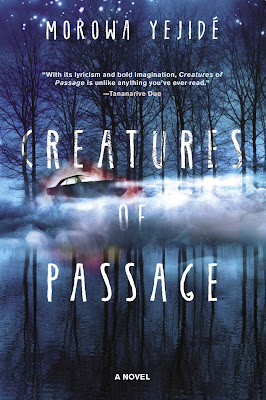 Morowa Yejide is the author of the critically acclaimed novel Time of the Locust, which was a 2012 finalist for the PEN/Bellwether Prize, long-listed for the 2015 PEN/Bingham Prize, and a nominee for a 2015 NAACP Image Award. She is a Washington, DC, native who resides in the area with her husband and three sons.

Creatures of Passage is Yejide's second novel, and it focuses on Nephthys Kinwell, who is a taxi driver of sorts in Washington, DC. She ferries passengers in a 1967 Plymouth Belvedere with a ghost in the trunk. The endless rides, as well as alcohol, help her manage her grief over the death of her twin brother, Osiris, who was murdered and dumped in the Anacostia River.

When the novel opens in 1977, unbeknownst to Nephthys, her estranged great-nephew, ten-year-old Dash, is finding himself drawn to the banks of the same river. Dash is reeling from having witnessed an act of molestation at his school, but still questions what he saw. When he is at the Anacostia River, he has conversations with a mysterious figure he calls the "River Man."

When Dash arrives unexpectedly at Nephthys's door bearing a cryptic note about his unusual conversations with the River Man, Nephthys must face what frightens her most.

This deeply captivating work shows an unseen Washington filled with otherworldly landscapes, flawed super-humans, and reluctant ghosts. A community comes together intent on saving one young boy in order to reclaim itself.

My family came to Washington, DC, from the South at the turn of the twentieth century. I imagine the leaps of faith taken, the great triumphs, and the losses suffered. My grandmother was among the first female cab drivers in the city, one of three. The early seeds of what became Creatures of Passage grew out of wondering about the people who got into her car, the stories attached to the places she took them, and the kind of fortitude it must have taken for her to drive through the adversities she endured.

More seeds grew when I was nursing my youngest son. Perhaps it was looking into his four-week-old eyes and feeling like he was going to be the "last one," the final being that my husband and I would create, that made the concepts of time and existence loom large in my mind and become the anchors of the book. It's the kind of story I don't think I could have written as my younger self, when I was at the start of so many journeys, so concerned with which door to walk through. This story has taken me through many passages over the years - only to discover that some things have permanence and others are fleeting. It is permanence that became the currency of the book, where the characters are my meditations on what we gain and what we lose as we move from one phase to another, one era to the next.

DC is a place where people live out their lives, where all kinds of forces are at play. I wanted to write a story about the unseen Washington - apart from its monolithic image. I've watched it morph over the years, along with my chapters. But I can still see the city as it looked through my own young eyes on summer days - a timeless place of terror and wonder and mystical sites filled with people capable of almost anything.

TONIGHT - Tuesday March 16 at 7:00 PM eastern - Mahogany Books of Washington, DC will he holding a virtual event in which Yejide launches Creatures of Passage in conversation with Mahogany Books co-owner Derrick Young.

Thursday, March 25th at 7:00 PM eastern - River Bend Bookshop of Glastonbury, CT, will be hosting a virtual event with Yejide and Tananarive Due, author of My Soul to Keep. They discuss their new books in a discussion moderated by Mary Kay Zuravleff.

Thursday, April 1st at 7:00 PM eastern - Bookmarks of Winston-Salem, NC, is holding a virtual event in which Yejide will be in conversation with Bernice L. McFadden, author of Praise Song for the Butterflies.

Wednesday, April 7th at 6:00 PM eastern - Loyalty Bookstore of Washington, DC, is presenting a virtual event in which Yejide will be in conversation with Jeffrey Renard Allen. Full details TBA.

Thursday, April 8th at 7:00 PM eastern - The Ivy Bookshop in Baltimore, MD, is hosting an event for Yejide on Zoom. Please visit The Ivy Bookshop's website (theivybookshop.com) to register for the event.