Books: "How To Watch Basketball Like A Genius" By Nick Greene 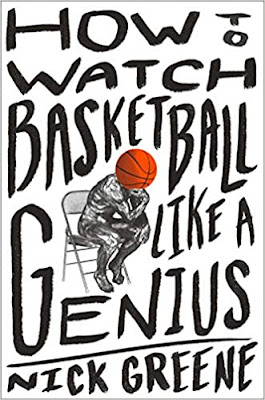 How To Watch Basketball Like A Genius: What Game Designers, Economists, Ballet Choreographers, and Theoretical Astrophysicists Reveal About the Greatest Game on Earth

Basketball is a game that can mean many things to people, with its combination of athleticism, craftiness, rules, intangibles, and superstardom making it a game of culture, art, and all the things that make us human.

In the very insightful and engaging new book, How To Watch Basketball Like A Genius, Nick Greene, a contributing writer at Slate and former web editor of the Village Voice, deconstructs the sport from top to bottom and puts it back together again. He details its intricacies through reporting and dozens of interviews with experts.

The thing with this book that sets it apart is that the experts are not the usual suspects on ESPN, but a soap opera casting director weighing in on the game's most prolific floppers, magicians analyzing Chris Paul's mystifying dribbling techniques, cartographers breaking down Steph Curry's deadeye three-point shooting, and plenty more.

Every chapter treats an aspect of the game of basketball to a multi-disciplined study that goes beyond the lines of the court to examine key elements of the sport from some surprising and revealing angles. You will also learn quite a bit of history along the way, including about the sport's founder, James Naismith, and a lot of it which predates the NBA, which started play in 1947.

In this excerpt, Greene writes of one of the parts of the game that provokes the most excitement: "Dunks are audacious feats of grace and athleticism, but the first dunk in history was just plain audacious. Recall that, for a period in the early twentieth century, there were no out of bounds markings. Courts were instead enclosed inside cages, and it was this feature that allowed New York baller Jack Inglis to soar during a game in the 1910s. According to author Bill Gutman, Inglis 'jumped up alongside the basket, grabbed the cage, and pulled himself up alongside the basket. While the defenders looked up at him helplessly, a teammate passed him the ball. Inglis caught it while hanging on to the cage with one hand and dropped it through the basket.' According to Gutman's book, 'It was a perfectly legal play, because no one had ever seen it done before.'

Legal or not, that shouldn't count as the first dunk. Much like finding the identity of the jump shot's inventor, the provenance of the slam dunk is murky. Anyone with the ability to rise above the hoop should have been able to do it, but reports are surprisingly rare. 'We all could jump high enough, but we never envisioned dong anything like dunking the ball,' John Isaacs, a player on the all-Black traveling New York Renaissance (aka New York Rens) team in the 1930s, told a reporter in 2004. 'All we wanted was the basket.'

What's more, there wasn't even a word for the move until 1936. That's when New York Times writer Arthur J. Daley got to watch the U.S. Olympic team train at the West Side YMCA before the Berlin Games. There he saw Texan Joe Fortenberry, who stood either six feet seven inches or six feet eight inches tall (reports vary), and the six-foot-nine Willard Schmidt show off their athleticism. The men 'did not use an ordinary curling toss,' wrote Daley. 'Not those giants. They left the floor, reached up and pitched the ball downward into the hoop, much like a cafeteria customer dunking a roll in coffee.'

Fortenberry left his job with a Kansas oil refinery in order to captain his country's team that summer. It was a good decision. He scored eight of the United States' points during its 19-8 win over Canada in the gold medal game. James Naismith was in Berlin to watch in person, and the old man saw a peculiar version of his sport, one that was played on a muddy court in the driving rain. As Fortenberry told the Amarillo Globe-News, 'Adolf Hitler said it was an outside game and that's where we were going to play it.' History's greatest monster loved streetball, apparently.

Fortenberry was a precursor to Mikan and Chamberlain, a giant who managed to make the sport look so easy that his opponents protested his very existence. After the Olympics, a group of humiliated teams unsuccessfully lobbied basketball's international governing body to impose a height limit of six feet two inches for all competitions.

Height was an obvious advantage in basketball, but Fortenberry had the special combination of size, speed, and coordination that allowed him to dominate at both ends of the floor. He was the prototypical 'athletic big man,' and journalists treated him like a walking oxymoron. '[I]n spite of this height and his awkward, lumbering appearance, [he] is the best all-around athlete at West Texas State Teachers College,' the Associated Pres quipped in 1933. Fortenberry was the school's heavyweight boxing champion and a standout gridiron receiver, but his sui generis feats on the hardwood garnered national recognition. In the words of the Associated Press, he 'slaps at a basketball much as a cub bear would at a bobbing apple.' How terrifyingly charming.

Whether you think of the move as dunking a roll into coffee or an ursine apple-slap, Fortenberry's use of it represented an evolutionary leap in how the game was played. It's why that New York Times reporter dedicated a significant chunk of his article on the U.S. Olympic team to the soaring centers who 'left observers simply flabbergasted' at practice. As writer Michael McKnight explained in a 2015 Sports Illustrated story, '[Fortenberry] may not have been the first man to dunk a basketball, but he was the first to do it in an aesthetically stirring way, and in front of the right people.'

A dunk is a stunning thing to behold. When the Wright Brothers made history at Kitty Hawk on December 17, 1903, their aircraft ascended to an altitude of ten feet, and this achievement was deemed worthy of the term flight. Naismith, meanwhile, hung his peach baskets at that same lofty mark. He nailed them to a balcony, a structure that is out of reach by design. Humans really have no business meddling up there without the use of stairs or stepladders."